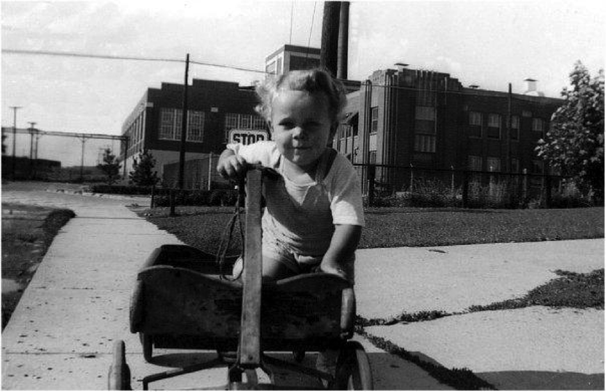 John Baycroft drives his wagon southbound onThird Street in New Toronto in the late 1940s. Behind him is the 1931 Campbell’s Soup plant at 60 Birmingham Street, which still operates there today. [Courtesy: John Baycroft]
Sometimes a single photo can speak to several different aspects of history, as this one does. Initially, we can’t help but be charmed the blond, curly-haired boy driving his wagon down Third Street in New Toronto. His name is John Baycroft, and he’s in front of the driveway to his own house at Number 117. John is the third of the four children of Gordon and Doreen Baycroft, and grandson to William and Edith Baycroft. William left his furniture and undertaking business in Beeton, Ontario, in 1921 and established W.E. Baycroft and Sons Funeral Home in a large house on the northeast corner of Lake Shore Blvd. W. and Fourteenth Street. In 1947, he sold the business to Art Ridley and it became Ridley’s Funeral Home, which still operates on that site today.

Gordon Baycroft’s two brothers entered the funeral business with their father, but Gordon left to join the Royal Bank instead. In 1924, he took a position with Reginald N. Boxer Wallpaper Manufacturers on Eight Street where he worked for 42 years. Like his father before him, Gordon was elected to the New Toronto School Board for two years, and then in 1948, was elected councillor, a position he held every year but one until 1964. In 1951, he designed and built a new house for his family at Number 9 on a new street he had helped name, Maple Boulevard, just a block east of the site where John is riding his wagon.

Behind John in this picture is the large factory of Campbell Soup at 60 Birmingham Street. The Joseph Campbell Preserve Company was founded in Camden, New Jersey, in 1876. The invention of condensed soup in 1897 revolutionized Campbell’s business as people now had a new way to easily and quickly feed their families.

Campbell’s Soup came to Canada in 1930, buying a lot at the north end of Third Street for their first Canadian location. Architects Mathers and Holdenby designed a distinctive Art Deco building that opened in 1931 with 150 employees. Vegetable soup was the first variety produced, and today 70% of of the vegetables they use are still grown within a three hour drive of this plant. By 1963, Campbell’s had expanded to meet market demand and employed 1650 people. Today, Campbell’s is the last of the original large employers in New Toronto to survive, and its 1300 employees supply products all across Canada.