Once Visionary Thorncrest Village a Victim of Modern Development 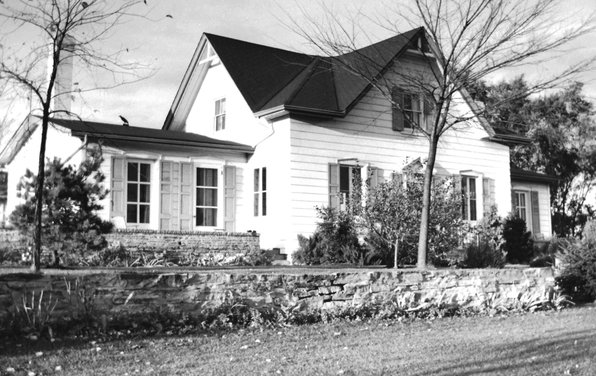 “Thorncrest Park”, the 1854 summer home of Sir William Pearce Howland, Father of Confederation, as it looked in the 1950s. [Courtesy: Montgomery’s Inn]
In 1840, an enterprising young man named William Pearce Howland leased 40 hectares of farmland between Islington and Kipling Avenues, north of Rathburn Road, as a summer estate he named “Thorncrest Park.” He purchased the property in 1853, and the following year built the frame house seen in the above photo. Built in an Ontario vernacular style, it had a multi-gabled roof decorated with classical brackets and an elegant front entrance with flush columns and a pediment. Unseen under the siding was a rare “stacked plank” style of wood construction.

Howland had been born in New York in 1811, but immigrated to Canada in 1830, becoming a British subject in 1841. In 1845, he built a large flour mill on Dundas Street, just east of the Humber River, naming it Lambton Mills. His primary residence was a large red brick house just north of his mill. He went on to serve as an MPP 1857-68 and as Ontario’s second Lieutenant Governor 1868-73. He was also a Father of Confederation and was knighted in 1879.

Howland sold Thorncrest Park in 1868 to Janet Douglas, mother-in-law of William Montgomery, Thomas Montgomery’s son. It remained in the Montgomery family until 1942 and in 1945 was purchased by visionary developer Marshall Foss.

Foss hired ground-breaking planner Eugene Faludi to design his new development called “Thorncrest Village.” Faludi’s plan included a long twisting main street with cul-de-sacs running from it. Prospective homebuyers had to be approved, as did all house designs. Preferred plans were single story “ranch style” dwellings with in-floor radiant heating but no basements. Each lot was half an acre and, to maintain a green appearance, no fences were allowed... hedges only. Howland’s original “Thorncrest Park” home was retained, and Sir William’s Lane was named after him.   Some realtors, mortgage investors, municipal engineers, and potential buyers found fault with Faludi’s plan. However the appeal to progress that this unique development represented attracted many buyers and all 180 lots were sold.

Restrictions were put on all deeds for 30 years to maintain Faludi’s standards, but these had all expired by the 1970s. Little by little, original rules have gone by the wayside and many houses have been replaced by larger, taller homes that are changing the character of Thorncrest Village.
​
Howland’s original “Thorncrest Park” house was of historical importance for its connection to a Father of Confederation, as well as its stacked plank construction.  Despite protests from the community, it was demolished in 1999 and replaced with a new house.