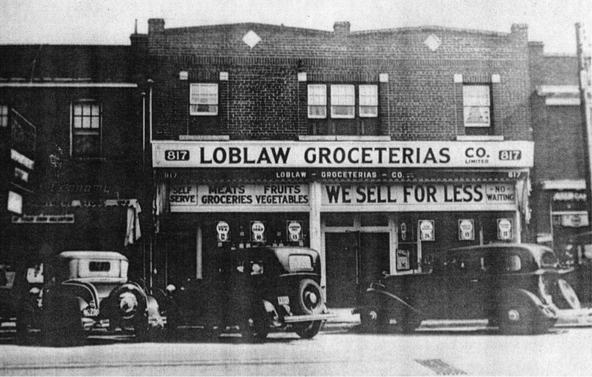 Loblaw Groceteria in New Toronto was located on the south side of  Lakeshore Road, between Fifth and Sixth Streets. The company had been established in 1919 with a new concept: the introduction of self-shoppong, so customers would no longer have to wait while a clerk fetched goods from behind the counter. Critics said it would never work, but by 1928 when this photo was taken, there were 70 stores in Ontario. One of the signs says “NO WAITING”, highlighting Loblaw’s main advantage. Today, Loblaw is gone and the owners of this store (now 2879 Lake Shore Blvd. W.) sell furniture. (Courtesy: Montgomery’s Inn)