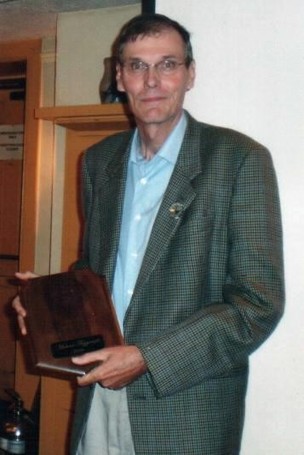 Michael FitzGerald is receiving 2010 Jean Hibbert Memorial Award for his work in restoring two heritage properties he owns in Etobicoke and taking steps to ensure their continued preservation for future generations.

Mike has been a member of Etobicoke Historical Society (EHS) for many years and has been Editor of our newsletter, The Aldernews, for two years. He has had a long time interest in Etobicoke history.

He is a descendant of the Etobicoke Grubb(e) family, being the great-great-great-grandson of the original settler, John Grubb, who moved here from Edinburgh in 1833 and purchased several hundred acres of land in the area that became known as Thistletown.  In 1987 Mike's mother, the late Janet Grubbe Fitzgerald, compiled their fascinating family history inThe Grubb Pioneers of Etobicoke.

Mike is the owner of two adjacent homes in Thistletown (19 and 23 Jason Road) known collectively as "Elm Bank".  No. 19 was built by Grubb in 1834 and is one of Toronto's very early dwellings.  No. 23 was built by an earlier owner between 1800 and 1820 and is one of the five oldest heritage buildings in all of Toronto.

Concerned that there might be a time in the future when Elm Bank could be endangered by development, in February 2007 Mike took the rare, proactive step of approaching the City of Toronto's Heritage Preservation Services Department directly to request that his two houses be designated under the Ontario Heritage Act. He worked with them to gather the required documentation for presentation to Toronto Council.  After working through this labour-intensive process over the next year, by-laws to designate both houses were approved by Council on January 30, 2008.

To maintain the heritage elements of his houses, Mike has independently undertaken multiple restoration projects over the 35 years he has lived there.   He also applied for and received a Heritage Preservation Grant, which was used to restore five original windows in the older house.

By speaking to historical and other groups about his houses and his experiences in getting them designated, Mike has been a role model and incentive for others interested in taking the initiative to get their own homes designated. He has recently finished expanding on the research Janet FitzGerald started on his family and properties. He is currently updating the book that his Mother wrote, and will be republishing it soon.

For his love of heritage, his work in restoring his properties, and the example he has set by obtaining legal designations to help ensure the preservation of these properties for future generations, we present Mike FitzGerald with the 2010 Jean Hibbert Memorial Award.