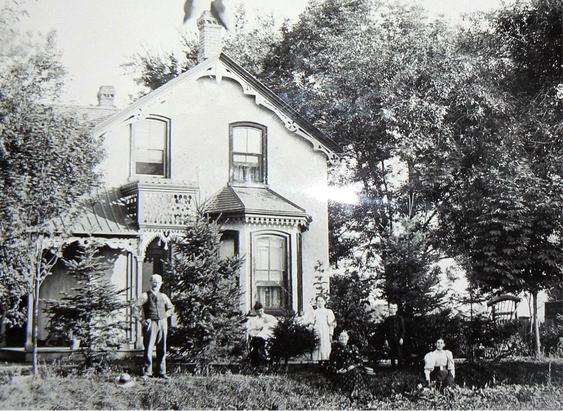 The Creech family home in Lambton Mills at 4245 Dundas St. W. in 1896, now demolished. Left to right: Meade Creech, Mrs. Joseph (Mary Ellen) Creech holding son William, Josephine Creech, Mrs. Meade (Charlotte) Creech, George Creech, Marie Storey (Mary Ellen’s sister.) Courtesy: MONTGOMERY’S INN
Meade Creech… a distinctive name for a distinctive and talented man in Etobicoke’s history! His parents, Robert and Ellen, emigrated from Ireland in 1829 when he was five. After four years in Philadelphia, they moved to York Township where Robert worked as a miller near Weston. In 1843, the family moved into an existing house on the south side of Dundas, just west of Prince Edward Dr. in Lambton Mills. Meade married Charlotte McCammon in 1850 and they lived with his parents.

Meade decided early on that he wanted to be a builder, and set about learning everything he could about the trade. He had no formal training, nor did he serve an apprenticeship. Initially he worked building houses in the local area, and as he gained more knowledge, he started designing buildings as well. There was no formal certification process for architects at that time. His first major commission in 1870 was to design and build a  schoolhouse in Eatonville, on the northwest corner of today’s Bloor St. W. and Highway 427.

​In 1874, he built a brick schoolhouse in Lambton Mills, on the same property where Lambton-Kingsway School is today. Because the local Methodist Church had no musical instrument and Meade greatly loved music, he decided to build the church a pipe organ from scratch.  Using trial and error, the task took two years to complete, but he was successful. In 1877 he built a new Lambton Mills Methodist Church on Dundas St. W.  A Masonic Lodge for the local branch came next in 1882, located about the middle of today’s Kingsway Mills plaza. Sadly, all of these buildings are gome but one… the former Methodist Church still exists with its rose window visible above a retail store addition at 4160 Dundas St. W. Meade continued to design and build houses, including a new house for his family in 1885 that you can see in the above photo, located just west of today’s Gibson’s Cleaners.

When Meade passed away in 1896, his son Joseph inherited the house. Joseph had initially joined the building trade with his father, but a serious hand injury forced him to choose a different path. He kept a confectionery store in the family’s old house for 10 years, and then became a salesman for Robertson Confectioners for 40 years, retiring in 1930. Joseph lived in the family home until his death in 1957 at 101 years of age. The house was demolished in 1968, the year after the last remaining Creech resident, Joseph’s daughter Josephine, passed away.