This beautiful heritage home at 631 Evans Avenue was built ca. 1901 from 550 tons of shale and limestone, quarried by hand from the Etobicoke Creek valley by owner, Charles McGillion. 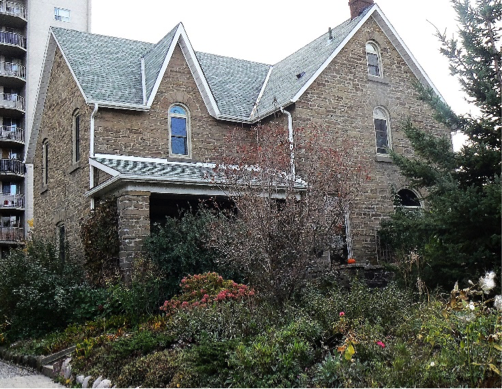 The family appears in the 1861, 1871 and 1881 censuses as farmers in the Alderwood area and they were renting their land during this period.  It wasn’t until 1882 that John and Mary purchased 40 acre Lot 13, Concession II Colonel Smith Tract from Martin Culham. This lot is at the very west end of Middle Road - now called Evans Avenue - just south of today’s Trillium Health Centre. They raised cattle on their farm, butchering their own meat and selling it door-to-door.

​In 1899, their son Charles married Margaret Tracy of West Toronto, and in 1900 they purchased 12 acres of land in Lot 11, Concession II Colonel Smith Tract. Their new property was part of the second lot east of the main family farm, on the south side of Evans Avenue, running west from Brown’s Line. Charles began harvesting stone from the Etobicoke Creek valley to build their new house, transporting it by horse and wagon. The stones are primarily of grey shale with some limestone, laid to a thickness of fifteen inches. These rocks are exposed at several locations along the route of Etobicoke Creek, with shale being more prevalent. 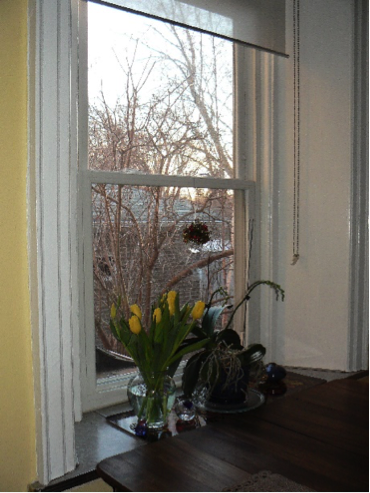 View of recessed kitchen window, showing thickness of the home’s stone walls.
The house was built in the style of a typical Ontario Gothic Revival farm house. However, at two and a half stories, it is taller than many farm houses. It still has cast iron hot water radiator heating. Its L-shaped layout, fourteen foot high ceilings on the main floor, and large main floor windows create a spacious, sunny interior. It has a typical small gable set into the half-storey above a window. Under this is a large, open verandah which gives the home a solid, well-grounded appearance. Less common for this style are its many Romanesque-style windows, topped by expertly-executed arches. 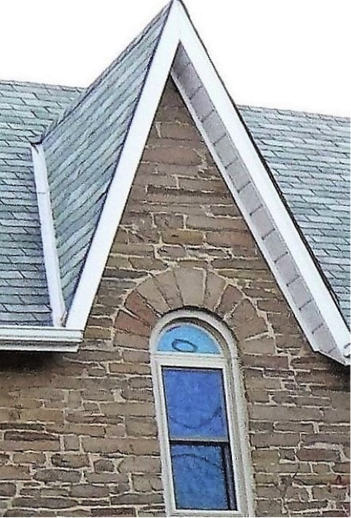 Detail of stone arches in one of the many Romanesque window.
Charles and Margaret farmed their 12 acres, growing vegetables which they sold at local markets and door-to-door. They also planted an apple orchard south of the house. Everyone called Charles “Pa” as he was very popular in the neighbourhood.  He was active in local politics, and participated in ploughing matches, winning many competitions. In addition to building his own house, Charles hauled the stone to build St. Patrick’s Catholic Church in Dixie where he was a member. Charles enjoyed entertaining at community events by playing his violin and calling square dances.

Charles’ siblings all settled in the same general area. James was a market gardener in Long Branch. He married Rose Laughlin and they had four children. Margaret married George Krause and they lived in New Toronto, raising 11 children. Bernard made several trips to Ireland, and in 1909 returned home with a new bride named Margaret. They bought 17 acres of land with a house on the southwest corner of Dixie Road and Middle Road in Mississauga. Descendants lived in that house until 1995.  Bridget and Sarah remained single and continued to live with their parents. Youngest brother, William, died in 1899 at the age of 35.

John McGillion passed away in 1901 and Mary in 1912. The 40 acre farm on Etobicoke Creek, which included two houses and a barn, was willed to Bridget and Sarah, jointly. Bridget died ca. 1927, and Sarah sold the property in 1928, She lived in New Toronto until her death in 1932.

Charles and Margaret had five children: Charles Jr., Bernard, Mary Margaret (married name Dougherty), James, and George.  Two acres of his property had been expropriated for a highway interchange at Brown’s Line and the Queen Elizabeth Way, leaving 10 acres. Between 1928 and 1942, Charles transferred ownership of two acres of land to each of his five children. As a result, at the time of his death in 1950 at the age of 91, his estate had already been dispersed.

James, George and Mary Margaret all sold their portions of land in the early 1950s. A piece went for St. Ambrose Catholic Church on Brown’s Line which opened in 1953.  Another section was sold to the Catholic School Board and St. Ambrose Catholic School was built on Coules Court, west of the church. A lot at the corner of Evans and Brown’s Line was sold to Sunoco for a service station – now owned by PetroCanada. West Alderwood Plaza was built on the land south of the service station. To the west of the plaza, the Cloverleaf Hotel was built in 1953, but has since been replaced by townhomes. After selling their land, James, George and Mary Margaret continued to live on Brown’s Line, close to their former family home.
​
In the 1950s, son Bernard was living on his property at 625 Evans. In 1965 he sold this property and moved into a house on nearby Cutler Crescent. Today an L-shaped apartment building sits on this land, wrapping around the east and south sides of the house at 631 Evans.
In 1939, the eldest son, Charles Jr., received the two acres that included the house at 631 Evans for his inheritance. Charles Jr. and his wife Mary lived in this house until their deaths - Charles in 1983 and Mary in 2005. At the time of Mary’s death, a John McGillion, likely a nephew, was living with her. 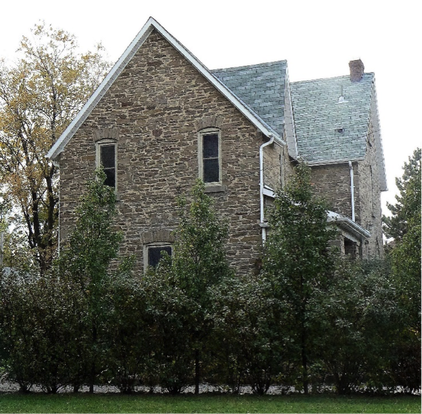 View of house from the east in 2016.
The house was sold out of the family in 2005, purchased first by a woman from the Netherlands. In 2007, she sold the house to its current owners, Vladimir and Irina Lemberg, who immigrated from the Ukraine over 20 years ago with a daughter and both of their mothers. The house was in very poor condition when they purchased it, with broken windows, cracks in the walls and a damp basement.

Today, it is restored and well looked after. Irina works for the Law Society of Upper Canada as the gardener for Osgoode Hall. She also uses her professional skills to create the beautiful gardens that surround their house in Alderwood, and in 2011 she won an award for the best garden in Ward 6. Vladimir works as a computer programmer while writing articles for scientific journals and he is currently working on a book on condensed matter physics.

If you drive by 631 Evans Avenue today, have a look at the many stones that make up its exterior, and think of Charles McGillion who harvested each and every one of them by hand, and transported them to the site of his new house over 115 years ago. This rare shale and limestone dwelling is listed on the City of Toronto’s Heritage Register.