Matthew Court is a street name that goes a long way towards filling a hole that was created in 1947 when Canning Avenue was renamed Cordova Avenue. The 1947 name change was required because Islington Village was getting door-to-door mail delivery, and Canning Avenue already existed in Toronto.  But Canning Avenue had been named originally for Matthew Canning, an exceptional citizen of Etobicoke who still deserves the honour of a street bearing his name.

In August 2012, the Etobicoke York Community Preservation Panel, on which I sit, was asked to comment on the name “Soccer Court” for a new cul-de-sac opening on the northwest corner of Lloyd Manor Road and Firwood Crescent, where Glen Agar Plaza had recently been demolished. I did a little research, and found out that in 1857 Matthew Canning bought the land on which the north part of this new street sits, and he lived there until his death in 1901.   What a great opportunity to honour Matthew Canning anew!  Canning Court wouldn’t work because there is still a Canning Avenue in Toronto, but amazingly there is no street named Matthew or Matthews in Toronto today. There is a short connector street called Mathew Gate with no civic addresses on it, but I feared that its existence might lead our city’s First Responders to reject Matthew Court.  The Preservation Panel decided to submit the name anyway, and we were delighted when it was accepted!

So who was Matthew Canning?  He was the son of Joseph and Catherine Canning, who emigrated from Ireland to New York City, where Matthew was born on January 12, 1827. By 1831, the family had moved to Ontario where Matthew’s sister Catherine was born.  In 1832, Joseph leased 100-acre Lot 17, Concession 1 in Etobicoke, on the north side of Eglinton between Kipling and Martin Grove, in an area called Richview.  Joseph purchased his lot in 1851.

On May 4, 1848, Matthew married Janet Anderson at St. James Anglican Church in Toronto.  Janet was the daughter of Cornelius Anderson who had originally farmed in Hogg’s Hollow before moving to Etobicoke with his family.

In 1856 and 1857, Matthew bought 3 lots near Joseph: Lot 18, Concession I, immediately north of Joseph’s property; Lot 17, Concession II on the northwest corner of Martin Grove and Eglinton; and Lot 14, Concession 1, between Kipling and Martin Grove, half way between Rathburn and Eglinton.  This last lot is where Matthew and Janet chose to live, in a house at the end of a long driveway that ran east off Martin Grove.  When Joseph died in 1865, Matthew also inherited his father’s property.

Matthew and Janet had 12 children - five sons and seven daughters – 11 of whom lived to adulthood.

Matthew was primarily a farmer, but in 1871 he also bought a sawmill on the west bank of the Humber River that had originally been built in 1831 by John Scarlett. There was still a lot of timber available in Etobicoke, particularly black or sweet birch used for ships’ flooring, and pine used to fuel the steam mills that had by then replaced most water mills.

However Matthew’s true calling was as a public servant.  He first joined Etobicoke Township’s Council in 1854, and over the next 30 years he served as Councillor for 16 years, Deputy Reeve for 4 years, and Reeve for 10 years.  He was described as having filled all three offices with “consummate ability” and his popularity earned him the affectionate title “Father of Etobicoke.”  Matthew loved Etobicoke so much that he named his fourth son John Etobicoke Canning. 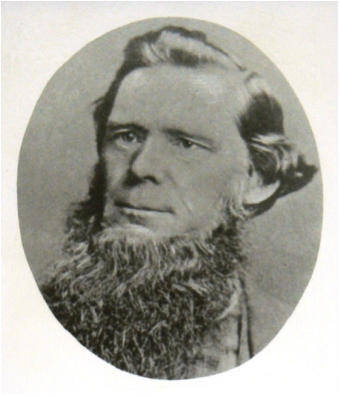 Matthew Canning, Reeve of Etobicoke 1871-2 and 1877-84. This photo still hangs today in the Etobicoke Civic Centre.
Matthew and Janet were generous within the Richview community. For example, they donated the money for a pipe organ for the Stonehouse Methodist Church on Martin Grove in 1855.  In 1874, they donated the land for Richview’s first brick school on the northwest corner of Eglinton and Martin Grove.

Matthew died unexpectedly on February 3, 1901.  The Toronto Star reported his death as follows:  “Blood-poisoning has caused the death of Matthew Canning, ex-Reeve of Etobicoke, at the age of about 76 years.  While splitting wood about a week ago with a wedge and beetle, the head of the beetle flew off and his hand struck the log, wounding his fingers in a seemingly trivial manner.  The funeral will be held on Wednesday.”

Janet died of heart failure on February 17, 1917 at the age of 88.  At the time of her death, she had 74 grandchildren, 54 great-grandchildren, and one great- great-grandchild.  The Toronto Star reported that Janet was buried in Richview Methodist Cemetery, at Highway 27 and Eglinton, which is likely where Matthew rests as well.  No stones mark their graves, but now at least one Etobicoke street will bear Matthew’s name for all to see.