In 1958, developer Marc Cavotti purchased from the Silverthorn family 400 of the thousand acres they had owned since 1809. The family was unable to keep up with the growing tax burden placed on them by the encroaching city: every year that Toronto grew closer, the taxes on their farmland grew higher. The land was eventually sold to the developer for $3 million ($22.3 million in 2011 dollars), which was a steal even in modern costs, considering the value of a single lot in the now developed neighbourhood. The Silverthorn family had requested that a large hardwood forest lot not be destroyed, and as many trees as possible be preserved. That woodlot is now part of the ten acre Millwood Park, on Silverthorne Bush Drive. The land, which was called “Marc’s Land” due to his ownership, soon became “Markland”, which is the origin of the neighbourhood’s name. Its slogan, “A Circle of Friends”, seems to be a play on the fact that Markland Drive, the main street, is a circle off and through which all the other streets run.

Much to Marc Cavotti’s chagrin, he soon discovered that the southern part of his land was a floodplain of the Etobicoke Creek that couldn’t be built on because of laws implemented after Hurricane Hazel. The ever-resourceful developer then decided in 1965 that the land would become the Markland Wood Golf Course. The road which ran through the floodplain, Mill Road, was washed away in the hurricane and never rebuilt. Today Southcreek Road in Mississauga is the original southern extension of Mill Road.

The Markland Wood neighbourhood straddles the historic communities of Summerville and Eatonville, and is characterized by its generous, large wooded lots and its single family bungalows and split level homes. Many of the houses were constructed of grey brick, which has come to be a defining feature of the area. 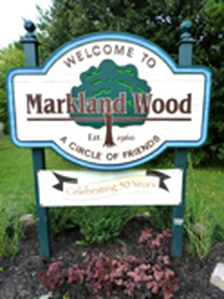 Welcome to Markland Wood "A Circle of Friends".
The neighbourhood’s streets reflect its woodland heritage -  many of them are named after tree varieties, such as Mountain Ash Court, Maple Gate Crescent, The Green Pines, etc.  The nice thing about the area is the fact that it looks pretty much the same as it did when Marc Cavotti packed up his tools and left the completed project. The large houses haven’t been cleared and replaced with “McMansions”. Nor have the lots been subdivided. It’s still one of the greatest areas of the city in which to live.

Researched and Written by Adam Howell
Learn About More Neighborhoods