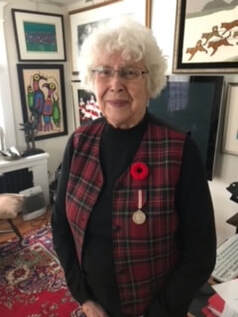 Mary Louise Ashbourne’s passion for heritage, and especially old maps, has its roots in Weston where she was born, married and raised seven children with her husband Howard. Howard collects and exhibits artifacts, while Mary Louise shares her enthusiasm for local history and all aspects of community preservation with everyone.

Mary Louise holds an Honours degree in Modern History from the University of Toronto. She is a founding member (1976) and was President of the Weston Historical Society for over ten years and is now the Past President. An early advocate of heritage, she was among the first to be appointed to the York L.A.C.A.C. in 1977.  She is also a founding member (1991) and Vice President of Heritage York.  As Chair of the Humber Heritage Committee, she was appointed as a representative to the TRCA Humber Watershed Task Force (1995).  Mary Louise was a longstanding volunteer member of the Humber Watershed Alliance established in 1997.

Mary Louise’s community service in support of heritage is wide ranging: advocacy, articles, brochures, displays, publications, exhibitions, heritage walks, heritage talks, and more.  With an eye for fact-checking, Mary Louise has brought her skills as a researcher to all her heritage contributions.  She works in partnership - educating and mentoring others to encourage public interest in heritage. No task is too small.  When volunteers were needed to help clean and restore Lambton House into a habitable space, Mary Louise was hands-on.  Heritage York’s Pub Nights have featured her now-famous home-cooked roast beef sandwiches.  The Annual Montgomery’s Inn Corn Roast & Heritage Fair is always on her calendar.

Over many years Mary Louise has put her passion for Weston and heritage into action.  She and Marjorie Mossman led nature walks on different parts of the Humber River with the Toronto Naturalists Society. In partnership with Cherri Hurst, they gave talks on Hurricane Hazel and numerous History of Weston presentations including, “Weston Structures before 1867 That Are Still With Us”, “The Homefront From WWI”, etc., and about eight walking tours.  Among some of her other involvements, Mary Louise has participated in the creation and/or writing of:

- The Crawford-Jones Memorial Park (City of Toronto Park),
- Weston Memorial School’s 100th anniversary celebrations,
- “A Brief History of Weston”,
- “Etobicoke York Pre-Confederation Architectural Treasures: Surviving Buildings, Cemeteries and Structures”,
- “Crossing the Humber: The Humber River Heritage Bridge Inventory”,
- “City of York: A Local History”,
- “Through the Lens of Geraldine Moodie”, an exhibition at Lambton House,
- Dedication of the Humber River as an Urban Heritage River, and
- Designation of numerous buildings in Weston, York and Etobicoke, and much more.

Please join us in congratulating Mary Louise Ashbourne on being this year’s recipient of the Etobicoke Historical Society’s 2021 Jean Hibbert Award.