Many of you will recognize this house at 4884 Dundas St. W. in Islington, just east of Burnhamthorpe Rd. It is a listed heritage property, yet some aspects of its history have been a bit of a mystery for many years.  It is usually referred to as the “Musson House” and was believed to have been built by Thomas Musson ca. 1860.  However, land records don’t show that Thomas ever owned this property.  There was a time when local residents told stories about going to the post office in this house when Thomas was the Islington postmaster.  It is true that Thomas was the postmaster from 1860 to 1899, but other documents show that the post office was located in Thomas’ general store on the northeast corner of Dundas St. W. and Burnhamthorpe Cres. 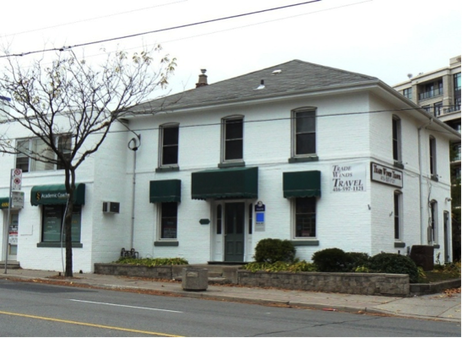 4884 Dundas St. W. in Islington, just east of Burnhamthorpe Rd. - Built in 1880.
How can these apparent contradictions be reconciled?  In starting my research, I had one clue to go on: in 1982, Richard Jordan researched and designed a map that recreated Islington village in 1850. It showed an S. Mather as owner of this property – a name I hadn’t encountered before.

I tackled the land registry records first.  Dundas St. W. runs at an angle through the 100 acres of Lot 8, Concession A and encompasses the east half of Islington village. There is only one set of land records for the entire lot until well into the 20th century.  It’s over 200 pages long and consists of thousands of real estate transactions, many involving the same people multiple times, some with missing or indecipherable property descriptions, others with references to maps that no longer exist, and so on.  But overall, there is certain logic to the records, and I finally found a Sarah Mather who bought a 1/3 acre lot from Thomas Johnston for £22 in December 1848.

Further research revealed that Sarah Mather was the 20 year old daughter of William and Margaret Mather.  The Mather family had emigrated from Scotland to New York in 1838, and then moved to Etobicoke about 1840.  William taught at Eatonville School in 1842, and he may have continued to teach as his death certificate lists his occupation as “school teacher.”  Nevertheless, by 1852, he was also farming a small piece of land he had rented on Burnhamthorpe Rd. just north of Dundas. He and Margaret had 10 children, with the eldest, Sarah, born in Scotland in 1828 and the youngest, Lydia, born in Islington in 1850.  The 1852 census shows them living in a one-storey frame house, which was enlarged to one and a half storeys by 1861.

Alexander lived on a large property in Islington bound by Montgomery Rd., Bloor St., Islington Av. and the CPR tracks.  His house was on the west side of Montgomery Rd., overlooking Mimico Creek. He was the Clerk/Treasurer of Etobicoke Township for 36 years from 1865 to 1901.  In addition, he was a frequent real estate investor. Assessment records indicate that he demolished the Mathers’ frame house and built the brick house at 4884 Dundas St. W. as an income property.  By 1880, it was already rented out. 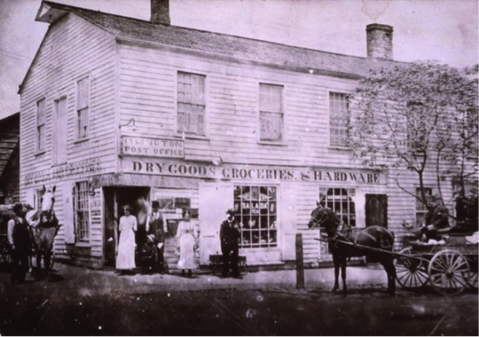 General store and post office in Islington once owned by Thomas and Elizabeth Musson. Photo taken ca.1910 when it was owned by John Dunn.
Edward Musson died in 1871, and there were major delays in settling his estate.  By the 1880s, Thomas Musson was in financial difficult and had three mortgages on the store property.  His creditors foreclosed in 1886, and the store was sold to Richard Morgan through a Power of Sale in 1887.

Thomas and Elizabeth had to move, and they rented the house at 4884 Dundas St. W. from MacPherson. Thomas retained his position as postmaster, because it was tied to him personally, not to the general store. Thomas reopened the post office in a room in the northeast corner of the main floor in his newly rented house.  In the 1920-era photo of the house below, there is a door standing open on the right side of the house which was the entrance to the post office.

The Mussons rented the house for 19 years. When Thomas died in 1899, his wife Elizabeth was appointed postmistress. In 1906, she resigned the position and moved in with one of her sons in Toronto where she lived until her death in 1922.  John Dunn, who bought the general store in 1889, became the new Islington postmaster, and the post office was moved back into its old home in the general store. 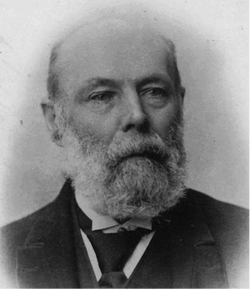 Thomas Musson
Alexander MacPherson died in 1906, and his son and executor, J.A.L. MacPherson, sold the house in 1907 for $2300 to Robert H. Tier Sr., a market gardener who lived on the south side of Dundas, just west of Islington Av.  He rented the house to his son and daughter-in-law, Thomas and Edith Tier, until he sold the property in 1912 to William and Olive Newlove for $3500. 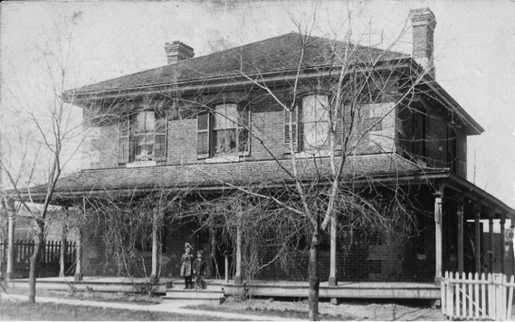 Ca. 1920 photo of 4886 Dundas St. W. taken when owned by William & Olive Newlove.
Islington’s first telephone exchange had opened in 1909 with thee subscribers in Fred Hopkins’ Store, a few doors west of 4884 Dundas. By 1912, the exchange had 38 subscribers and it was moved into the Newlove house with Olive as the full-time operator. The exchange was located in the same room at the back of the house that the post office had occupied earlier.  In the above photo, the pole supporting the southeast corner of the verandah roof bears a sign saying “Telephone”. The exchange remained in that location until 1925 when the Bell Telephone Company opened an office on the second floor of the new Hydro Electric building on the south side of Dundas, where the Goodwill parking lot is today.  Olive continued to work for Bell at this new location.

William and Olive had three children: Their first son, Ivan, died in 1914 at one year of age of gastroenteritis.  Their other two children, Thelma and Dudley, can be seen on the front steps of the house in the above photo. Dudley was an RCAF pilot during World War II and was killed in action in 1942 at the age of 27.  He is buried in Ireland, but there is a memorial plaque for him inside St. George’s Anglican Church on-the-Hill in Islington.

​The Newloves lived in the house until 1942 when they sold it to Gertrude Steele, who then sold it to dentist Dr. Nicholas Brown in 1946.  The house is still owned by Dr. Brown’s widow.  It is divided into several suites that are rented out as office space. 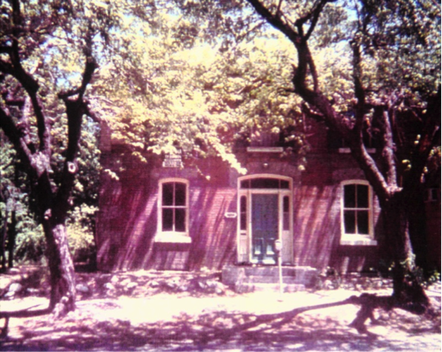 Photo of 4884 Dundas St. W. taken in the 1940s after the verandah was removed, but before the brick was painted white or the addition was built on southwest corner.
When built in 1880, this house displayed many elements of an earlier Regency architectural style: a three-bay symmetrical facade, a bell cast roof over the verandah which wraps around three sides of the house, a hipped roof, and tall chimneys. However the builder also added more modern decorative features, such as Italianate windows and bi-chromatic masonry using red brick as the base colour with yellow brick quoins. The verandah is now gone, and an architecturally unsympathetic addition was built on the southwest corner of the house in the late 1940s. The brickwork on the front and both sides of the house has been painted white, but at the rear of the building you can still see the original red and yellow brick.  The front door still has its original arched sidelights and simulated twisted rope columns of wood.

We can see now that there was a lot of truth in those old stories about 4884 Dundas St. W. Thomas Musson never owned the property, but he and his wife did rent it for 19 years.  Musson didn’t build the house in 1860, but rather Alexander MacPherson built it in 1880.  The post office was located, sequentially, in the general store, then in the house, and then went back to the general store.  For its architecture and the many stories it has to tell about Islington’s history and residents, this property has certainly earned its place on the City’s Heritage Register.

Researched and Written by Denise Harris, All historic photos courtesy of Montgomery’s Inn.