Growing up in New Toronto in the late 50s and early 60s, I would joke that I was 10 before I knew that my name was "Wendy" and not "Lou Gamble's daughter".  You see, my Mother was Gus Ryder's first champion distance swimmer: Lucille (Lou) (Wylie) Gamble. New Toronto was the "hotbed" of swimming in Ontario. My Mother was the middle daughter of Jack and Etta Wylie, who had left the mining town of South Porcupine in Northern Ontario for New Toronto in 1917.  She was born on March 2, 1920, in a farm house that the family rented just north of Highway 2 (Lake Shore Boulevard West) on Seventh Street.   By the time, she was three, the family with their six children, had moved south of Highway 2 to 93 Seventh Street, the ownership of which still remains with the family.

In the summer of 1927, the town of New Toronto hired Gus Ryder to be the lifeguard and swimming instructor at the town's “pool”, which had been marked off in Lake Ontario at the foot of Seventh Street.   It was that summer that Lou met Gus Ryder, whose influence would guide her throughout her life.  As her teacher and coach, through his example, she learned not only how to swim, but also the watch words of her life: personal commitment, community service and dedication to her sport.

In her six year career as a competitive swimmer, she broke records and chalked up ribbons and medals to prove her abilities.  Her pride and joy was her Mayor Jackson Trophy (named after New Toronto's mayor.)  In order to be able to keep the trophy, Lou had to win the mile race at New Toronto's waterfront three years in a row.  However, after her third victory swim, the town declined to mark it on the trophy because she would now be able to keep it!  It wasn't until 1996, when the trophy was to be placed in her Hall of Fame case, that the third marker was engraved for it by her son, John.  She said that it gave her "closure" to a feat well done in the past.

There were other swims that challenged during those 1930's summers:  the Canadian National Exhibition, Oshawa's waterfront, and Oates Pavilion that sponsored swims from the Etobicoke River into the Lake.  For one Exhibition swim, the water was so cold that when she finished the swim, her father took off his winter coat and wrapped her in it.  In the winters, training took place at Humberside Collegiate as there was no indoor pool in New Toronto.  Ryder would jam his swimmers into his old touring car every Thursday night for their trip to Toronto and their practice sessions.

I saw my Mom in a "competitive swim" once.  I was six; she was thirty.  My Dad and I sat on the west bank of the Credit River just north of the old Credit River Bridge on Lakeshore Road to watch.  Her pace was slow, while all the younger swimmers seem to be so far ahead.  My Dad told me not to worry - to watch how she was pacing herself; the others would soon burn out.  It was her style that had been her very own throughout her career - slow and steady.  She didn't win the swim that I watched, but placed well.  I don't drive over the new Credit River Bridge that I don't think of that day... memories of Mom. 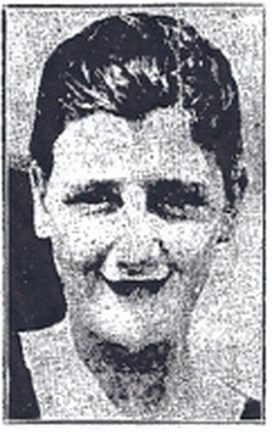 Lucille Wylie, champion junior girl swimmer of New Toronto, who won the junior girls’ mile swim at the Labour Day regatta of the New Toronto Swimming Club (Toronto Star – September 4, 1934)
Gus Ryder formed the Lakeshore Swim Club with the motto:  Everyone a Lifesaver.  Now it was time for the club to have a home and its own pool.  In the early 1950's, the town of New Toronto supplied the land for the pool and assured half of the $100,000 cost.  The Swim Club was to raise the other $50,000 to guarantee that the New Toronto War Memorial Pool would become a reality.  Lou and her husband, Ross Gamble, were part of the fundraising efforts.   They chaperoned a teen dance every Friday night at Seventh Street School, sold tickets on donated cars and bought ceremonial bricks for the building.  In 1952, the pool on Faustina Drive in New Toronto was opened.  When the City of Etobicoke took over the management of the pool years later, it was renamed the Gus Ryder Pool after the man whose vision was the driving force behind its construction.

Before the building of the pool, Lakeshore children learned to swim in the summer mornings’ program paid for by donations that Gus Ryder raised primarily from local industry, particularly from the Anaconda.  My Mother was one of the directors of the program, as well as a teacher.  Every morning she'd take me with her to meet: Long Branch children at Caulfield's Dairy at 31st Street; New Toronto children at the Brown's Building at 8th Street; and Mimico children at the Beach House at the foot of Mimico Avenue.  There they would line up on their day for a free streetcar ride to Sunnyside Pool (which, in the 1980's, was renamed Gus Ryder Sunnyside Pool.)   After the New Toronto War Memorial Pool was built, the same summer program continued, but now children came daily from all over the Lakeshore area.  This is the way that Mom spent her summers - teaching children to swim.  I always say that if you live in South Etobicoke, are of an age and know how to swim, Lou Gamble probably taught you. 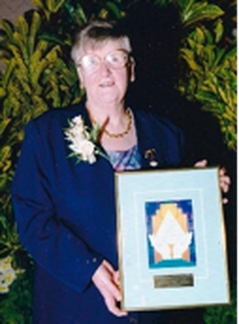 Lucille Gamble receiving Etobicoke Volunteer of the Year Award in 1993 (Gamble Family Photo)
Mom was ahead of her time as far as developing new swim techniques were concerned, particularly exercises in the water.   She was doing aqua fit with her Tuesday morning ladies' classes for years before aqua fit became a recognized water program.  I always said that she should have published a book of her water exercises which are now so commonplace.  In the early 1990's, I hurt my knee.  The doctor said that water therapy would help.  Well, Mom helped.  She devised a thorough exercise program that we worked on every day at the pool together.  Cliff Lumsdon acted as our lifeguard as we went through this healing program together... more memories of Mom.

The 50's marked the Swim Club's greatest honours from Marilyn Bell swimming Lake Ontario to Cliff Lumsdon's solo swim in frigid waters in front of the CNE.  Mom's greatest wish was to have been in a lake crossing boat, but that wish was never granted.  She watched Marilyn Bell touch shore, and she walked with Cliff as he swam alone over the 32 mile course at the Ex.  These people were her friends, her fellow swimmers who came to our house for visits, chats about "the swim" and dinners.  Every autumn there was a big dinner for the competitive swimmers in our home.  Mom virtually cooked for days.

Gus Ryder's programs for the handicapped were known throughout Canada.   Mom took over as Director of this Adaptive Program when Gus died in 1991.  Saturday mornings Mom and her volunteers provided a comprehensive program for children who came from all over the city.   Their Christmas party was the highlight of their swimming year.  Mom spent hours buying presents, wrapping them and working on the lunch menu that would be served that day.  She did this for Gus, she always said.   When the Lakeshore Swim Club became solely a competitive swimming club, my Mother at 80 had to retire.  It was a big decision on her behalf but the right one.  When her memory faded, she still remembered the requirements for Red Cross Swim badges, swimming out alone into unknown waters during new swim challenges, and the specifics of swimming that her coach had taught her.   Swimming was, indeed, her life.

Lucille Gamble was inducted into the Etobicoke Sports Hall of Fame in the second year of its existence - 1996.   She was recognized by the Government of Canada (1987), Swim Canada and Swim Ontario.  In 1993, she was Etobicoke Volunteer of the Year for her services to the community.  Older community members still will ask if I'm Lou Gamble's daughter. "Of course", I reply with great pride.