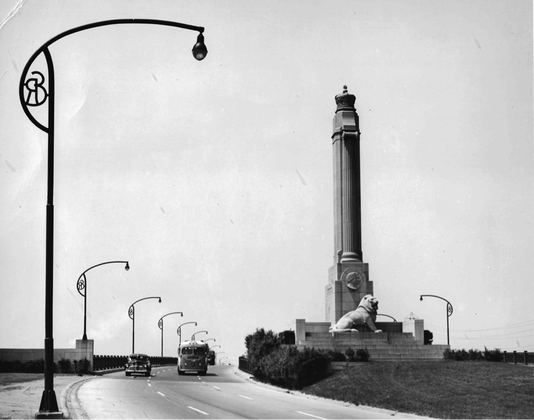 Toronto’s “Lucky Lion”, on the monument erected in 1939 to commemorate the opening of the Queen Elizabeth Way. Photo is looking west, .75 Km west of the Humber River. (Courtesy: Archives of Ontario)
Today, few Torontonians know that we have our very own “Lucky Lion.” It arrived on the monument seen above in 1939 to honour the new Queen Elizabeth Way (QEW), North America’s first real “super highway.” Children especially were captivated by the lion and looked for it as their parents drove by. Soon children and adults alike were greeting the lion for good luck. Originally located in Etobicoke, .75 Km west of the Humber River, this monument marked one terminus of the highway; the other end was the Rainbow Bridge in Niagara Falls. The highway was named for Queen Elizabeth, the Queen Consort of King George VI, and they officially opened the highway in St. Catharines on June 7, 1939.

The monument’s column was designed by architect W.L. Somerville. Toronto sculptor, Frances Loring, designed the lion for the base. Her fellow sculptor and life partner, Florence Wyle, modelled the crown on top and a relief portrait of the King and Queen.

The lion statue was the most challenging piece Loring ever completed. A stone carver was needed to implement her design in limestone, but all carvers she trusted were of German or Italian background, so none were considered acceptable during the war. Florence ended up with an English carver who resented taking direction from a woman. When he made an unauthorized change to her design, she fired him and did the carving herself. This work had to be done in situ on the QEW, exposed to November’s bitter winds. She hadn’t carved stone in 30 years, and had never used power tools before, but when finished, her sculpture was a triumph. Loring was clear that her lion was a symbol of Britain at the start of the war.  She precisely captured the tension in the lion as it rises defiantly from a reclining position to fight Germany. Her statue was praised as “the finest piece of architectural sculpture in the country.”

​For over 30 years, our Lucky Lion stood on the QEW median, until an expansion to 12 lanes was announced. The monument had to be removed, and demolition was a possibility. However a tremendous outpouring of public support led to it being moved in 1974 to the east side of the Humber River in Sir Casimir Gzowski Park. The monument is barely visible from the highway today, but the Lucky Lion that many of us remember from our childhoods has been preserved where we can touch its paw for luck.