Alexander La Rose was born in Montreal, Quebec. He moved to Ontario prior to 1812.  During the war of 1812, he served as a private in the 1st Regiment, Essex County Mariner Militia, under Capt. William Mills.  He was present at the battles of Brownstown, Maguaga & Detroit in Michigan in August 1812.  After the war, he settled in Lambton Mills, marrying Susannah Trimmer from Pennsylvania in 1817 at St. James Church in York.  They had two children Sapphira born in 1818 and Daniel in 1819.  In 1819, Alexander received a land grant at Lot 1, Conc. 2 in Chinguacousy Township, Peel County, for his military service.

Alexander La Rose died in 1820, and his widow, Susannah, married Peter La Rush, who raised Daniel and Sapphira as his step-children.  Daniel married Caroline Mills, born in England in 1821, at Central Methodist Church in Weston in 1842.  In 1845, they were living on the Chinguacousy property that Daniel had inherited from his father.  They sold it and purchased 100 acre Lot 17, Conc. B, which ran along the north side of Eglinton Avenue between Islington Avenue and Royal York Road.  They initially lived in a log house that was already on the property and, sometime between 1852 and 1860, built a new home for their growing family. 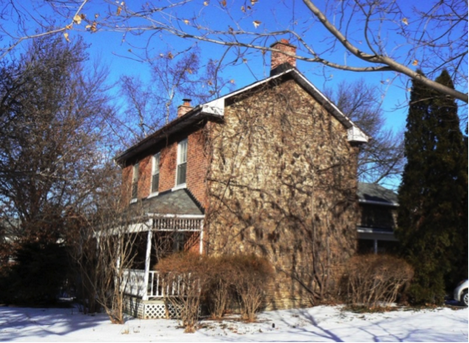 Recent photo of 322 Larose Avenue, the home of the La Rose Farm House, built 1852-60.
This home is a two storey red brick building in a three-bay Georgian style.  An open wooden verandah runs across the front of the house, which faces west.  The front door has four panels and is partially glazed, with a recessed transom. The double-hung windows have six panes in each sash.  The brick is laid in a Flemish bond pattern.  The house’s side walls and an addition at the rear are made of river stone, likely from the valley of Silver Creek which ran through the property on its way to the Humber River.  The log cabin was used as a drive shed for many years. Today’s LaRose Avenue follows the route of the original entrance drive off Islington Avenue.

Sometime after 1860, Daniel also purchased adjacent 100 acre lot 18 to the north. Still later, he acquired another 100 acre lot on the south side of Eglinton Avenue between Martin Grove and Highway 27. He also bought houses and mortgages in Weston and Toronto, making him quite a wealthy man in his time.

As they reached adulthood, each son was able to have his own farm: Charles farmed Lot 18; “Nin” had the farm at Eglinton and Highway 27; and Alexander lived on the home farm. Caroline died in 1876, and as the older daughters married and left home, youngest daughter Florence stayed to look after her father and the housekeeping. Daniel lived to be 90, passing away in 1908.  After his death, each son inherited the lot he had already been farming, and the girls shared in the Toronto houses and various monies and mortgages.

This beautifully restored and maintained home is listed on the City of Toronto’s Inventory of Heritage Properties.  It can best be viewed throughout the winter when there won’t be as much foliage blocking your view.