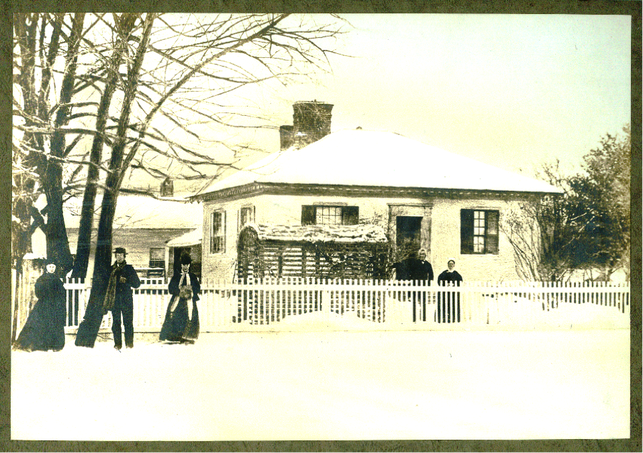 “Pine Lodge”, the Johnston Family’s 1816 homestead in Islington on the west side of Kipling Avenue, south of Burnhamthorpe Road (Source: Lucinda Bray)
This lovely winter scene is one of the oldest photographs of Etobicoke known to exist, taken about 1870.  Behind the fence stand the owners of this Kipling Avenue farm, Benjamin and Hannah (Mattice) Johnston, with three of their five children on the left.  The Johnstons hold a special place in the history of the Islington area as they were its first permanent settlers - and stayed for 177 years!

Benjamin was the youngest of the nine children of George and Mary Johnston, Late Loyalists who immigrated to Upper Canada from Pennsylvania in 1798.  When they first arrived in the Islington area around 1808, they leased a Clergy Reserve property and built a log cabin about where Dundas Street and Royalavon Crescent intersect today.  When the War of 1812 started, three of their sons - Thomas, Henry and William - served in the 3rd York Militia, and all three survived the war unscathed.   However, changes made to Dundas Street during the war moved its route north from where Bloor Street is today to right outside the front door of their cabin.  The family found the noise and dust caused by the constant movement of soldiers, horses, and supply wagons unbearable.

So, in 1815, George bought a 100 acre lot on the west side of Kipling Avenue, between Bloor Street and Burnhamthorpe Road.  By 1816, he had built the house you see in this photo near the north end of the lot, far from Dundas Street.  Constructed in the Regency cottage style popular at that time, the family named it “Pine Lodge”.

When George died in 1824, his eldest son Thomas inherited the property, but in 1832 Thomas sold it to his youngest brother, Benjamin. Eventually six generations of Johnstons would live on and farm this property, with the last piece sold out of the family in 1985.  Family members played key roles in the development of Islington Village. They were one of the founding families of Islington Methodist (now United) Church, and Benjamin’s son, James, was the church’s choir director for 50 years.  Five generations of Johnstons served as trustees for Islington’s School over a span of 119 years.

Around 1878, James had the Regency cottage demolished and built a new house of red brick in a Gothic Revival style on the same footprint.   This house still stands at 1078 Kipling Avenue, while three other Johnston family houses also survive at 1056 and 1100 Kipling Avenue and 66 Burnhamthorpe Road.  Three of them are listed on the City’s Inventory of Heritage Properties.   Mattice Avenue and Road, off Kipling Avenue, were named after Hannah Mattice Johnston’s family