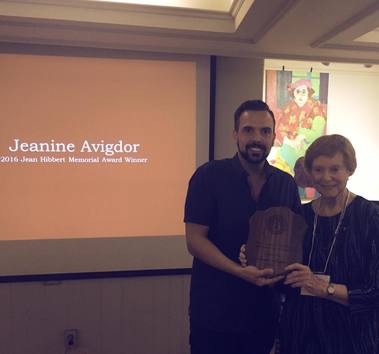 President James Geneau presents the 2016 Jean Hibbert Memorial Award to Jeanine Avigdor at the EHS AGM on September 22nd, 2016.
At the September 22nd Annual General Meeting, EHS presented Jeanine Avigdor with the 2016 Jean Hibbert Memorial Award. Jeanine has had a long-standing member relationship with the Etobicoke Historical Society. She was also an active board member with the York Pioneer and Historical Society.

A retired high school teacher, Jeanine is a direct descendent of William Reid of Scotland.  William and his peers were the founders/builders of Sharon Temple, the “Children of Peace”.  She continues to attend “Descendants Day” at the temple and was once a speaker at EHS about the tumultuous history of this landmark.

A long-time resident of Thorncrest Village, Jeanine is also a member of other historical and heritage groups.  She has donned historically accurate costumes to speak at the Alderwood Community Centre about Scadding Cabin, among other places.

Jeanine has spoken to several classrooms and youth organizations to not only educate, but inspire the next generation of history fans.  As a former schoolteacher, this came natural to her and her stories about Toronto history were always well-received by her audience.

Her strong interest and passion for preserving history and education continues today.

It is for these reasons, and many more accomplishments, that the Board of Directors of the Etobicoke Historical Society are please to have presented this year’s Jean Hibbert Memorial Award to Jeanine Avigdor.
More Recipients