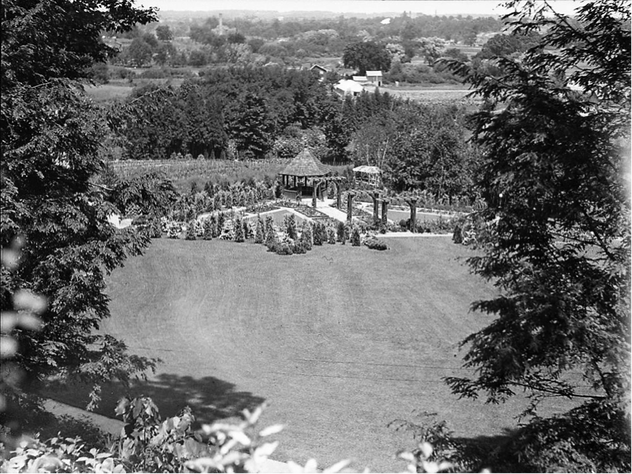 View of James Gardens in 1928 looking east from a lookout on Edgehill Road into the Humber River Valley. Courtesy: TORONTO ARCHIVES
We have Frederick Thomas James and his wife Margaret Rumney James to thank for Etobicoke’s beautiful James Gardens, which cover 8.5 hectares of hills, valley and forest beside the Humber River, south of Edenbridge Drive.

Frederick was a highly successful Toronto fish merchant. He purchased most of this land from his father-in-law, Thomas Rumney, in 1908. He added to it with purchases of adjoining land from developer Robert Home Smith. Frederick and Margaret first built a red-gabled cottage for family weekends. In 1927 they moved it to a new site in the southeast corner of the property. It was replaced by a large estate home made of stone quarried from the Humber River Valley. It too had “Red Gables,” giving the house its name. A three bay garage was also added.

Robert Home Smith gave Margaret the honour of naming the road to their home, and she selected Edgehill Road after her family’s former home in Liverpool. She also named Romney Road, a block west of Edgehill. Her maiden name “Rumney” had originally been “Romney”. She was proud of her ancestor, English portrait painter George Romney, noted for his 24 engaging portraits of Lady Emma Hamilton, mistress of Lord Nelson.

The James family transformed the land in the valley below their house into a gardener’s masterpiece. Much of the area had been swampy, but it was changed into Frederick’s ideal of perfection with picturesque gardens, waterfalls, terraces, lawns, nature trails, ponds and rockeries. Believing that the gardens should be shared beyond their family, a sign on a brown gate invited other garden lovers to enter any time except Sunday.

Frederick died in 1949 and Margaret in 1954. The property had to be sold to settle the estate. A deal was struck for Metro Toronto to purchase the property for $150,000 in 1955. The deal almost fell through because the recently-formed Metro Toronto Parks Department was not yet equipped to take on this large area. After a private solution fell through, Etobicoke Township agreed to manage the park for $1.00 a year until Metro could take it on, which occurred in 1962.

Today the gardens are open daily. Thousands of flowers, including over 75,000 tulips, are planted annually. Designs and materials are changed annually in the rock gardens and under the well-pruned trees and shrubs. Part of the James’ house is now a community centre offering specialized preschool, arts and fitness programs, as well as a unique summer camp combining fine arts, ecology and athletics.