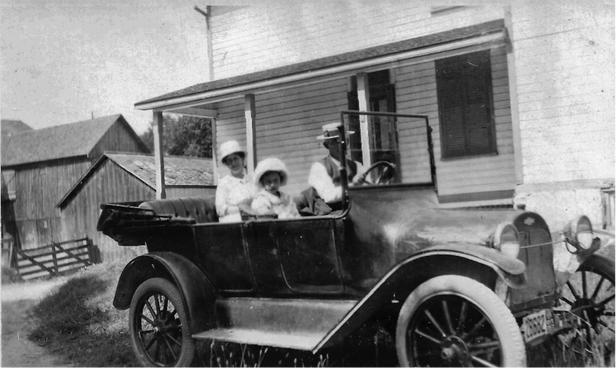 The Appleby family in their first car, a brand new Chevrolet, in 1917. L to R: Annie, Mary and William Appleby. Montgomery’s Inn/Photo
In my last column, we learned about the Musson Family who saw Canada become a nation in 1867. This week, we will see Islington enter the 20th century machine era. Transportation by train, bus and car grew exponentially. Islington got its first three telephones in 1903 and by 1910 there were 36 subscribers. Many installed  electricity in their homes and Islington’s first street light lit up the corner of Dundas and Cordova in 1908. Etobicoke’s first high school opened on Montgomery Road in 1928. There was now more variety in the goods available for sale locally.

The Appleby family immigrated to Canada from Yorkshire in the early 1800s, settling in the Lakeshore area of Etobicoke. Around 1890, John Appleby, grandson of the original settlers, bought the entire east half of the farm that Edward Musson once owned. John and his wife Mary had one son, William, and four daughters: Lilly, Elsie, Alice and Mabel. They lived in a farmhouse on the northwest corner of Islington and Dundas. John retired in 1900 and moved to Lambton Mills, leaving the Islington farm to William. William married Annie Cudney in 1905 and their daughter, Mary Alice, was born in 1909.

In 1913, William optioned all but the six acres surrounding the house to a proposed Islington Golf Course, but the sale was delayed by World War I. Annie died in the 1918 flu epidemic. In 1920, William remarried one of his wife’s cousins, Florence Waterworth, and they moved, with daughter Mary, into a new house William built further west at 4872 Dundas. He installed the latest modern conveniences: hot air furnace, indoor bathroom, kitchen plumbing and an electric water pump. This house still exists, as does a double store William built at 4866/4868 Dundas. The east half became the first location of Kirkby’s Hardware, a village mainstay for 83 years.

William was a much-loved figure in Islington. He was a councillor from 1919 to 1923, and also served as relief officer. In this latter capacity, he often gave away his own family’s clothes or bedding to people who were destitute. He passed away in 1924, leaving Mary an orphan at 15, to be raised by her many loving aunts and grandparents.

Mary attended the University of Toronto and became a lawyer. She lived and practiced real estate law in the house on Dundas until retiring in 1954. Mary sold the six acres at the corner of Dundas and Islington to a developer. The Riverbank subdivision was erected on the site, with Mary picking one lot for herself at 6 Babington Court where she lived until 1999. After a fall, she moved to a senior’s residence near relatives in Haliburton, and passed away there in 2003 at the age of 93.

Mary was an avid local historian and much of what we know about early Islington is thanks to Mary’s efforts in researching and recording Islington’s past.