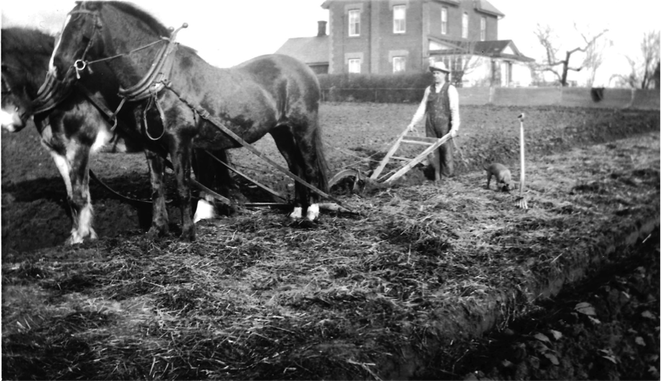 Timothy Johnson ploughing his 4 hectare market garden with horses Bob and Bill on east side of Prince Edward Drive South, near Glenellen Drive ca. 1910. The family home can be seen in the background. Courtesy: MONTGOMERY’S INN
In 1885, widower James Johnson and his five children emigrated from the Isle of Man to Canada. They settled in an area of Etobicoke soon to be called “Sunnylea” where they joined other market gardeners who were finding success on small plots of land.

James’ second son, sixteen year old Timothy, managed the family’s gardening business from the beginning, renting land near Bloor and Prince Edward. In 1897 they were able to buy an existing four hectare market garden with a large barn and a two-storey brick house on the east side of Prince Edward Dr. S. at today’s Glenellen Dr. They were soon growing a full range of vegetables and tree fruits.
In 1898, Tim married Lillie Mason, whose family farmed the northeast corner of Bloor and Prince Edward. Their first child, Murray, was born in 1902 and three daughters followed: Marguerite, Helen and Isabel.

Tim had a variety of interests that enlivened life for young and old in the neighbourhood. He loved flowers and planted 320 metres of cosmos and petunias along his driveway and road frontage. He built a swimming pool out of riverstone and cement for the children, followed by a miniature railway 90 metres in length and powered by the kids themselves. He flew his beloved Union Jack on a 20 metre flag pole that could be seen for miles.

Murray became an architect and, after practicing this profession for a few years, followed a regimen of gardening eight months of the year, and drawing house plans for several different architectural firms in the other four months. In 1935 he married Mae Jackson and they had three children. When things were tough during the Depression, Murray visited Loblaws’ head office to pitch their produce, but came home with no commitment from them. However, within a few days, he received his first Loblaws order, the beginning of a relationship that lasted 30 years.

In 1948 Tim retired from farming and subdivided most of his property. Two new streets were created: Glenellen Drive and Kirk Bradden Road (the latter named after the Isle of Man church where Tim was christened.) His own house was altered but left in place as 19 Kingslea Court. Tim died in 1951 and Lillie in 1973, and they were buried in St George’s Anglican Church cemetery. In 1952, Murray began a third career in local politics. Starting as chair of the Etobicoke Board of Education, he went on to serve as councillor, deputy reeve and Board of Control member.