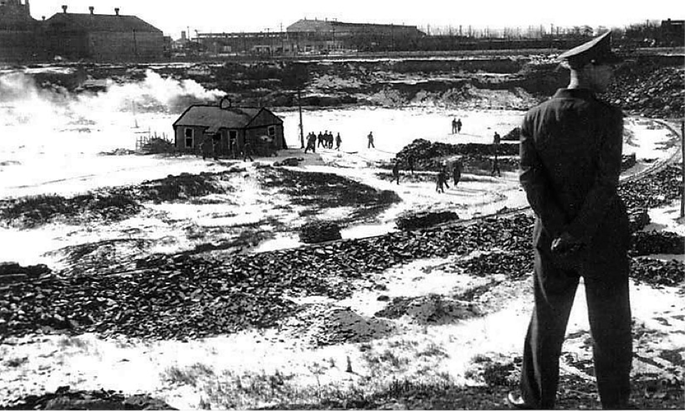 A guard overlooks the Ontario Brick and Tile Company’s shale pit at the Ontario Reformatory - Mimico in 1950. Courtesy: MONTGOMERY’S INN
Mimico Correctional Centre started out in 1913 as the Ontario Reformatory – Mimico. This was a time when prisons were starting to be seen more as places of reform than of punishment. To achieve this, new prisons were being built to provide work for inmates, often outdoors, in a pleasant environment and, for some inmates, housing with no surrounding fences.

The Ontario Government discovered a shale deposit on 80 hectares of land they owned on the east side of Kipling Avenue, between Evans and Horner Avenues. The province established the Toronto Brick Company (renamed Ontario Brick and Tile Company by 1920) and taught the inmates a range of skills: extracting shale from the ground, manufacturing bricks and tiles, packaging goods and transporting to the rail siding, and even building their own dormitories.

There was also enough land with good soil to establish a working farm. This operation included fields for hay, oats, vegetables, pasture and orchard; buildings such as barns, silos, hen houses, root cellars and hog pens; and educational programs on planting, tending and harvesting.

During World War II, the site was turned into a prisoner of war camp called Camp 22. Most inmates were merchant seamen captured by Allied troops. Of the 23 POW camps in Canada, this was one of the few near a big city and residential neighbourhoods. In 1968, the facility was renamed the Mimico Correctional Centre. That year, inmates produced 275,000 bricks and 12 tonnes of tile. Other inmate workshops produced 4,829 slippers, 662 picnic tables, and 449 rolls of snow fence. However, the Ontario Brick and Tile Company was closed the next year as a result of pressure from labour unions who believed the plant was taking work from their members.

Mimico Correctional Centre closed in 1975, but gradually reopened during the 1980s, reclassified from minimum to medium security. In 1994, it opened to house maximum security inmates as well.

Mimico Correctional Centre closed permanently in 2011. It was replaced by the Toronto South Detention Centre at 160 Horner Avenue, the second largest jail in Canada (after the Edmonton Remand Centre.) This new facility opened in 2014, replacing the Toronto Don Jail, the Toronto West Detention Centre, and the demolished Mimico Correctional Centre. It consists of a maximum security building housing up to 1,650 accused offenders awaiting trial, and a medium security building called the Toronto Intermittent Centre, housing up to 320 inmates serving their sentences in installments.

I think we’ve moved a long way from that 1913 prison ideal of outdoor work, in a pleasant environment, with no fences!