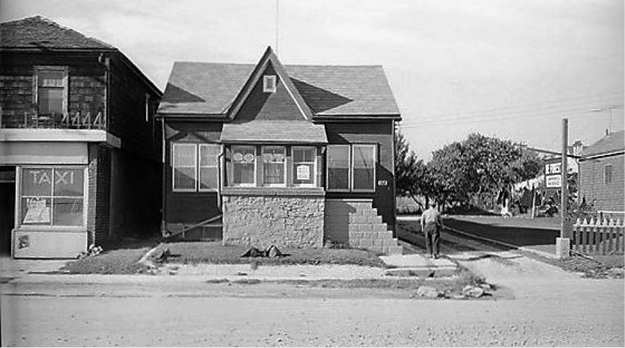 Humber Bay’s last surviving “Davidson Cottage” in 1957. Courtesy: TORONTO ARCHIVES
A lumber baron. The American Civil War. An artists’ colony. Pre-fabricated houses. Those phrases may not immediately conjure up the Humber Bay neighbourhood, but they do describe some unique aspects of that area’s history.

The story starts with Joseph Davidson.  He was born on a farm in Halton County in 1829, but soon became a major figure in Ontario’s lucrative lumber industry.  In 1866, Davidson moved to Toronto and set up a lumber yard near Queen and Toronto Streets. During the 1870s, he was processing over a million meters of lumber annually at this location. He bought large tracts of pine forest across Ontario and built saw mills to turn his timber into lumber, railway ties, or whatever his customers wanted. Some examples include building the first saw and planing mills in Thunder Bay, and supplying railway ties for the Canadian Pacific Railway when it opened across Canada.
He also bought land in the Humber Bay area of Etobicoke, a short distance west of the Humber River, between Lake Ontario and The Queensway.  Because the railway crossed his property, he had access to transportation for his timber both by ship and by rail.

Davison exported lumber to the United States, but during the Civil War and for years after, the U.S put restrictions on cash sent out of their country. Davison agreed to accept payment in the form of 40 pre-fabricated houses made in the U.S. with his lumber and shipped on barges across Lake Ontario to Humber Bay. These were likely the first pre-fab homes in Canada. Davison bought more land in Humber Bay to place these houses and offered them for sale. A “Davidson House” on High Street became Humber Bay’s first school in 1888. Another held the first services of Humber Bay’s St. James Anglican Church.

Several houses, without basements or water, were put up on a hilly, curving street called Davidson Crescent which ran south from The Queensway, opposite today’s Humber Treatment Plant. This street attracted artists, actors, musicians and writers who painted their homes in bright colours and surrounded them with flowers. It gave the street a “Bohemian” flair, although as the Depression and railway soot took their toll, many began to call the street a slum. Davidson Crescent and its houses were demolished when the Queen Elizabeth Way was built. The photo above shows the only one of Davidson’s pre-fab houses that still stands today, now covered in white siding.  Located at 140 The Queensway, it’s a reminder of this unique chapter in Humber Bay’s history.