In Its Prime, Claireville Was an Agricultural Centre 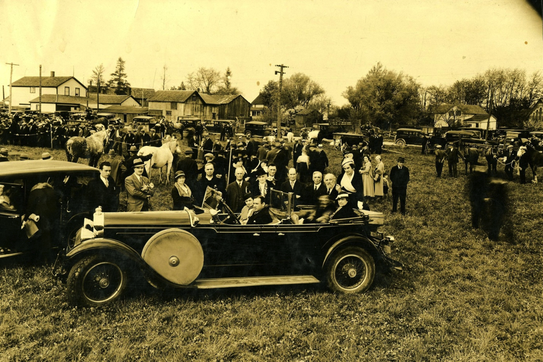 Judging horses at the Claireville Agricultural Fair in 1933 (Courtesy: Peel Region Archives)
For many of us, the advent of autumn means it’s agricultural fair season – a tradition as old as recorded history. Once up to 500 fairs were held annually in this province, and over 200 still take place today. These glimpses into rural life, with its livestock, crops, ploughs, and baking competitions, help reassure us that some semblance of our historic agricultural past still exists.

​Claireville village is in the very northwest corner of Etobicoke. Its founder was Jean du Petitpoint de la Haye, French Master at Upper Canada College, who filed a plan for a village along Albion Road in 1851, naming it after his daughter, Claire. The village was a service centre for the surrounding agricultural area and its citizens held their first agricultural fair in 1865.

In this photo, we’re looking northeast across Indian Line where you can see a row of parked cars. The buildings are all on the south side of Albion Road. The white building at the far left is the town’s general store, built ca. 1840 and the location of the first post office in 1842. The other buildings are residences, some with small barns behind.

Front and centre in the photo is a 1931 Packard, owned by William Perkins Bull who is at the rear of the car with white hair and beard. Bull was a wealthy lawyer, financier, philanthropist and ardent historian who wrote 13 books on the history of Toronto, Peel, and other parts of Ontario. His wife Marie is seated in the car’s back seat, and his son, William Perkins Bull Jr., is in the driver’s seat.

The Claireville fair was held every year until 1959. By then, the village’s role as an agricultural centre was diminishing as farms were being replaced with industry and subdivisions. When Highways 427 and 407 were built in the 1980s-90s, many buildings, including the general store, were demolished and several streets were closed. The route of Albion Road was changed to by-pass the village on the south, and the name of the village’s main street was changed from Albion Road to Codlin Crescent. Only 14 former residences remain on what was once the main street of Claireville. A few are empty and the rest have been repurposed as businesses for truck storage, truck driver training, a welding school, and religious purposes. Like a ghost town, Claireville today bears only a shadowy resemblance to its former agricultural roots.