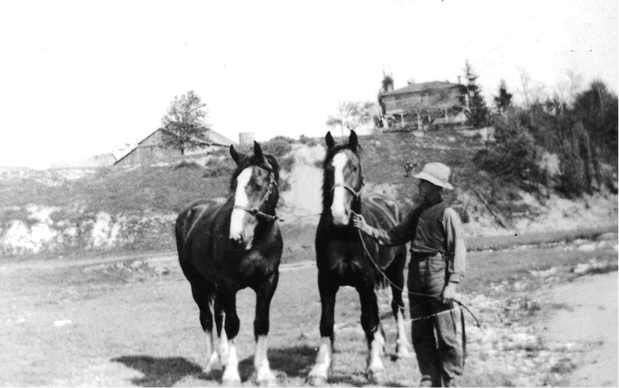 In 1919, Herbert Ackrow was caught on film watering his nicely matched pair of work horses in the West Humber River which ran through his farm, located on the west side of Highway 27, north of Rexdale Boulevard. Herbert lived in the house on the hill to the right, likely built in the 1820s by a builder named Matthew Priestman for his own family. The large barn complex to the left consisted of several buildings in a U-shape. By 1968, the property had been sold to Humber College, which opened its equestrian program in the Ackrow barns in 1973. The house and barns were demolished by 1985, and today this beautiful river valley is all parkland with hiking trails leading to the Humber Arboretum. (Courtesy: Montgomery’s Inn)