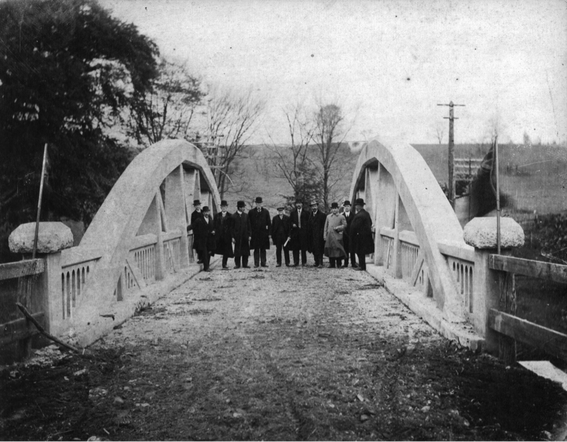 Middle Road Bridge over Etobicoke Creek, built 1909 by Octavius Laing Hicks (second from left) Courtesy: John Weston Hicks
When Octavius Laing Hicks of Humber Bay died in 1930, he was honoured in an obituary in the Contract Record and Engineering Review as “the most active and widely known bridge contractor... around Toronto.” But this was just one of his many talents.

Scottish-born Hicks settled in Humber Bay in 1873 where he purchased the Royal Oak Inn on Lakeshore Road west of the Humber River. He built boats just west of his Inn, specializing in fine yachts and small pleasure craft. In 1880, he patented a sliding seat for racing sculls similar to one used by his friend Ned Hanlan in some of his races. Hicks also founded a boat livery business on the Humber near its mouth, owned a commercial fishing fleet, and ran a brick yard on The Queensway. He and two other local hoteliers formed the Humber Steam Ferry Company and their boat, Annie Craig, made four trips daily in summer to bring guests from Toronto to their hotels. In High Park, he invented a water merry-go-round called The Flotilla, later moved to the CNE.

But Hicks is most lauded for his skill in building bridges. He lived in a time of great change in bridge technology, and he built the first one of nearly every new class of bridge. In 1905, his first commission was Musson’s Bridge on Albion Road over the Humber River, the first all-riveted steel bridge with a permanent floor. In Unionville in 1907, he built the first concrete through-beam bridge, followed in 1908 by the first concrete arch bridge in Canada over the Humber River on Scarlett Road. He then built new abutments for an electric railway over Mimico Creek using a new method he invented. This method was so successful that he was commissioned to build “sea walls” to stop shore erosion along Lake Ontario across Etobicoke.

Above all, Hicks is remembered as the 1909 contractor for the Middle Road Bridge over Etobicoke Creek, using concrete trusses instead of steel wound members for the first time in Canada. This is the only Hicks bridge that survives today. Protected by a heritage designation,  it is jointly owned by Toronto and Mississauga. You can find the bridge at the west end of Sherway Drive, which runs west off The West Mall, just north of Evans Avenue.
​
Twice widowed, Hicks passed away in 1930, leaving an estate of $47,000 to his four sons and one daughter. He is buried in Christ Church Mimico Cemetery on Royal York Road.