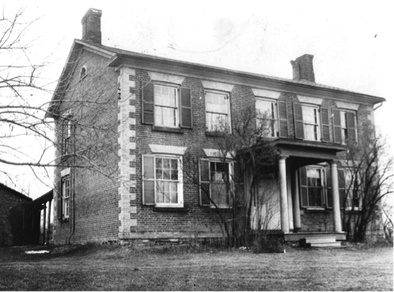 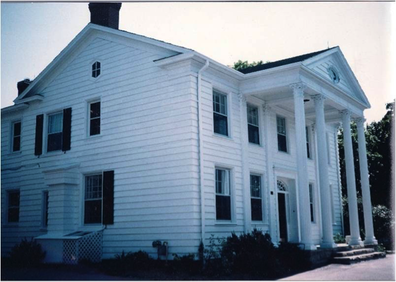 Andrew Coulter House built pre-1852: top photo taken in 1929; bottom photo taken in 1980s. (Courtesy: Etobicoke Historical Society)
The house at 59 Beaver Bend Crescent in the West Deane Park area of Etobicoke has a secret! It looks like a Classical Revival mansion from the outside, but hidden inside is a red and yellow brick Georgian house built sometime prior to 1852.

Andrew and Martha Coulter emigrated from Northern Ireland and bought a 100 acre lot in Etobicoke in 1822. Accompanying them were their first two children, and they would have seven more children in Etobicoke. Their property lay between Highway 27 and Martin Grove Road, halfway between Rathburn and Eglinton, in an area known as Richview. In addition to farming, Andrew built a saw mill on Mimico Creek which ran through his property. As the family prospered, they bought 150 more acres of land. By 1852 they had built an elegant 11-room, 5-bay Georgian house of red brick with yellow brick quoins and lintels.  All interior partitions were made of brick as well. After Andrew died in 1857, four of his sons operated different sections of the farm. Eldest son Robert’s house also still stands at 112 Ravenscrest Drive. Many Coulters family members are buried in Richview Methodist Church Cemetery, which now sits in the middle of the Highway 427/401 interchange.

The property was sold out of the Coulter family in the 1880s. In 1939, construction magnate Percy F. Law bought the west 50 acres, including the house, for $16,000. Law covered the brick with white clapboard siding (now yellow vinyl) and added a two-storey classical portico on the front, with four Corinthian columns supporting a large pediment. The front door is surrounded by sidelights and a “spiderweb” fanlight.

Law called his property Elmbrook Farm and raised prize-winning shorthorn cattle and racing horses. In 1956, he sold the property on either side of the house and Edmund Peachey developed it into the West Deane Park subdivision. The house and 11 acres around it were kept by the Law family until 1981 and then sold to Mason Homes. Most of the 11 acres were developed, but this beautiful house with its secret interior remains in private hands, occupied today by the Neurological Rehabilitation Institute of Ontario. It is protected by a listing on Toronto’s Inventory of Heritage Properties.