Highfield was a post office village at the intersection of what is now Rexdale Boulevard and Highway 27, according to the map of Etobicoke in the 1878 York County Atlas. On the southwest corner was Highfield Post Office which opened July 1, 1866, and closed November 12, 1913. On the southeast corner was the one room red brick school which was used from 1874 to 1954.  One concession to the east on Rexdale Boulevard at Martin Grove Road was the original Highfield School on the southeast corner and Robert Mercer's Mono Inn on the southwest corner.  There was no group of homes or other buildings at either intersection.  At one time H. Dutchburn was postmaster and shoemaker; at another time a Mr Kay was postmaster and blacksmith. Mrs C. Preston was the milliner, and Thomas Stonehouse the tailor.  James Gardhouse was a farmer who imported horses, cattle, Cotswold sheep and Berkshire pigs.

Rexdale Boulevard was originally know as McVean's Sideroad.  After Alex McVean's wife died he came to Canada with 4 sons, 1 daughter, 2 servants, 1 broad mare "Mag", and surveying instruments, and settled in Toronto Gore Township northwest of Etobicoke. Son John McVean and Elisha Lawrence formed a partnership to build roads including what is now Rexdale Boulevard. This sideroad was supposed to cross Highway 27 and the other north-south concession roads at right angles. Because of the meandering west branch of the Humber River and the desire of Malton people wanting to get to Weston mills and shops, McVean's sideroad was built south of the river.  It was duly opened with proper ceremony in November 1833. For years it was known as the Old Malton Road.  (The New Malton Road was the name given to one of the original sideroads which we now call Dixon Road.)

The original log Highfield School was on a small 1,518 square foot site donated in 1845 by Joseph and Mary Smith to the Home District Council for a common school. William Lloyd was teacher in 1847 and he received that portion of money allotted to School Section #6 from the Common School Fund, plus 3 shillings 9 pence per quarter for each child in attendance. Each child was to bring 1/4 cord of wood for the stove. Occasionally the trustees listed specific children for whom no amount was to be collected.

In 1858 it was moved by R. Wood and seconded by William Smith that "this school be free during the year". The trustees were among the first to abolish school fees, favouring a policy in which education costs were raised through taxation of all landowners. 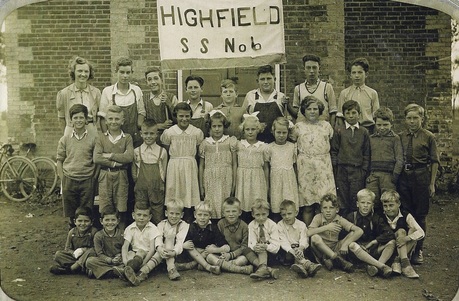 The site was donated by Thomas Smyth and is now occupied by the Metro Work's Waste Transfer Station on the northwest corner of Carlingview Drive and Disco Road.  Smyth was a widower who came to Etobicoke in 1833 with 6 sons and 3 daughters and began farming between Carlingview and the Indian Line Road which was Etobicoke's western boundary.  About 1845 Smyth opened the Claireville Hotel on the west side of the Indian Line just south of what is now Steeles Avenue. Toronto Gore Township council met there on occasion.  After 20 years he retired to his farm and son Patrick ran the hotel.

Little is know about the Catholic School.  Its entrance door swung on leather hinges while its latch string passed through a knot-hole and hung outside, to be pulled to open the door.  The school was of logs, about 14 feet square. Inside were two long desks, boys sitting to the left of the schoolmaster and the girls to the right.  A notice appeared in the Toronto Mirror of July 18, 1856: "Teacher wanted for Catholic Separate School No 6 in the Township of Etobicoke.  A liberal salary will be given. Apply to the trustees Col. Baldwin, Thomas Smyth and Alex Gracey.  Richview Post Office, June 4, 1856."  There were no records of the school after 1872.

In 1874 trustees Thomas Taylor, Thomas Brown and Matthew Smith of the old school on Rexdale Boulevard at Martin Grove decided to build a new brick school on Rexdale at Highway 27, which was closer to the closed Catholic school. The new site was purchased from James Gardhouse.  The large one-room school was built at a cost of $1,789 using 31,000 red bricks at $6.75 per thousand and 1,300 white bricks at $10.00 per thousand.  The school was closed in 1954 and pupils from the area transferred to Thistletown School on Albion Road east of Islington Avenue.  Highfield School was demolished a few years later when Highway 27 was widened.

The present Highfield School is on Mount Olive Drive north of Albion Road between Martin Grove and Kipling...it has the 1874 cornerstone in its lobby, but it is a long way from the old School Section #6.

Although Highfield did not have a Catholic Church there were two other churches in School Section #6.  At the east end of Rexdale Boulevard, almost to Kipling, on the south side was Willow Grove Baptist Cemetery where Pastors William Millard and James Brooks were buried. The site was donated by George Betteridge who didn't quite realize where McVean was placing the road. The congregation worshipped on the north side of the road, perhaps in the big room above the stables across from the Mono Inn.

Near the west end of Rexdale Boulevard on the north side is Sharon Unitied Church Cemetery where memorial services are still held.  Their congregation's records date back to 1842. William and Ann Hainstock moved to Etobicoke about 1838 and they opened their home for services by itinerant Primitive Methodist pastors.  Richard and Margaret Thomas gave the site for what became Hainstock's log chapel in 1845. It had no musical instrument so John Gardhouse was "precentor" or tune starter.  On June 9, 1856, Thomas Fenney was instructed at a meeting to get a "burning fluid" lamp, presumably for the brick church which had a stone inscribed "Primitive Methodist Chapel 1856."  To the west of the church and cemetery was the well-known Rosedale Farm of the Gardhouse family.

In 1928 the West Toronto Kiwanis Club purchased 10 acres on the West Branch of the Humber from James Martin Gardhouse for Camp Westowanis, a holiday spot for underprivileged boys in the Keele-Royce area.  Girls from the Carmelite Sisters' Orphanage spent periods there, too.  To raise funds the Kiwanis Club built and raffled off a model home on Strath Avenue in Kingsway Park.  After 21 years the Westowanis Camp amalgamated with another Kiwanis camp in Muskoka, and sold the Etobicoke site with all its buildings to the Polonia Sports Club of St. Stanislaus Polish Parish in downtown Toronto.

Frank M. Deakin purchased the old Gardhouse farm for Raymond Louis Powers of the Christian Brothers and renamed it Janet Farms.  The farm was transferred to the Roman Catholic Episcopal Corporation in January 1956, but they found getting Etobicoke water and sewer services too costly to proceed with their plans.