Goodyear Tire Was a Major Employer in New Toronto 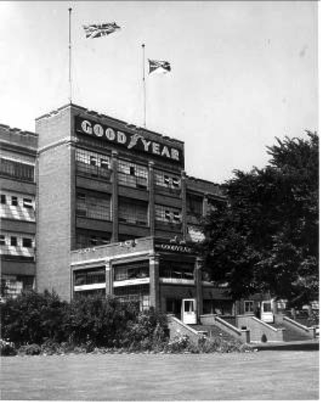 Goodyear Tire and Rubber Company in New Toronto in 1967 (Courtesy Goodyear Canada Inc.)
New Toronto, a one square mile community on Lake Ontario between Dwight Avenue and 22nd Street, once had the highest value of manufacturing per square mile in North America. Initially part of the Township of Etobicoke, the area’s growth started slowly after a plan of subdivision was filed in 1890. Over the next few decades, with good railway access, a streetcar service along Lake Shore Blvd. W., the paving of Highway 2 by 1917, and the availability of low cost housing for employees, the community was well on its way to being a remarkable manufacturing success. In 1913, New Toronto was incorporated as a village, and in 1923 it became a town of 5000 residents.

The Goodyear Tire and Rubber Company decided to locate its rapidly expanding Canadian tire division in New Toronto and in 1917 built a factory on a 23 acre site on the north side of Lake Shore Blvd. W., between Ninth and Fourteenth Streets. New Toronto’s council encouraged Goodyear to choose that site by promising an unlimited water supply. The new plant made tires for cars, trucks, logging and farm vehicles and industry. By 1927, they were manufacturing 50% of all automobile tires in Canada.

Goodyear typically had three shifts and 1300 employees, although this increased to 2800 during World War II. The company was known as a supportive employer and good corporate citizen. The plant had its own cafeteria, bowling alleys, police, internal newspaper and baseball team. Forty seven Goodyear employees were killed in World War II and Goodyear donated a camp to the Boy Scouts in their memory. Employees were encouraged to participate in community events and were recognized by Goodyear with “Spirit Awards”.

In the 1980s, Goodyear ran into financial difficulty after a threatened hostile takeover and they decided to close the New Toronto site because it had the lowest productivity level. The community was devastated when the plant closed on May 31, 1987. In 1988, Daniels Group acquired the property. The vacant Goodyear plant was demolished, and a seven-building apartment complex called Lakeshore Village now fills the site.

Sadly, over time, many of New Toronto’s industries have met the same fate as Goodyear, resulting in many changes within the community as people adapted to this major shift in employment availability.