In 1874, Daniel and Elizabeth Horner of Toronto purchased three 100 acre lots from Archibald Cameron. The property ran north 5/8 mile from today’s Horner Avenue, and east 3/4 mile from Brown’s Line. There was a house on the property built c. 1850 which Daniel enlarged and called Ashfield. This house later bore the address 185 Beta Street. The Horners had one son, Franklin, and six daughters. 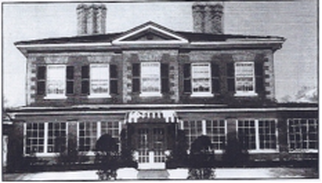 The Horner home, Ashfield, at 185 Beta Street. Centre main section replaced in 1960s. Entire structure demolished in 2009. Source: Etobicoke Press
Daniel and Franklin operated a paving and construction company, and were very active in community and municipal affairs.  Daniel served on Etobicoke Township’s council in 1881-4 and 1886. Franklin was a school trustee for over 20 years.  Over six feet tall and very athletic, Franklin played cricket and was a member of the Night Hawks Lacrosse Club of Mimico.

When Daniel died in 1910 at age 75, he left 100 acres and the house to Franklin, and the remaining 200 acres were shared among his six daughters.  Franklin’s two children, Goldwin and Pearl, continued the family business when Franklin died in 1941 at age 77.  Goldwin passed away two years later.  Pearl operated the business and lived in the house until she sold it 1960.

By 1889, a school was needed for the expanding Alderwood population.  School Section 12 was created and its three trustees purchased a one acre site on the south side of Horner Avenue from Richard Newborn for $750 and built a one-room red brick school.

However, in 1910, the Ontario and Quebec Railway (later the CPR) decided to build a spur line through the school property to connect the Islington area with the Grand Trunk’s lake shore line.  SS 12’s three trustees – Franklin Horner, William O’Connor and a third individual – negotiated with the railway, eventually obtaining their agreement to build the community a new school on a new site purchased from the Horners on the north side of Horner Avenue, between today’s Beta and Gamma Streets.  The railway also paid them an additional $150 for the inconvenience.

This new one-room brick school was the beginning of Franklin Horner Public School.  It was designed by architect E.J. Lennox (who also designed Toronto’s Old City Hall and Casa Loma) and built by McKessock Construction.  The school had all of the latest innovations: large wall-mounted slate blackboards; many large windows to let in light; individual wooden desks; and a modern coal-burning stove.

By 1926, this school was overflowing and classes were also being held in the neighbouring Anglican Church of the Atonement.  Four classrooms were added and the school name was changed to Franklin Horner Public School (one of the few public buildings named for a living local resident.)  By 1947, the school was overcrowded again and a petition by local residents to enlarge the school had been denied.  Residents were told that many children would be sent to school in Long Branch.  Eventually the decision was reversed and the school was expanded into the structure you see today. 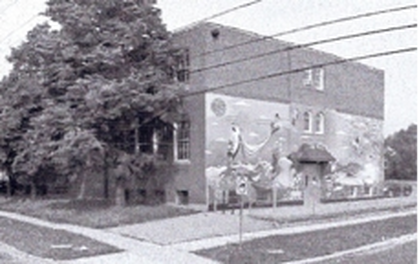 Franklin Horner Community Centre (and former Public School) today. Source: Google Street View
In 1984, the school was closed because of low enrolment, but the community quickly mounted a grassroots campaign to save the building by using it as a much-needed community centre. Don Law led the charge by forming a central committee of about 10 community residents, assisted by dozens of others.  They met with the local councillor, conducted surveys, gathered signatures on petitions, recruited groups and individuals to fill the centre and run programs, and gave multiple presentations to Etobicoke’s council.


After thousands of volunteer hours, this community effort was successful. The City of Etobicoke leased the building from the Toronto District School Board and reopened it on October 1, 1986 as Franklin Horner Community Centre.  The building was subsequently purchased by the City of Toronto, and is listed on the City’s Inventory of Heritage Properties.  Don Law recently passed away in his 90s after remaining actively involved in the operation of centre throughout the past 24 years.
Today, this Community Centre is a vital part of the Alderwood community, with over 1200 individual members and 52 groups that provide a wide range of activities and support services.