The Ontario Ministry of Labour is responsible for employment equity, occupational health and safety, and labour relations. The year 2018 marked their 100 years of protection for Ontario's workers. With the growth of manufacturing, unsafe working conditions were creating a public issue. Sir William Meredith, Chief Justice of Ontario, was appointed in charge of a Royal Commission to recommend ways to support injured workers. Meredith’s recommendations became law. To all who have worked to protect Meredith's principles for 100 years, Ontarians owe a debt of thanks. In honour of the ministry’s anniversary, Belinda Sutton, Senior Communications Officer with the Ministry of Labour, unearthed stories of two Mimico residents who played interesting roles in the early days of this Ministry.
Marilyn McGimpsey can still picture her famous grandfather, Dr. Forbes Godfrey, decked out in a darkish grey suit and dove grey spats. “I particularly noticed the spats because my father didn’t wear such distinguished apparel,” Mrs. McGimpsey says in an interview at her home in Bangor, a seaside resort town in Northern Ireland.

That memory dates to the early 1930s when Mrs. McGimpsey, now 90, was just a few years old and living in Mimico. She says her grandfather had recently left politics after serving as Ontario’s second Labour Minister and first Health Minister. He died soon after, in 1932. He was just 64.

Other memories include visiting her grandfather early some mornings at his Mimico home at 49 Stanley Avenue near Ontario’s waterfront, now the site of a low-rise apartment building. She would sit in her child-size Windsor rocking chair beside the fire. “Sometimes I would tap on his adjoining bedroom wall,” she says. “If he tapped back, I would go downstairs and bring back some of last night’s chocolate cake or other unsuitable breakfast food. He always agreed that it was a good idea but, of course, he only pretended to eat!”

Although Mrs. McGimpsey and her husband, Hal, settled in Ireland in 1952, she remains proud of her Canadian roots and her dapper grandfather. He was born in York Township in 1867, grew up in Owen Sound, then attended the University of Toronto. There he received the Cody Silver Medal for second highest academic achievement for fourth year students in the “Doctor of Medicine Programme”. The medal has passed down to Dr. Elizabeth McGimpsey, Dr. Godfrey’s great great granddaughter and only direct relative to also become a medical doctor. Dr. Godfrey went on to Glasgow and Edinburgh for post-graduate work, then began practicing in Mimico in Toronto’s west end. “He soon became known as a skillful, conscientious and energetic family doctor,” according to The Mimico Story, a book by Harvey Overton Currell. 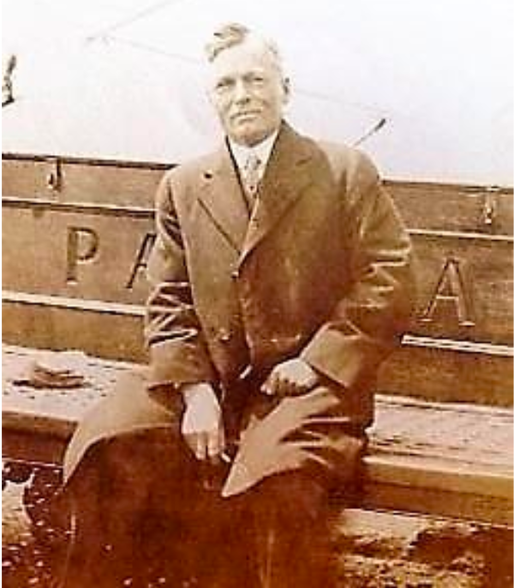 Labour Minister and Doctor Forbes Elliott Godfrey.
Dr. Godfrey was also known to take out a horse-drawn sleigh on house calls during snowstorms around the turn of the 1900s. The three bells from the sleigh now belong to his great grandson, Cameron, who lives in B.C.

In 1907, Dr. Godfrey entered politics as a Conservative candidate. His main goal, he told supporters, was to seek legislation to promote preventative medicine. He was elected in a by-election to fill a York West seat. Immediately, Dr. Godfrey made his presence felt by demanding the government take the lead in combating tuberculosis. In those days this disease took a heavy toll every year on Ontario citizens, chiefly young people, says The Mimico Story. “His investigations and findings led to the appointment of a government commission. As a result, a system of tuberculosis hospitals was set up.

Dr. Godfrey was also a champion of inoculation against infectious diseases and, along with several other doctors, helped to introduce an inoculation program to protect Canadian soldiers during World War 1. When G. Howard Ferguson was elected Conservative premier of Ontario in 1923, he invited Dr. Godfrey to enter his cabinet. The outspoken Mimico physician became Ontario’s second Minister of Labour in 1923 and first Health Minister in 1924. His early activities included: organizing the new Industrial Health Department from the ground up; enacting minimum wage amendments to include women working in theatres; broadening the Workmen’s Compensation Act to include silicosis and other diseases; and passing rehabilitation mining act amendments to require annual medical examinations of miners and rock crushers, and establishing a new Apprenticeship Branch, making trades training an important responsibility of the Department of Labour.

​“He sponsored industrial health programs, agitated for control of the newly-discovered insulin as a public trust, organized public health clinics for remote regions of Ontario and free inoculation and vaccination programs for Ontario school children,” The Mimico Story says. Dr. Godfrey also made insulin free to diabetics in Ontario, Mrs. McGimpsey says. Dr. Frederick Banting, another physician and scientist in Toronto, had discovered insulin in 1921. 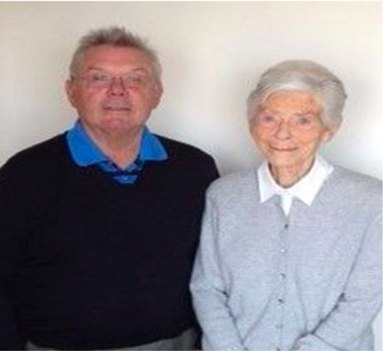 Godfrey’s granddaughter Marilyn McGimpsey with her son Kevin in 2018.
Mrs. McGimpsey says that while Health Minister her grandfather, accompanied by other doctors, toured brothels in Europe in the 1920s. The reason was that their brothels were regulated and Dr. Godfrey wanted to introduce a similar regulatory system in Ontario. This did not meet with Ontario government approval.

Mrs. McGimpsey recalls one instance where Dr. Godfrey’s political and personal lives merged. “My father and mother eloped in 1924 and kept it secret because my father was still in med school and my mother was in the midst of her law internship,” Mrs. McGimpsey says. “The ironic thing about the marriage was that, as Minister of Health, my grandfather was required to sign their marriage certificate which he did .... without noticing their names!”

Dr. Godfrey resigned from Cabinet in September, 1930. According to The Mimico Story, he had beem suffering for some years with pernicious anaemia, a vitamin deficiency for which no cure was known at that time.  Mrs. McGimpsey remembers on one occasion going into his room without knocking. She saw her grandfather and her father joined by tubes. “...my father was giving him a direct blood transfusion, which was probably the only way then.” Before the end of the 1930s, a relatively simple and effective method of controlling pernicious anaemia was developed, partly as a result of research programs that Dr. Godfrey had urged and supported. Today, it is treated with vitamin B12 doses.
​
When Dr. Godfrey passed away less than 16 months later, he was still an MPP. He was buried in Etobicoke’s Park Lawn Cemetery. The Town of Mimico observed a day of mourning. The Mimico Story says: “Mimico schools closed the day of his funeral, and Mimico citizens crowded Christ Church and the streets around it to pay tribute to the Mimico doctor who never hesitated to fight for what he thought his native province needed.”

With special thanks to Kevin McGimpsey, who travelled from Chester, U.K. to Bangor, Ireland and interviewed his mother and provided a photo of her. Special thanks also to Denise Harris of the Etobicoke Historical Society who helped trace Mrs. McGimpsey’s immigration with her husband, Robert, and newborn son, Kevin, to Northern Ireland in 1952. This led to the Ministry of Labour locating her and her son. Belinda Sutton is the Senior Communications Officer with the Ontario Ministry of Labour. This research was conducted in recognition of the 100th anniversary of the Ontario Ministry of Labour.
View More People