The Death family of Etobicoke can trace their ancestry back to 1527 with the birth of William Deathe of Dartford, England. His four-times great grandson, John Death, born in 1753, chose to become a silversmith in London – an occupation the family’s sons followed for the next three generations up to Thomas Death, born in 1788. Thomas married Charlotte Brown and in early 1831, they sailed to Canada with their three sons: Abel age 11, Daniel age 6 and infant George.

Initially they stayed in York (Toronto) where Thomas set up a silversmith shop on Yonge Street. Thomas heard there was land for sale on Church Street (now Royal York Road) in Etobicoke. He bought 50 acres of Lot 12, Concession II for $50. This property today would be on the west side of Royal York Road, south of Norseman Street. They built a log cabin and moved in, leaving the bustle of York far behind.
Unfortunately, Charlotte died in 1834 at age 39, leaving Thomas to raise their three sons on his own.

Lucy Ellen Betteridge MacDonald, a widow with a young daughter, moved in with neighbours of the Deaths. Thomas began to court this young woman, but so did Abel who was six years her junior. In 1839, Ellen and Abel married. In her later years, Ellen would laugh about being courted by both father and son, saying why would she would choose an old man when a handsome young man wanted her?
Thomas died in 1845 at age 57 and Abel inherited the property. Abel and Ellen raised Ellen’s daughter, Catherine MacDonald, and had six children of their own: Eliza b. 1840, William b. 1843, Thomas b. 1844, Charlotte b. 1849, Martha b. 1851 and George b. 1856. All of their children married into local families.

Abel was a hard-working and successful farmer, capable of any task. By 1851, he had built a new house of board and batten south of the log cabin on his own, and also made most of its furniture. Abel also bought land north of his father’s original lot and west to Islington Avenue, as well as land in other townships.

When his sons William and John married sisters Francis and Eliza Pattison, Abel bought them a 100-acre farm on the west side of today’s Hwy. 427, north of Rathburn Road. The brothers each farmed 50 acres independently. By 1880 John felt 50 acres could not produce enough income and he moved his family to a 100-acre farm in Downsview. However, in 1883 he left the Downsview farm and started his own business as a builder in Toronto. John changed the spelling of his family’s surname from Death to Deeth. (The original spelling likely originated from the French surname D’Ath around 1200 CE. The name went through various spelling changes over the years up to the current Death or Deeth.)
​
Meanwhile, William had bought John’s 50 acres in Etobicoke. He had built a new house in the 1860s which was occupied by Death family members for 90 years until it was demolished in the 1950s to build the Eringate subdivision. 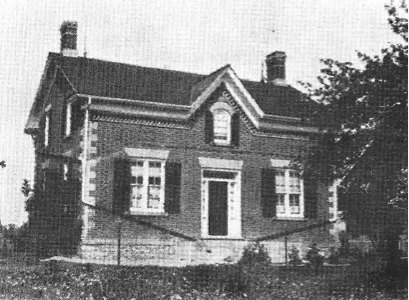 William Death’s house on west side of Hwy. 427 (Ruth A. Deeth)
Abel’s brother, Daniel, lived at home until he married Ellen Thompson and they moved to Dixie in Toronto Township (now Mississauga.) He purchased land there owned by his brother Abel on Middle Road (now the Queen Elizabeth Way.) Daniel and Ellen had three sons and one daughter before Ellen died of tuberculosis.  Daniel remarried to Mary Porter and they continued to live in the house on Middle Road where they had nine children – four boys and five girls.

When Daniel died in 1894 of an infected tooth, the farm passed to his son Walter.  After Walter’s death in 1949, his son Beverly inherited the property and sold it to a developer in 1952 who built the Applewood Acres subdivision.
​
Abel’s brother George never married. Abel bought a farm for him in Binbrook where George died of a brain tumour in 1862 at age 31. He is buried in the Islington Burying Ground.

Abel was 63 when he died in 1883 and Lucy died at age 71 in 1884: they are both buried in Islington Burying Ground. Abel’s youngest son George, became sole owner of all of Abel’s land adjacent to Royal York Road. George improved the farm and built two more houses on the property: a brick house built in 1890 at the corner of what became Norseman Street and Royal York Road, and a house built in 1928 that still stands today at 738 Royal York Road. George and his wife Jessie Christie raised four sons and one daughter at the latter house: Frederick, George, Alexander, Harold and Ethel. When George died in 1938, his son Harold took over the property – the fourth generation to live on that farm. The land was sold to a developer in 1951. 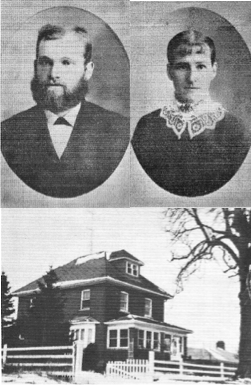 George and Jessie Deeth and their home at 738 Royal York Road. (Ruth A. Deeth)
​738 Royal York is one of several houses related to the Death family that are still standing. In 1909, Walter Death, a grandson of Abel Death, bought 50 acres of land overlooking the Mimico Creek valley and Martin Grove Road, north of Rathburn Road. By 1912, the year he married Bessie Carr, he had built the brick two-storey house that is now 98 Ravenscrest Drive.  The house faces west, overlooking the valley, and is now painted white. They lived in the house until retiring in 1945 and moving to a house on the southwest corner of Kipling and Burnhamthorpe. 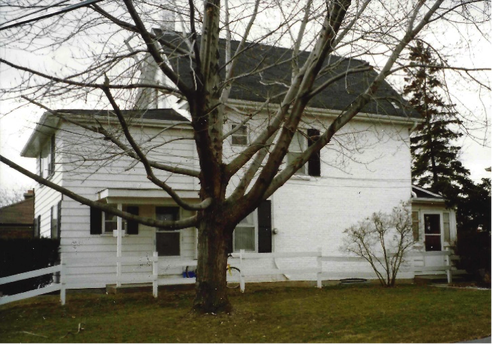 1990 photo of 98 Ravenscrest Drive, built by Walter Death ca. 1912 (Denise Harris)
​John Herbert Deeth, a great grandson of Abel Death, grew up in Toronto and became a well-known and loved family doctor in Islington Village. He graduated from the University of Toronto, and by 1940, John, his parents and his two sisters were living in their new house at 5052 Dundas Street West where John also established his medical practice. In 1941, he married Dorothy Chantler of Toronto and in 1946, they had one child, Susanne. John’s wife died in 1967, and John remarried Edith Bint in 1971. Edith died in 1973 and in 1974, John closed his practice and sold the entire building to Moffet and Duncan [Architects Inc.], who still own it. John moved to Oakville where he passed away, survived by his third wife, Imelda, in 1999. 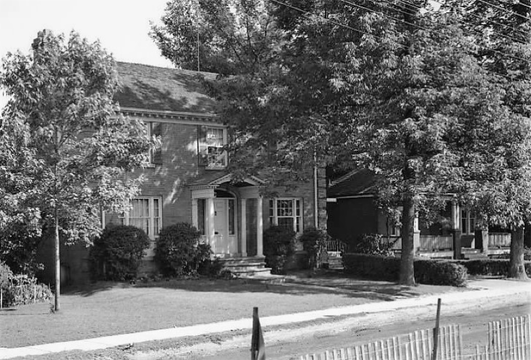 Dr. John Deeth’s house at 5052 Dundas St. W, in 1960. Today the trees are gone and the house is flanked by retail stores. (Toronto Archives)
In 1979, Dr. Deeth’s sister, Ruth A. Deeth, wrote a book on the history and genealogy of the Deaths who had immigrated to Canada in 1831 and their descendants. Whether their names were Death or Deeth, the book is full of fascinating stories about early days in Etobicoke. Called Journey from Yesterday, it is available for reading on-site in the Richview Library Local History Room and the Toronto Reference Library. Much of the information used in this article came from this source.