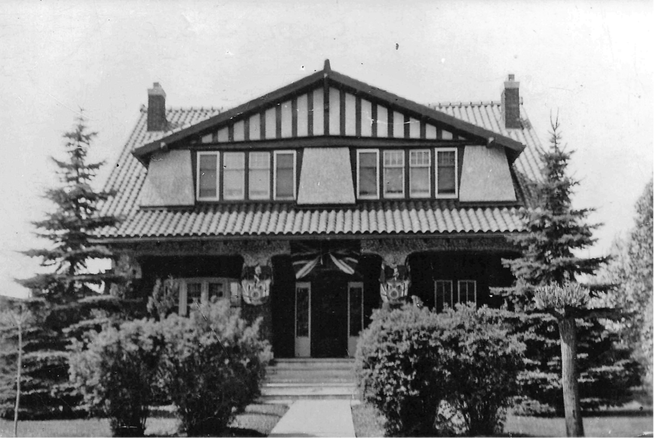 Colonel J.E.L. Streight’s residence at 68 Cordova Avenue, now demolished. Courtesy: MONTGOMERY’S INN
Many of you are familiar with the Colonel J.E.L. Streight branch of the Royal Canadian Legion on Jutland Road, or have seen Streight Lane running east off Kipling Avenue north of Six Points. But who was Colonel Streight and why was he chosen for these honours?

John Everett Lyle Streight was born in Islington in 1880 and lived on Cordova (originally Canning) Avenue his entire life. His father, David, owned a lumber business on the west side of Cordova, north of the CPR tracks.  The family home was adjacent to the business.

J.E.L. joined the army at 18, and enjoyed a 46-year military career. When the Boer War started, he signed up with the Canadian Mounted Rifles as a trooper. After the war, he joined the South African Constabulary. During the Natal-Zululand Rebellion, he again saw action and was badly wounded. He returned to Islington in 1908 and took over his father’s lumber business. When World War I began he served as a Captain with the 3rd Battalion in France. At the Battle of Ypres, he was captured by the enemy and sent to 13 different POW camps in Germany. He managed to escape – and be recaptured - seven times. When repatriated to England, he was decorated by King George V with the Military Cross for his service at Vimy and promoted to Major.

Streight came home to Islington to work in his business once again and to serve in the Governor General’s Body Guard. In 1921, he retired from the lumber business and ran for federal office as a Liberal, but was defeated. Around 1925, he built his new home, an Arts and Crafts bungalow, at 68 Cordova Avenue seen in the above photo taken in 1935 when the house was decorated to celebrate the Silver Jubilee of King George V and Queen Mary.

Streight was appointed Lieutenant Colonel in 1927 and full Colonel in 1933. He ran for federal office again in 1935 and won by 60 votes. He was honoured to command the Canadian contingent attending the coronation of King George VI in London in 1937. Streight retired from politics in 1940 and from the military in 1944. In 1949, he married for the first time to Margaret Elizabeth Galloway, a teacher 33 years his junior.

Streight passed away in 1955, remembered for “his exemplary life” and having led “one of the most adventurous careers of any man in Canada’s public life”, while “never forgetting his roots in Islington.” His widow, Elizabeth, sold the house in 1956 to the Warren family who lived there until selling it to a developer in 1969.  The house was demolished by 1972 to build apartments on Mabelle Avenue. Streight’s former property now sits under a TTC parking lot. Elizabeth taught at Burnhamthorpe Collegiate and lived in an apartment in Islington until her death in 2001. John and Elizabeth Streight are buried together in Park Lawn Cemetery.