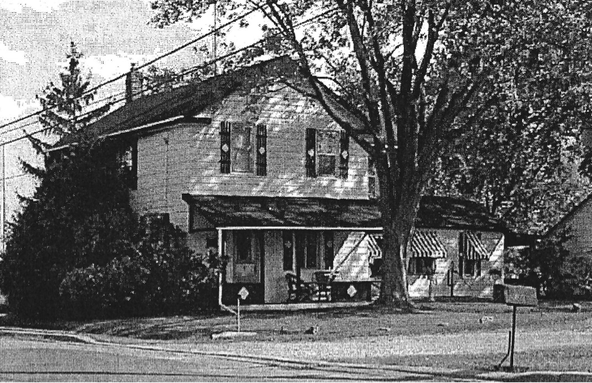 2095 Codlin Crescent, built ca. 1851 and once a tollhouse on the Albion Plank Road. Photo taken ca. 1985 when the house was owned by Fred and Audrey Henderson. Courtesy: CITY OF TORONTO URBAN PLANNING
In 2011, on a quest to look at every property in Etobicoke listed on the City of Toronto’s Heritage Register, I was surprised when I first saw 2095 Codlin Crescent in Claireville. This once well-kept house was now the rundown and spray-painted office of a tractor/trailer parking business. There was no information in the City’s file to tell me why this sad-looking building was on the Register.

Soon after, I was in the library at Montgomery’s Inn and by chance discovered a 1984 research paper on Claireville that said 2095 Codlin Crescent (originally 2095 Albion Road) “was initially used as the tollhouse for the Albion Plank Road.” The Albion Plank Road Company had been incorporated in 1846 to build an improved road from Thistletown, through Claireville to Bolton, and it passed right by this house.
Several primary sources proved that by 1852 a tollgate was located in Claireville, overseen by a series of tollkeepers. By 1871, the tollkeeper was Christopher Armstrong. But where was this tollhouse located in the village?

Fortunately, I was able to find Fred and Audrey Henderson, the last residential owners of 2095 Codlin. When they moved to Claireville in 1961, they were often told that their house had been called “The Tollhouse” for as long as anyone could remember. Then, shortly before selling the property in 2006, they were visited by a woman who was a descendant of tollkeeper Christopher Armstrong. She had been shown the house many years earlier by her grandmother, and knew she had the correct house because it was the only one with a front door facing west, perpendicular to Albion Road. The tollgate would have crossed Albion Road from the northwest corner of the house, making it easy for the tollkeeper to step out his door, collect the toll, and open the gate for the traveller.

Other records indicated that the house was built ca. 1851, making it the oldest building in Claireville. The house itself is an example of Neo-classical architecture. The gables all have prominent cornice returns, a feature of this style. The off-centre main entry door appears to be original. However, its life as a tollhouse was over by 1880 when the Albion Plank Road Company declared bankruptcy. For a long time, it has been thought that the only tollhouse left in Toronto is the one on the northwest corner of Davenport Road and Bathurst Street. Now we know there is a second one - little known and neglected - in Etobicoke. Not only has the Claireville tollhouse survived, it is also the only tollhouse still in its original location.