Christ Church Mimico is the Oldest Anglican Congregation in Etobicoke 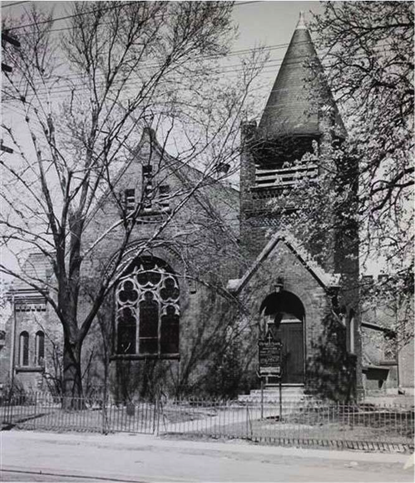 Anglican Christ Church Mimico, built in 1889 and located on the east side of Church Street (now Royal York Road), just north of the CN tracks. (Courtesy: Montgomery’s Inn)
The founding of Christ Church Mimico has been established as 1827 when it was recorded for posterity that the four children of John and Margaret Peeler – Joseph, William, Mary Ann and Charles - were baptized. This earned Christ Church Mimico the honour of being the oldest Anglican congregation in Etobicoke.

It is known that the first services were conducted in the home of local miller John William Gamble. In 1832, Gamble donated land on Church Street (now Royal York Road) for the congregation’s first church building, a small frame chapel with a porch, belfry and white picket fence. Enclosed pews were rented to members for one shilling, three pence per quarter year.

This congregation had only four rectors during its first 100 years. Rev. Thomas Phillips served as rector from 1827 to his death in 1849. He was succeeded by his assistant, Rev. Henry C. Cooper, followed by Rev. Francis Tremayne in 1877 and then by his son, Rev. H. O Tremayne, from 1919 until his death in 1934.

Christ Church played the important role of “mother church” for seven other new Anglican churches in Etobicoke, supporting their development until they were large enough to become independent parishes. These churches were St. Phillips in Weston, St. George’s in Islington, St. James in Humber Bay, St. Margaret’s in New Toronto, St. Agnes in Long Branch, St. Elizabeth’s on The Queensway and the Church of Atonement in Alderwood.

In 1877, Christ Church Mimico’s first building was enlarged with the addition of a chancel. However by 1889 they had outgrown the frame church completely and for $5,000 built the larger church of red brick that you see in the photo above. It was designed by the fledgling architectural firm of Charles Gibson and Henry Simpson.

In 1956 the congregation need more space and demolished their first brick church, building a new one of yellow brick in a modernist style. Sadly, this building was seriously damaged in two fires, three months apart, in 2006. The congregation made the difficult decision to deconsecrate the church and demolish what remained of the building. The congregation then worshipped with St. James Church in Humber Bay, and in 2010 the amalgamated parish of Christ Church St. James was established. The cemetery that surrounded Christ Church has been turned into a memorial garden where the church bell is preserved and benches encourage all visitors come in and sit a spell.