Capitalizing on Railway Helped Connect the Village of Islington 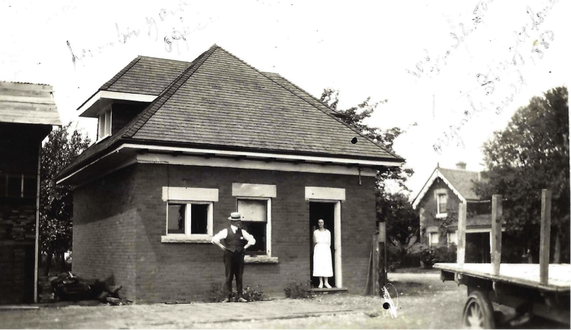 David Streight and his wife, Elizabeth, standing in front of the lumber yard office on the west side of Canning Avenue (now Cordova Avenue) just north of the CPR tracks. Their house can be seen on the right, on the east side of Canning Avenue (Montgomery’s Inn)
Like most small towns, the Village of Islington had its share of natural leaders with the energy, imagination and foresight to stimulate progress. David Lyle Streight was one such community builder.

He was born in 1842, the second son of John Streight and Jane McDowell, who had settled in 1836 on a bush farm near Kemptville in Grenville County. David was named for his uncle, David McDowell, who operated a contracting business in Islington. In 1856, McDowell offered to teach his nephew the carpentry trade through a five-year apprenticeship in Islington. David would live with his uncle, attend school in the winter, and earn an average of $40 per annum. David’s parents saw this as a wonderful opportunity to provide for their son’s future.

After the apprenticeship, David Streight completed his first job as a journeyman carpenter in Etobicoke, but work was scarce and Streight moved to several different places in the U.S. and Canada. In January 1868, he returned to Islington and started his own highly successful contracting business. In 1870 he married Elizabeth McKeown, a teacher in Islington.

In 1878, the new Credit Valley Railway was opening its line across Etobicoke. Streight decided this was a wonderful opportunity to start a retail lumber and coal business to augment his contractor work. However, the CVR had no plans to build the siding at Islington that his plans would require.

Undeterred, Streight approached CVR management directly and presented his case. The railway agreed, as long as the three affected landowners (Woolings, McBride and Coulter) donated a 20-foot (six meter) wide graded piece of land along the north side of the track, plus $250 in cash.

At this time, Cordova Avenue did not exist, and Islington Avenue was discontinuous between Dundas and Bloor streets. Residents had complained for years that poor access to their village deterred growth. At Streight’s suggestion, Etobicoke’s Council agreed that the arrival of the CVR would be the perfect time to open a new north/south street through Islington.

Villagers contributed half the cost of this new road and the Township paid the other half. When the new road was laid out, 1.5 acres (.6 ha) of Mr. Woolings land was severed and sold at auction to Streight. In 1880 he built a family home on this lot, seen in the above photo.

The new street was named Canning Avenue after the reeve, Matthew Canning. (This street was renamed Cordova Avenue in 1947.)

The CVR opened the railway siding as promised, as well as a small flagstop station just west of Islington Avenue. In 1884 the Canadian Pacific Railway bought the financially-troubled CVR. Streight dropped the contactor arm of his business in1893 as the lumber and coal operations were far more lucrative. He continued to take a leadership role in Islington for several decades to come, as we will learn in a future column.