Camping in Long Branch Was ‘All the Rage’ in the 1920s 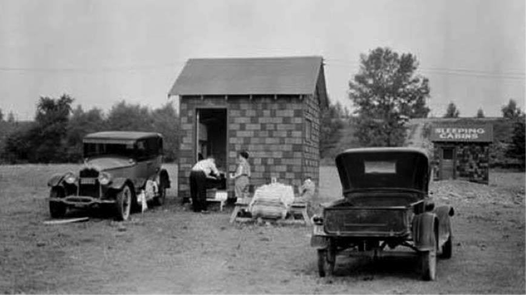 Vacationers originally came to Long Branch by train or steamboat to stay in hotels, cottages or tourist homes. By the 1920s more and more people owned cars, and “camping” in sleeping cabins became all the rage. This couple are staying in one of a dozen cabins built in the Etobicoke Tourist Camp, adjacent to Etobicoke Creek, north of Lake Shore Blvd. W. Their car is a 1925 Studebaker sedan with Ontario licence plates. The setting looks rather bleak with little shade and the CNR running along the embankment behind the bushes, yet travellers found it to be a welcoming and inexpensive getaway from city life. This type of accommodation remained popular in Long Branch until the 1940s when the area began to attract industry and year-round residents.   (Courtesy: Montgomery’s Inn)