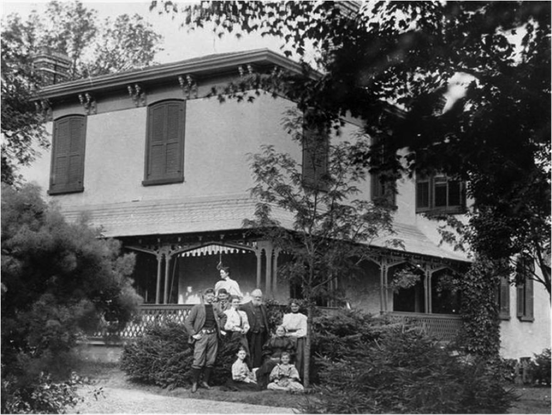 “Briarly”, the home of William and Jessie Montgomery on Dundas St. W. in Islington, ca. 1900. Bearded man is William, and Jessie sits in a chair to his left. Courtesy: Montgomery’s Inn
The home known as “Briarly” was named for the briar roses that once adorned its gardens. And like those roses, this lovely mansion adorned the landscape of Islington for over 150 years before disappearing forever 25 years ago.

Believed to have been built as early as the 1820s as a one storey Regency cottage, the house was sold to wealthy businessman John Bull Bagwell in 1850. He enlarged the house, adding a second storey, a surrounding porch and Italianate detailing. The exterior was covered in white stucco, with a front door of stained glass. Inside, the house had a graceful staircase, fine woodwork, marble fireplaces, and elegant plaster mouldings. Surrounded by a white picket fence, the house sat in a treed, park-like setting.

In 1870, the house was bought by Janet Douglas as a gift for her daughter and son-in-law, Jessie and William Montgomery. William was the eldest son of Thomas and Margaret Montgomery, and the only one of their seven children to survive them. In 1879, William inherited all of Thomas’s vast estate, including Montgomery’s Inn and many other properties across Ontario. Briarly was the perfect setting for this wealthy couple to raise their ten children. Jessie died in 1915 at age 83, and William in 1920 at age 89, and both are buried in Islington Burying Ground.

Descendants continued to own Briarly, with the last occupant being William’s grandson,  Donald Gunn. When Gunn died in 1986, his will directed that Briarly be offered for sale to the City of Etobicoke at 20% below market value, but the City declined the offer. Briarly was subsequently sold twice on the open market. In 1989, the last owner offered the house to the City for free if they removed it from the property. There was empty city land adjacent to Montgomery’s Inn to place the house; the cost to move it would be $200,000; and an architecture firm offered to restore the house in exchange for 25 years occupancy, with the house turned back to the City at the end of that time. This seemed like the perfect solution not only to save Briarly, but also to complement the heritage of Montgomery’s Inn.

Sadly, Etobicoke’s Council voted against paying for the move - by one vote. In August, 1989, Briarly was demolished. It was replaced by a private street of townhomes called “Briarly Lane.” To those who value our heritage, it’s difficult not to remember that if Etobicoke Council had voted differently in 1989, we would be experiencing the pleasure of seeing a restored Briarly transferred back to the City this year.