​While perusing old scrapbooks in the Local History Room at Richview Library, I came across a clipping of a newspaper article, an interview with Amos Waites, a former councillor and mayor of the town Mimico. Unfortunately, there was no date or source for the article, but it is an interesting look at life during the early part of the 20th century in Mimico.

In the first part of the article, Amos reminds us of how cold the winters were at the turn of the century: “I was born in 1895. My father bought about five acres up on the Queensway, just a little west of Kipling. He started a market garden there. Our family were all born there. When I first started school, my mother used to get potato sacks and cut them into strips in the winter time and wrap them around our legs and tie strings on them because we had to walk through the deep snow.”

When he was only 11 years old, Amos got his first job at the one room school house he attended at the corner of Birmingham and Sixth St.

“A trustee came up to our house on Sixth St. to see if he could get some person to look after the school as caretaker. Somebody had to get up in early morning starting late fall to light the stove. I got the job as caretaker. I’d be 11 years old then. I got a salary of $2 a month. I never went to high school. There was no high school in this whole area; there weren’t enough pupils.”

Despite his lack of formal education, he went on to become a councillor and mayor of the town. This shows how limited formal education was in those days. I remember my own father, who was born in Toronto in 1927, telling me that most students left school after grade 10 in order to pursue work. Amos was not even able to make it that far due to there being no high school at all by the time that he left grade 8, around 1913. This reminds of how rural Mimico was at the time.

Amos went on to talk about the Depression, and we are reminded how life was difficult for not just the citizens, but for the town council as well.

“In the Depression, a lot of our taxpayers were [part] time at Goodyear and Anaconda Brass. They weren’t an awful lot better off than some of those on welfare. A lot of people lost their homes in that Depression. They couldn’t afford to pay the interest on their mortgage. We went into bankruptcy as a town. We couldn’t get enough tax money…. to meet the interest on our debentures. The government appointed a supervisor for Mimico. He sat in the town hall and the treasurer of Mimico couldn’t issue a cheque unless the supervisor put his initials on it. They watched every dollar. They were bad years and I hope we never see years like that again.” 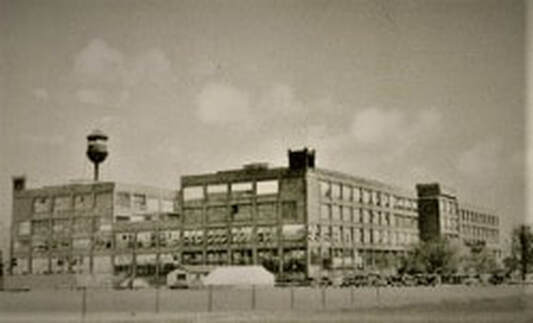 Goodyear Tire and Rubber Co, New Toronto, 1927. Photo source: The Toronto Public Library
​So, I said to the chief [of police] ‘You better start sending a policeman up to the council meetings.’ We had a kind of a rough bunch [like the] Worker’s Association. We had a couple of Communists in there that caused a lot of trouble. I never knew just what was going to happen.

So, the next meeting, my uncle… came up and started shooting off. I said, ‘That’s all, take your seat.’ He wasn’t going to take his seat. He just grinned and laughed. I said, ‘Officer, put this man out.’ My uncle had been saying that the police were in with the bootleggers. Of course, he wasn’t popular with the police. Well they weren’t in with the bootleggers at all. So, the policeman yanked him off his feet. His hat fell off. I didn’t want to cause too much trouble, so I said, ‘As long as he behaves himself, he can stay at the meeting. We’ve had enough of that nonsense.’

When you get characters like that up there, you’ve got to know your job. If you’re a weakling and can’t handle them, they’ll walk all over you. I guess I lost a few votes over it because people said: ‘Well, that wasn’t a very nice thing to do, to call the police to put his uncle, the ex-mayor, out of a meeting.’” 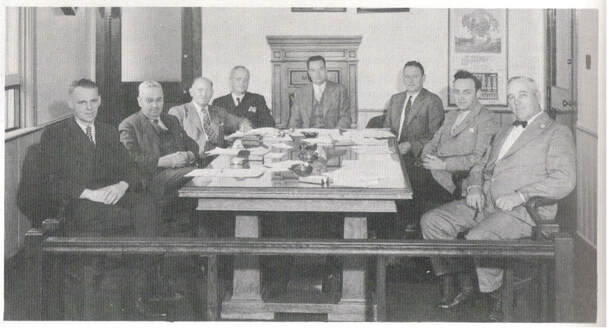 Meeting of the Town of Mimico Council, 1943. Amos Waites is in the centre. Photo source: Currell, Harvey - Town of Mimico, Public Domain, Wikipedia 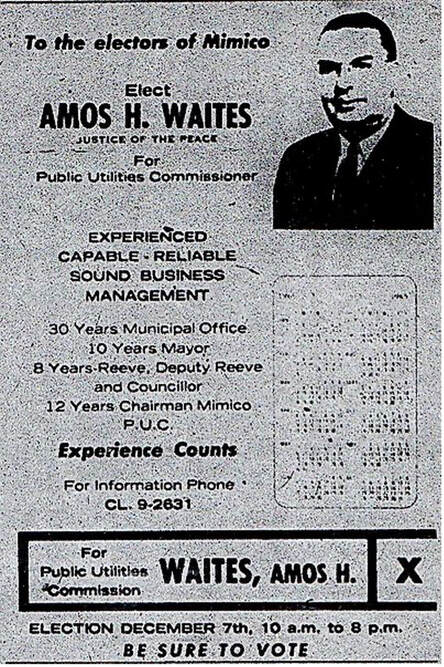 Amos Waites 1953 Campaign Poster. Photo source: Urban Affairs Canada, Public Domain,
As you can see, politics in a small town like Mimico could get pretty exciting at times. A little background digging shows that Amos Waites must have been a popular mayor, since he held his post for three terms: 1936-1940, 1943-1945 and 1947-1948. His uncle, Robert Waites, was less popular, being in office 1930-1932. I think we can see why.