Like many areas in Etobicoke, Alderwood has been required to change many of its original street names. Most of these changes were made to eliminate duplicate street names created by the formation of Metropolitan Toronto in 1953. Without these changes, there could be postal delivery errors and misdirected emergency service calls.

​However, some of Alderwood’s original names have survived and we’re going to explore the origins of a dozen of them in this article.

ALBRIGHT AVENUE: Reported to have been named after a Sergeant Albright who died in one of the World Wards. Unfortunately, this could not be verified as no Albrights in the Toronto area are listed in the Canadian Virtual War Memorial.

BROWN’S LINE: Named after a dirt track leading to the farm of John Brown who was the first permanent settler in Alderwood. He emigrated from Yorkshire in 1831 and bought the land north of Evans Avenue, west of Brown’s Line.

CONNORVALE AVENUE: Named after the O’Connor family who lived in a house on this street from 1878 to 1989. John and Ellen O’Connor had eight daughters who formed the famous O’Connor Sisters Act in vaudeville, radio and television. The street was originally called O’Connor Avenue, but was renamed Connorville Avenue in 1956. 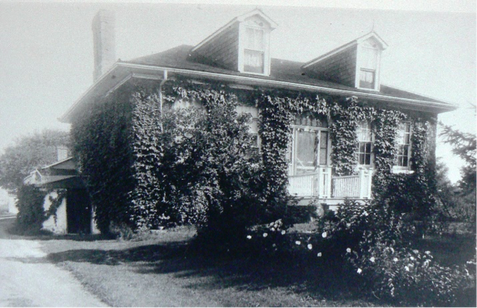 The O'Connor House on Connorvale Avenue in 1960s (Montgomery’s Inn)
​EVANS AVENUE: Named for George Evans, an early settler in Alderwood who owned a farm north of Horner Avenue at Brown’s Line.

GORT AVENUE: Named for Viscount Gort, a British field marshal in both World Wars. He was awarded the Victoria Cross for his actions at the battle of Canal du Nord.

HESLOP DRIVE and DELMA DRIVE: Both of these streets were named by the area’s developer, Rex Heslop, after his family. Delma was his wife’s first name. Heslop established Rex Heslop Homes Ltd. in 1946 and built 400 inexpensive homes in Alderwood on cheap land that the township had acquired for non-payment of taxes. These homes are north of Horner Avenue, west of Brown’s Line and south of Thames Avenue. After he ran out of land in Alderwood, he moved his business north and started developing land in the Rexdale Subdivision, also named for him. 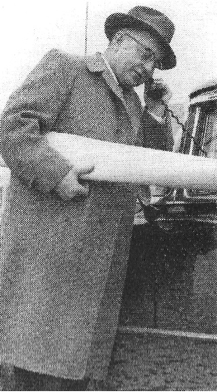 Rex Heslop with one of the two mobile phones in his Cadillac in 1956 (Mike Filey)
HORNER AVENUE: Named for the Daniel Horner family who moved from Markham to Alderwood in 1874. He purchased an existing large house and 300 acres of land northeast of the Brown’s Line and Horner Avenue intersection. His son, Frederick, was trustee for the local school for 20 years.

JELLICOE AVENUE: Named for John Jellicoe, First Earl Jellicoe and Admiral of the British Fleet. He commanded the Grand Fleet at the Battle of Jutland in World War I.

LLOYD GEORGE AVENUE: Named for David Lloyd George, the energetic British Prime Minister of the Wartime Coalition Government during and after World War I. He was a major player at the Paris Peace Conference of 1919.

LUNNESS ROAD: Named for Joseph and Annie Lunness, settlers from Ireland who owned a stock farm on Lot 10, Concession II in Alderwood.