Among the many items in the archives of our Society is a plaque that once was attached to Agar’s Bridge – see the photo below. The bridge, built in 1921, spanned Mimico Creek at Martin Grove Road, just north of Rathburn Road. It probably replaced an older bridge at that point on the road north to Smithfield. The bridge was named for the Agar family who owned the land there (more information on them can be found by clicking here). The plaque was salvaged by Edward John Walkerley when the bridge was demolished, most likely in 1961, to make way for the current bridge. The plaque appears to be made of brass and is 31cm wide, 23cm high. Walkerley’s son, William, donated it to the Society in 2012. 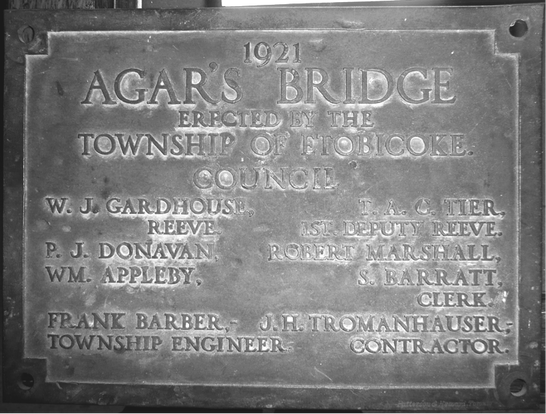 Plaque from Agar’s Bridge - Etobicoke Historical Society Archives.
Several names are recorded on the commemorative plaque. One of these is Frank Barber, listed there as Township Engineer. James Franklin Barber (1875 -1945), to use his full name, was the engineer for several townships and counties in southern Ontario. He is especially remembered for championing the use of a new technology – reinforced concrete – to build bridges in the province. By the end of his career he had designed or built well over 400 bridges. Several of these were in Etobicoke, including the still surviving Middle Road (1909), Old Mill (1916), and Lambton Dundas (1928) bridges. Barber was supported by a large engineering office in the 1920s. Those wishing to learn more about his bridge building career should consult Esther Phyllis Rose’s Frank Barber and His Bridges, a thesis written for an MA at the University of Toronto in 1985 (located in the University’s engineering library).

Most of the other names inscribed on the plaque are those of Etobicoke Council members. On Saturday, April 16 1921, the Etobicoke municipal council instructed Barber to “prepare plans and specifications for a concrete arch bridge over the Mimico Creek on Concession 1, C lot 12, to be known as the Agar Bridge.” No reason was given for this decision. But the Council was concerned in the early 1920s with unemployment, the supply of water and electricity, and with the improvement of the Township’s roads. Agar’s bridge was one of three built that year, the others being the Anderson and Long Branch bridges. The cost of the bridges along with some other infrastructure projects came to $29,844.50. About $6000 was paid for by the provincial Ministry of Public Works, the remainder was covered by the Township in cash and through a $20,000 loan. This was not considered to be problematic since the Township’s rateable property at the time was about $4.5 million. 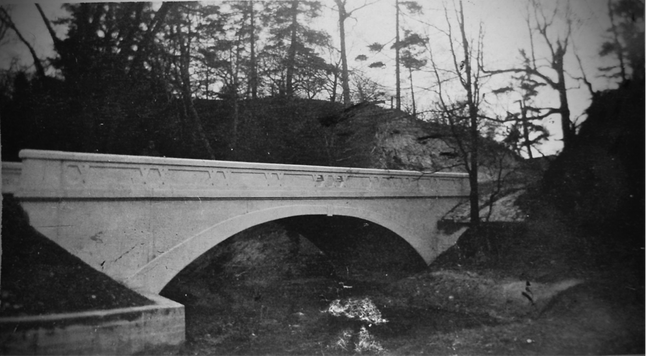 Agar’s Bridge, probably 1921. (James Franklin Barber fonds, F2077-2-2-8, Archives of Ontario).
The last name on the plaque is that of the contractor, J.H. Tromanhauser. His bid of $8440.74, the lowest of eight tenders, was accepted by the Council on June 6 1921. However, there must have been some cost overruns or unforeseen expenses, for at the completion of the work Tromanhauser was paid $11,489.20. The bridge was finished before the winter set in. A photo of it, likely taken just after it was built, can be found below. Barber’s bridges are known for the beauty of their design, and Agar’s bridge was no exception.
​
Researched and Written by Phillip Enros.
View More Places