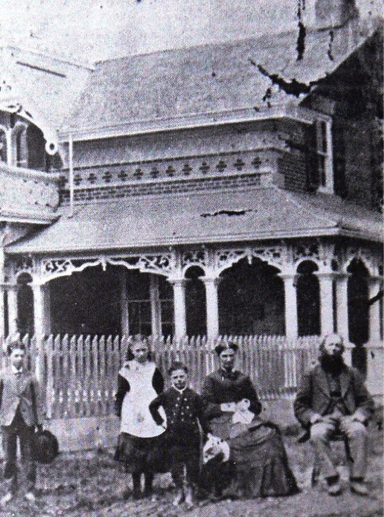 James and Ann Gardhouse with their three eldest children, John, Jane and Thomas, in a ca. 1867 tintype in front of their home “Rosedale” at Lot 32, Concession 4 in Highfield (Gardhouse Family)
The John Gardhouse family arrived in Canada from England in 1837, and developed a family business in Etobicoke importing and breeding livestock. This enterprise became famous across North America and would go on to provide a livelihood for five generations of this family.

John Gardhouse settled in Etobicoke with his wife Isabella and their five children. John’s younger brother, Robert, had married Isabella’s sister, Mary, and they had moved to Etobicoke in I826. Robert owned 93 hectares of land spread over three lots north of today’s Rexdale Blvd., on the western edge of Etobicoke. Robert sold all of his land to John, but continued to live on the farm until he died in 1857.
John became more and more interested in breeding and showing livestock. He started by showing Shorthorn cattle at larger agricultural fairs. Encouraged by his wins, he imported the best stock he could afford from England: Shire heavy horses, long-wooled Cotswold sheep and Berkshire pigs.

John’s eldest son, James, joined his father in the business, eventually taking over as manager a few years before John died in 1873. James married his schoolyard sweetheart, Ann Stobbart, and they had 14 children, only eight of whom lived to adulthood. In 1863, they built a large new home on the north side of Rexdale Blvd., west of Humberwood Blvd. Named “Rosedale”, the house had ten rooms, wide verandahs, white pillars, ornate brickwork and gingerbread trim, as seen in the above photo. The house was a local landmark for 100 years.

James continued to improve his livestock, earning accolades such as this one from the Hon. David Marshall: “James Gardhouse took charge of his Rosedale Farm and laid the foundations of the breeding operations, which probably were more extensive and of greater variety than that of any other Canadian farmer.” In 1876 James bought 60 additional hectares of land to house his herds.

James’ sons, John and James Martin (called “Mart”) joined their father in his business. In 1887, they won never-before presented awards at the Toronto Industrial Exhibition for the best imported draught stallion and five progeny and for the best Shorthorn bull and four females. James retired to a house in Toronto, leaving the business and “Rosedale” to his son, Mart. He won many championships during his career, but was most proud of earning the Grand Championship for the best ram and ewe at the St. Louis World’s Fair in 1904.
Mart’s two sons, Leslie and Fred, joined his business from 1916 until Rosedale was sold in 1937. They then moved to separate farms nearby and continued the business.

There are many more Gardhouses who were in the family livestock trade than I can fit into this column. For more information about this family, you can find a whole chapter on the Gardhouses in the book Etobicoke: From Furrow to Borough by Esther Hayes, available in many branches of the Toronto Public Library.