The small village of Summerville was located along Dundas Street on both sides of Etobicoke Creek, which was the border between Etobicoke Township and Toronto Township (now Mississauga.) However, this community was originally called Silverthorn’s or Silverthorn’s Mill after the family of John and Esther Silverthorn who moved from Niagara and acquired land along Dundas Street on both sides of the creek. Their eldest son, Joseph, established a farm called “Cherry Hill” and his house still stands at 608 Silver Creek Blvd. in Mississauga.  It was once a restaurant, but as of 2017 it sits empty. Their second son Thomas was injured in the War of 1812 and unable to farm, so he opened Summerville’s first inn on what today would be the northeast corner of Southcreek Road and Dundas Street in Mississauga.

John built a large log house on the Etobicoke side of the river north of Dundas and called it “Mill Farm”.  In 1811, he and his youngest son Aaron built saw and grist mills of stone just north of Dundas Street, damming the river to create a mill pond. They also built a bridge over the river and opened a road from Burnhamthorpe south to Dundas to give their customers better access to their mills. The bridge was washed out in Hurricane Hazel, but the road north of the creek is still called Mill Road today, running through the Markland Wood subdivision.  Aaron inherited the property when John died in 1846.
​
A shrewd businessman, Aaron made wise property investments which made money for his descendants, including the land where Sherway Gardens and Queensway Hospital were built and at St. Clair and Old Weston Road where Silverthorn Avenue is located.
The original Silverthorn log house burned down in 1869, and Aaron immediately replaced it with the stucco over frame dwelling that you see below. Aaron passed away in 1872, predeceased by his wife Mary Custead in 1853. The Silverthorn properties passed to their son Newman. 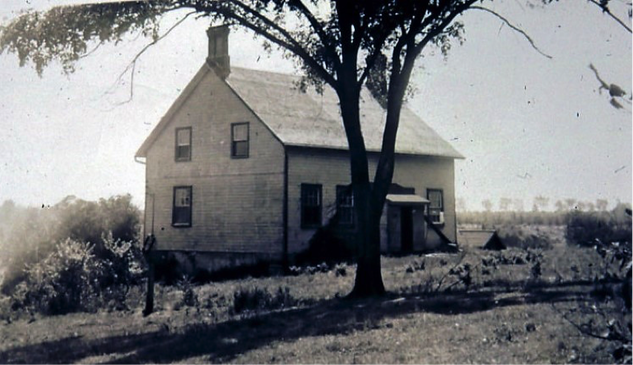 The second “Mill Farm”, built in 1869 by Aaron Silverthorn after the original log house burned down. Source: Etobicoke Historical Society
The Etobicoke side of the Creek was primarily farmland, whereas almost all of the commerce in Summerville was located along Dundas west of the Creek. As early as 1830, a small frame church was built on Dundas east of the creek on the property of the Culham family. It was used by travelling ministers from several different churches, including Anglican, Methodist, Baptist, Presbyterian and others. For a long time, it was the only church of any kind between Islington and Cooksville, and was still being used as a Sunday School in the 1860s.

The village along Dundas Street had a population of about 100 and was officially named Summerville when the first post office opened in 1851, located in the hotel that Thomas Silverthorne built. James Telfer was the postmaster. The exact source of the name Summerville is unknown, but it is of Irish origin and several residents on both sides of the creek were from Ireland. The next postmaster was William Ward, who lived on the Etobicoke side of the creek. By 1871, William O’Brian had turned the hotel into a general store which it remained until long after the post office closed in 1919. 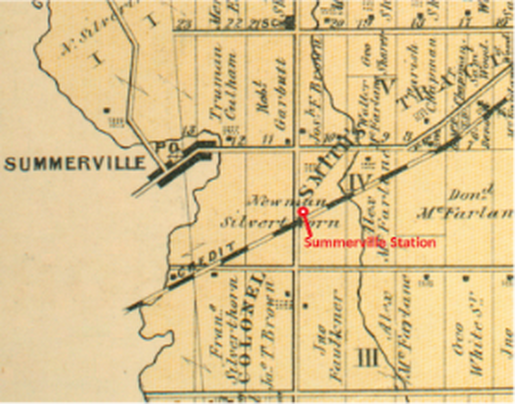 This building was originally built as Thomas Silverthorn’s hotel and converted to a general store in 1871. The Summerville post office was located here from 1851 to 1919. Source: Randall Reid
By 1865, the village had a population of 200 and there was the prospect that a community of some size might develop. There were two blacksmith shops, a cooperage, two taverns, one saw and one grist mill, two schools (one on Dixie Road in Mississauga and one at Bloor and Brown’s Line in Etobicoke), a Methodist church, and a general store. In 1892 James Sabiston built a carriage and wagon factory. Of these enterprises, the only one in Etobicoke was a tavern called the Stone Tavern, operated by William O’Brien and located on the northeast corner of Dundas and today’s Highway 427. Despite lacking a liquor licence, the inn was a thriving coach stop. Subsequent owners were Andrew Patterson, and John Browner.
​
However, in the mid 1860s, a sudden decrease in the water flow in Etobicoke Creek forced the mills to close. William Ward of Etobicoke and J.T. Smith tried to revive them, but the venture failed. When the Credit Valley railway was put through Etobicoke in 1879, it declined to have a stop in Summerville. After that, the population soon dropped to 100, but the village continued to exist on a smaller scale.

Dundas Street in Summerville looking west from Etobicoke Creek ca. 1910. Source: Randall Reid
In Etobicoke, the land on both the north and south sides of Dundas was all farm land from the 1830s to the 1950s. On the north side, from west to east, the larger, multi-generational farms were those of John Silverthorn, Joseph Culham, Robert Garbutt, and Andrew Ward.  On the south side were John Silverthorn, and brothers Alexander and Donald McFarlane.
​
For the Silverthorn family, Newman Silverthorn worked hard to improve the family farm, undertaking a massive project to restore the thousands of trees removed on the farm over the years. He moved into a new house that his mother had bought for him on the south side of Dundas Street at today’s Highway 427. 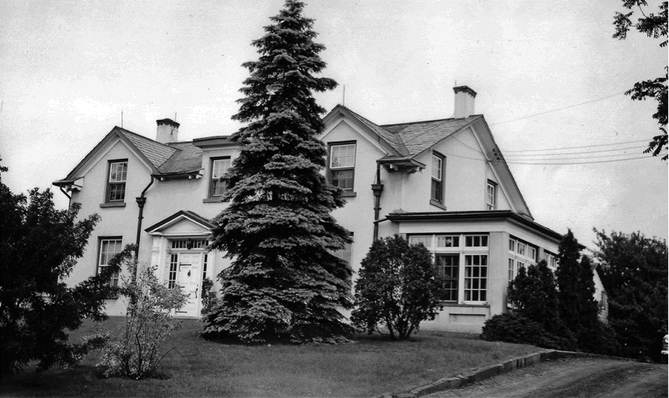 The Newman Silverthorn house on southeast corner of Dundas St. W. and Highway 427 in 1953. Six generations of Silverthorns would lived in this house, and four generations would be born there. (Source: Montgomery’s Inn)
Newman’s son, Charles, was the Reeve of Etobicoke when he died suddenly in 1917 in a collision with a Toronto Suburban Railway car on Dundas Street in front of his house. Charles’ son, Gideon, had to leave Guelph Agricultural College and return home to run the farm. When Newman died the following year, Gideon became the heir of his grandfather’s estate of 1,000 acres of land. Eventually there were three Silverthorn family homes on the south side of Dundas Street in Etobicoke.

After World War II, farming became less and less profitable, and the city of Toronto was encroaching. In 1951, Gideon decided that change was needed and, with his family’s approval, he began to sell off their land. Dearborn Chemical, Lennox Furnace and Carling Breweries bought the first lots and built factories.

Gideon moved to Thorncrest Village and an A & P store and warehouse (Food Basics in 2017) were built on the south side of Dundas where his house had been.
​
After being in the family for 148 years, Mill Farm was sold to Mark Cavotti, who developed it as the Markland Wood subdivision, keeping his promise to Gideon to save as many of Newman’s trees as possible. The fire department burned down the 1869 farm house as a training exercise.  It was the end of an era.

The following are photos that have survived of a few of the other homes in Summerville on the Etobicoke side: 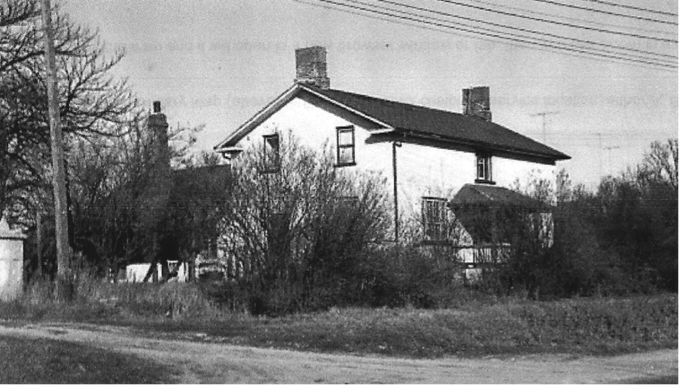 Home of Andrew Ward from Ireland on north side of Dundas at today’s Shaver Avenue. Built ca.1830; demolished 1952. His brother Joseph had a house on the south side of Dundas immediately east of Etobicoke Creek. The family went bankrupt in 1863 and lost the 500 acres of land they owned. Joseph moved to Iowa but Andrew and his descendants remained in the Toronto area. Source: Toronto Archives 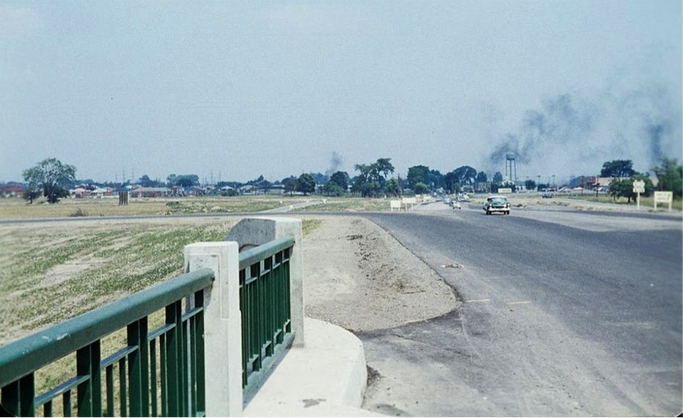 Looking east on Dundas St. W. from the Highway 427 overpass in 1954. On the left, the empty field with some trees will soon be the site of Cloverdale Mall. On the right is the new A&P store and warehouse on what had been Silverthorn land. Source: Toronto Archives

Cloverdale Mall in 1956, its opening year, looking north. Source: Toronto Archives
​The last trace of Summerville to disappear was the blacksmith shop located just west of Etobicoke Creek.  It had been built by Isaac Wilcox on the north side of Dundas Street in 1867. Its last blacksmith was Robert Parton who operated it from 1916 to 1965, retiring on his 80th birthday. Despite many discussions about preserving the building, it was demolished and the pieces carted away for re-use by the City of Mississauga in 1979. 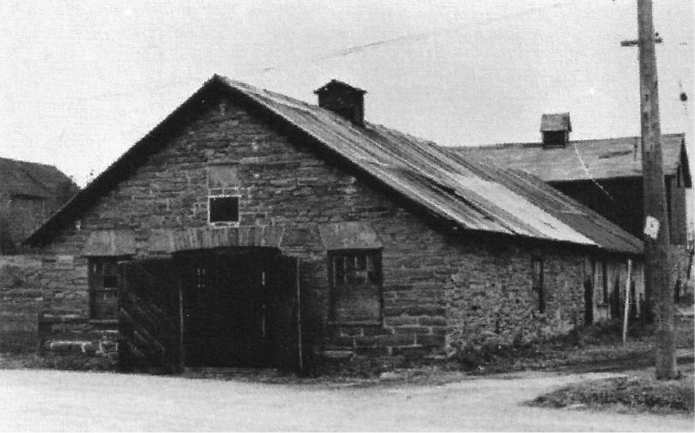 Robert Parton’s blacksmith shop in the 1920s on the north side of Dundas Street, just west of Etobicoke Creek. Demolished 1979. Source: Heritage Mississauga
Researched and Written by Denise Harris
Learn About More Neighborhoods