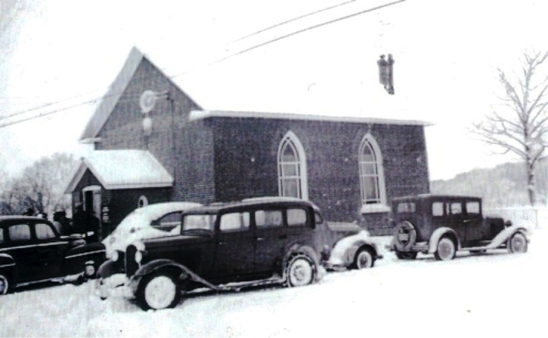 Sharon United Church in the early 1940s, located in village of Highfield, on the north side of Rexdale Boulevard, east of Humberwood Boulevard [Courtesy: Montgomery’s Inn]
The weather outside is frightful, but that didn’t keep members of this small church from braving the snow to share in the uplifting atmosphere of Sharon United Church on this particular Sunday in the 1940s.

The story of Sharon United Church began about 1838 when English lay preacher William Hainstock and his wife Ann moved to Highfield, a hamlet on today’s Rexdale Blvd., centering around Highway 27. By 1842 they had opened their home for church services led by itinerant pastors. About 1845, local Methodists built a log church on the north side of Rexdale Blvd., west of today’s Humberwood Blvd., on a .6 acre piece of land donated by Richard Thomas. A cemetery soon developed west of the church.

In 1856, a new brick church was built adjacent to the log chapel. It measured 26 by 36 feet, with a stone inscribed “Primitive Methodist Chapel 1856.” The old log chapel was taken down for firewood in 1871. The church name was changed to Sharon Methodist Church in 1884, and then to Sharon United Church in 1925.

In 1955, the congregation had dwindled considerably as a result of the sale of area farms to developers and to the New Woodbine Racetrack. The church was closed, and both the church building and its cemetery were placed under the care of Thistletown United Church. The Sharon United Church building was demolished in 1967, but the cemetery beside it remained. By the 21st century, Sharon Cemetery was in poor condition. With the efforts of many volunteers and public donations, the cemetery underwent a complete restoration 2005-8.

The cemetery contains about 160 burials, and 75 grave markers were found during the renovation, many of which were buried under a foot of soil. The oldest stone marks the grave of Mary Etherington who died in 1845; the most recent marker is for Mary Elizabeth Thomas who died in 1948. A new, central monument was erected listing the 57 families whose ancestors are buried there, including the names of many founding families such as Ackrow, Appleby, Codlin, Dutchburn, Gardhouse, Hainstock, Kellam, Mashinter, Moody, Peacock, Stonehouse, and Thomas. This cemetery is the only surviving 19th century property from the pioneer community of Highfield and it became a designated heritage site in 2012. Although a bit of a challenge to access the cemetery on foot, you are welcome to enter the cemetery through its south gate to explore.