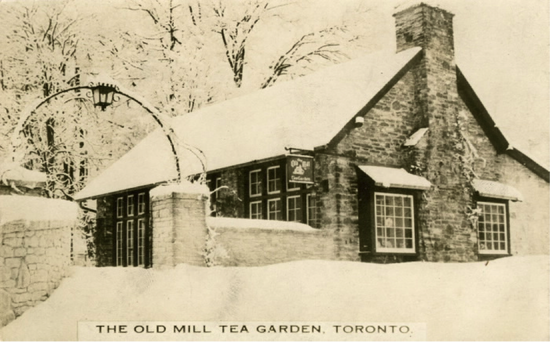 The Old Mill Tea Garden on an old postcard, the first building in what would become today’s landmark Old Mill Inn and Spa (Courtesy: The Old Mill)
On August 4, 1914, Britain declared war on Germany, automatically bringing Canada into World War I where its contributions to the war changed history. That same day, a much smaller event, but also with long term impact, took place in Etobicoke... Robert Home Smith opened the Old Mill Tea Garden. This tea room expanded over time to become today’s Old Mill Inn and Spa, which is celebrating its 100th anniversary this year and where afternoon tea is still an honoured tradition.

Robert Home Smith was the developer of 3000 acres of land that he had amassed along the Humber River valley, creating beautiful subdivisions like Kingsway Park. He also provided amenities for buyers of his properties, and the Tea Garden was one of the first he built. It was tucked away in a wooded valley next to the Humber River and the picturesque ruins of William Gamble’s 1849 grist mill.  Its Tudor-style architecture helped bring to life the motto of Home Smith’s business: “Angliae Pars Anglia Procul” - a bit of England far from England.
As its popularity grew, Home Smith began the first of many additions to the tea room. By 1921 they were offering dancing on a new dance floor to live music. By 1928, Home Smith’s firm had offices in a new wing, with a private cottage for him. Even through two world wars and a depression, the Old Mill remained a popular venue - one of the few that offered excellent food with dancing in an elegant setting. Expansions over the years included banquet rooms, a wedding chapel, and a gift shop. Michael Kalmar, owner and president since 1991, undertook a large expansion in 2001 to add a boutique hotel and spa constructed of stone from Gamble’s “Old Mill” ruin.

Miraculously, the original tea room still exists within the Old Mill’s large complex and can be seen immediately southeast of the main entrance to the dining room on Old Mill Road. In honour of their centennial, the Old Mill has posted a gallery of old photos on their website. I believe it’s possible that the Old Mill Dining Room is the oldest restaurant in Toronto: if you can think of an older one, please let me know.