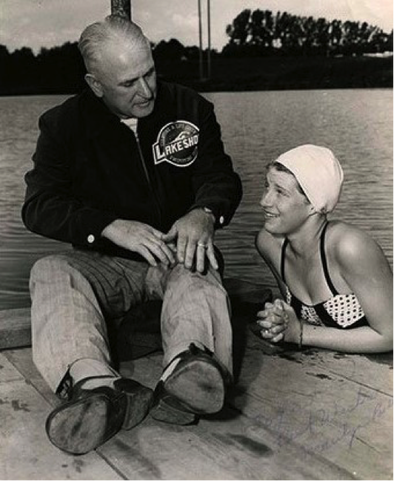 Gus Ryder coaching Marilyn Bell in 1954 [Courtesy: emaze.com]
Born in Toronto in 1899, Gus Ryder demonstrated a natural athletic ability as a young man. After he rescued two fellow hockey players who had fallen through the ice on Grenadier Pond in 1916, he vowed to make swimming instruction his personal avocation.

In 1930, Ryder moved to New Toronto where he founded both his own customs brokerage business and the Lakeshore Swim Club. As a result of his enthusiasm, over 700 people joined his club that first year.

In summer, his students were taught in Lake Ontario at the foot of Seventh Street and later in Etobicoke Creek and the Credit River. They used Toronto’s West End YMCA and Humberside Collegiate in winter. They finally got a permanent indoor pool when the Town of New Toronto supplied land and some capital, and the club raised the balance of the funds needed to open New Toronto Memorial Pool on Faustina Drive in 1952.

Ryder was a natural teacher and an innovative coach whose athletes achieved widespread success in swimming competitions. His first major star was local resident, Lou Gamble, who said that Ryder not only coached her to multiple wins but also taught her the values of personal commitment and community service.

Cliff Lumsdon was another local resident coached by Ryder. Lumsdon won the World Marathon Swimming Championship in 1949, for which he also received the Lou Marsh Trophy as Canada’s top athlete. He then won four more world championships and was inducted into the Canadian Sports Hall of Fame.

Ryder also coached marathon swimmer Marilyn Bell who, in 1954, at age 16, was the first person to swim across Lake Ontario. She swam the English Channel in 1955 and the Straits of Juan de Fuca in 1956. Bell is listed in the top ten of 20th century Canadian female athletes.
Over Ryder’s 56-year volunteer career, it has been estimated that over 200,000 children learned to swim at his Lakeshore Swim Club. He was personally most proud of the program he instituted to teach physically-challenged children to swim. Ryder was awarded the Order of Canada in 1975, primarily for this work with children.

There are two Toronto swimming pools that bear his name today: Sunnyside Gus Ryder Outdoor Pool at 1755 Lake Shore Blvd. W.  and Gus Ryder Pool (formerly New Toronto Memorial Pool) in New Toronto.  Ryder passed away in 1991, but his legacy endures as the Lakeshore Swim Club is still a leader in its field, using the New Toronto pool as its primary practice site.