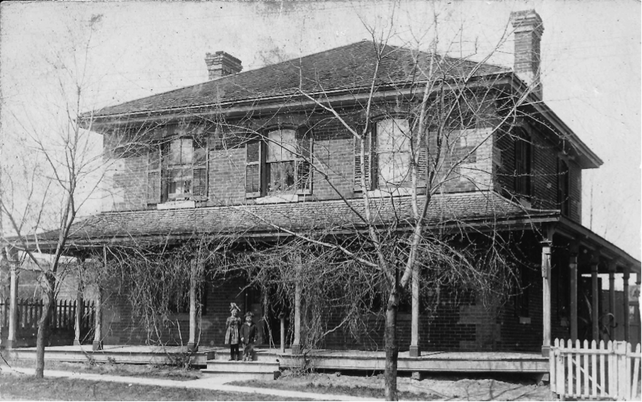 Thomas and Elizabeth Musson lived and operated the Islington Post Office in this house at 4884 Dundas St. W. from 1887 to 1906. This building still exists. Montgomery’s Inn/Photo
In my last column, we talked about the pioneer family of Amasa Wilcox. This week we will learn about the Musson family who lived in a more settled era which saw major changes in government.

Brothers Edward and Thomas Musson emigrated from England in 1820, settling on the west side of the Humber River at Weston where they owned a very successful tavern, distillery, brewery, and sawmill. In 1843, Edward moved to Islington with his wife, Ann Smart, and their eight children. He purchased 90 hectares of land, part from Amasa Wilcox and part from the Clergy. He developed a very productive farm on land that today is Islington Golf Course.

Edward now owned the store, mill and house on Burnhamthorpe that Amasa had built. By 1852, Edward’s eldest son, Thomas, age 21, was managing the store. In 1855, Thomas married Elizabeth Thomas, and they lived in an apartment at the east end of the store. When Islington got its first post office in 1860, it was located in this store with Thomas as postmaster.

By the 1850s, half of the Mimico Creek watershed had been cleared of its forest cover.  As a result, the mill’s ability to generate power was decreasing. Musson’s mill had a vertical blade, and locals joked that his saw was so slow, it went “up in the morning and down in the afternoon”. By 1870, the mill was forced to close.

Baldwin’s Municipal Corporations Act of 1849 gave Upper Canadians the right to elect their own local government. Then, in 1867, four provinces united in Confederation. These two events helped solidify citizen confidence in their new country. Edward was elected Reeve of Etobicoke from 1851 to 1858.  He was also a director in the Etobicoke/Mono 6th Line Plank Road Company which built a road along Burnhamthorpe to the northwest.

In 1871, Edward built a new brick home for his retirement which still stands on the northeast corner of Burnhamthorpe and Kipling. He died the same year, with little time to enjoy his retirement.

There were major delays in settling Edward’s extensive estate. Thomas owned the general store, but soon had three mortgages on it. His creditors foreclosed in 1886, and sold the store. Thomas rented a house at 4886 Dundas St. W. that is a listed heritage property today. He operated the post office from that location, even after Edward’s estate was settled in 1895. Thomas died in 1899 and Elizabeth took over as postmistress until 1906. The post office moved back to the general store with owner John Dunn as postmaster.

Islington showed clear signs of progress during Musson’s era. By 1895, the village had a brick schoolhouse, two brick churches, a municipal hall, a library, one hotel, four stores and a CPR station.
​
The eastern half of the Musson’s property was sold in the 1890s to the Appleby Family, whom you will meet in my next column.