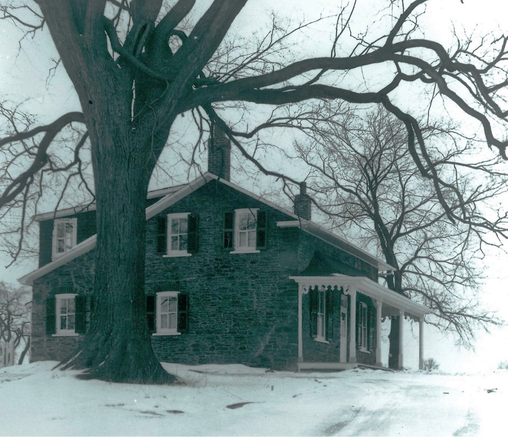 West side of the Bigham/Agar house ca. 1930. Set high on a hill, the front faces south, overlooking Rathburn Road. Courtesy: MONTGOMERY’S INN
Unless you look up at just the right moment, it’s easy to miss this beautiful stone heritage house, perched on top of a steep hill, on the north side of Rathburn Road, east of Martin Grove Road.

Its builder, Andrew Bigham, was born in Ireland in 1767 and immigrated to the United States in 1792.  In 1800 he married Mary Fortunis, and they had four daughters and one son before Mary passed away in 1806. Andrew then married Mary Copeland and in mid-1807, the they immigrated to Ontario.

In 1808, Andrew was granted land based on his British military service. He and Mary settled on a 26-hectare property northeast of today’s Martin Grove Road and Rathburn Road intersection where he initially built a log house. They would eventually have three daughters and seven sons on this property. Andrew also erected a saw mill on Mimico Creek, which ran through his property.

The exact date their new stone house was built is unknown. It was definitely in place by the 1852 census, but it was designed in a fairly uncommon “saltbox” style, suggesting construction in an early colonial period, i.e. 1820-40. The walls are made of river stone, possibly from Mimico Creek. The front door has three panels, with a mullioned transom above. The house’s interior still has its pine woodwork and stone fireplaces. A covered verandah runs across the front of the house, facing south and overlooking the Mimico Creek Valley. (Rathburn Road was not put through east of Martin Grove Road until 1962.)

When Andrew died in 1843, he left the farm to his two youngest sons, Samuel and Jonathan, although Jonathan soon transferred his share to Samuel. Samuel married Eliza Ash in 1849. In the 1850s, Samuel purchased the 14-hectare property east of their first lot to Kipling Avenue. The family also owned about 25 more hectares of land south of Rathburn on both sides of Martin Grove Road.
In 1889, having no children of their own, Samuel and Eliza transferred ownership of their property to Samuel’s niece, Mary Ann Bigham Agar and her husband George Agar. From there ownership passed to their son John Agar and his wife Ida in 1915, and then to John’s uncle, Elmer Agar, in 1946.

In 1954, Elmer filed a plan of subdivision for most of his property east of Mimico Creek to Kipling.  He named this new subdivision “Glen Agar” and Glen Agar Drive after his three-year-old grandson.

Today we can still catch an occasional glimpse of the original Bigham stone house. The families have been commemorated in the naming of Bigham Crescent near Renforth and Eglinton, and Agar Crescent southwest of Rathburn and Martin Grove.