Around 1948, my parents, Hans and Magdalena Boehnke, befriended an old English farmer named Leopold Chard.  Leo was already in his late seventies when they met.  He had come to Canada from England in 1889 at age 18.  Starting early, he owned several Ontario farms including one in Lambton Mills, finally settling on 40 hectares on the southeast corner of Richview Side Road and Highway 27 (now Eglinton Avenue West and Highway 427.) Richview Side Road was a wonderful gravel road which wound its way westward past all the working farms so close to Toronto at that time – right up until the mid-1960s.  Here Leo raised Shorthorn cattle and kept a few geese, ducks and sheep. 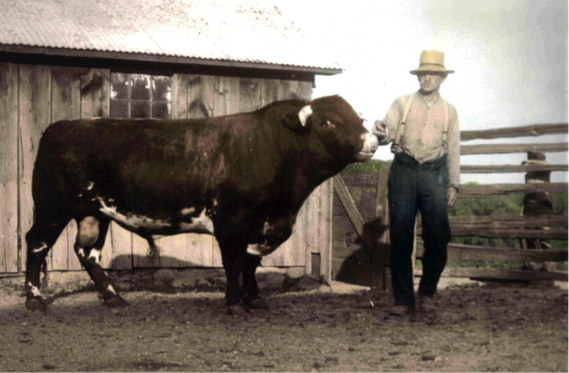 Leo with his favourite bull, Curly, about 1949.
​Leo would periodically take cattle to the stockyards at St. Clair and Keele Streets in Toronto to sell.  Hans would go to the yards to select his cattle. Here Hans was introduced to Leo by Freddy Fortune, a drover they both knew. Hans and Leo hit it off immediately.  Leo invited our family to his farm for a Sunday picnic: Hans, Magdalena, my brother Hansie and me, Richard.  And so it was that for several years the Boehnkes ended up spending at least six or seven Sundays a summer in the Mimico Creek valley beneath the cool willow trees and meeting occasional cattle who would visit our little picnic site. Our “camp” was about 400 m immediately south of the Richview Side Road bridge over Mimico Creek, in a copse of willow trees that is still there. 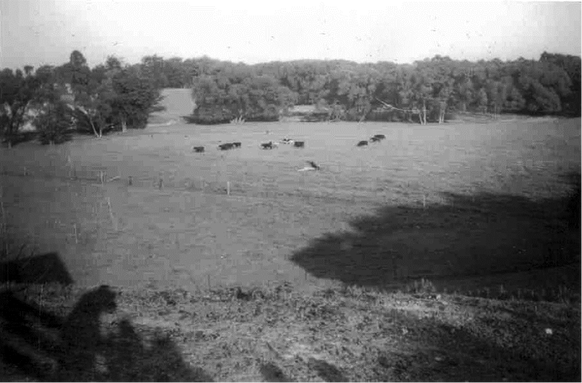 This photo looks southeast over the valley of Mimico Creek. The picnics were held in the willow trees in the distant centre of the photo. Cows dot the field.
​It was wonderful to play in the shallow creek water where, as a bonus, we were able to catch tiny fish, providing our first fishing experience. 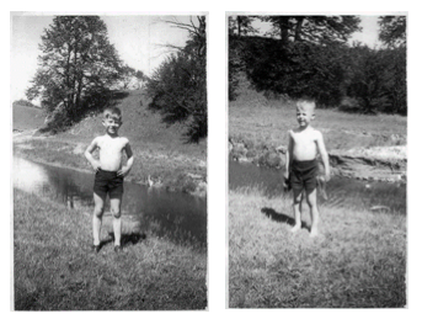 Richard (L) and Hansie (R) beside Mimico Creek.
It was also here that Hansie and I rode our first bareback horse, and where we learned how to behave among livestock.  “Remember,” Leo said, “If you’re in a field with a bull, watch him real close - and if the bull starts to paw or sway, face him right on. If he charges, let him come and don’t move until he drops his head – then run like hell for the nearest fence before he knows he missed you!  Do it again if you have to, but get out of the field!”  This speech, and others, were delivered with regular splats of chewing tobacco spittle. Hansie and I were fascinated. How could Leo do that spitting while chewing.  So we tried a little chaw of chewing tobacco, but only once – absolutely horrible stuff!!
​
Leo had two draft horses, Tommy, a white Percheron gelding, and Nellie, a Clydesdale mare.  It was a big thrill when he would hook them up to a wagon and all of us would get pulled along.  Once our 1952 Chrysler Saratoga got stuck down the hill on one visit when things got quite muddy after a rain.  No problem for Tommy and Nellie: they hauled the car out of the mud with ease, and then quickly pulled the heavy car up the hill to firm ground. 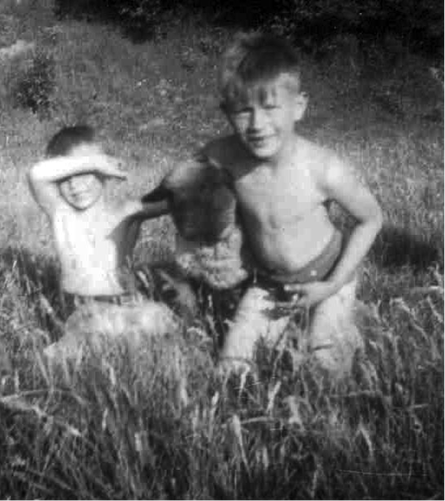 Hansie and Richard with Leo’s pet sheep, “Billy”.
Leo loved to make up a pot of tapioca because he knew that Hansie and I liked it.  On one winter visit to the farm, Hansie tried to cross the icy creek and ended up flooding his boots.   Up to the house we went until Hansie got himself dried out – and had a bowl or two of tapioca.
​
Leo cooked a roast of beef each week, and once he prepared sandwiches for Hansie and me, cut from unrefrigerated meat.  When our Mother found out, she almost fainted.  Nevertheless, sanitation notwithstanding, the sandwich was delicious and we were glad we had it.
Leo and his wife Annie did not live together. “Happier apart!” he said. They had two daughters and a son. Daughter Matilda married Frank Birkett and they had Anne, while daughter Elsie remained single. Son Thomas married Bertha Semple, and the couple had two daughters, Patricia and Elizabeth. Leo always spoke glowingly of his three granddaughters. While his family’s visits were somewhat infrequent, we were all of a mind that a little loneliness was one reason he seemed to enjoy our company. 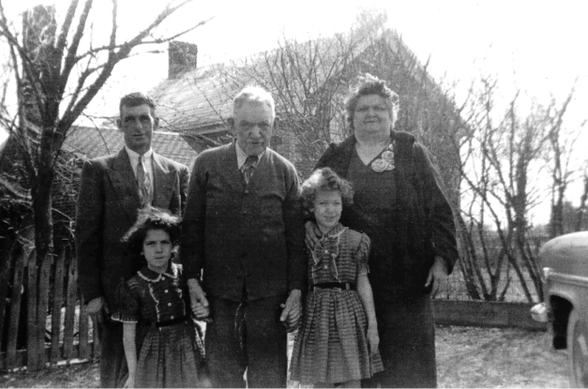 Leo Chard with Tom Chard’s family at Leo’s farm (L to R): Tom, Patricia, Leo, Elizabeth and Elsie.
Once, Leo was attacked by some thug in his barn late one evening and he always said that he wished that Hans was there and the problem would have been solved.  Hans appreciated that high regard from his elderly friend and wished he had been there, too.
Living alone, Leo’s house was truly unkempt – a housekeeper he was not! At least once per season our pretty mother, Magdalena, would rush through the kitchen, cleaning and tidying in a whirlwind of industry. We know that she always brought joy to Leo simply to see her, and he always appreciated the instant clean.

In 1955, Leo decided to capitalize on the appreciated value of his land, and he sold the farm, likely to the Province for flood plain or roadways, He bought another farm in Tullamore, 22 Km northeast of Brampton. On this new farm, there was a small pond. Four days after moving in, his granddaughter Anne Birkett, age 22 and a teacher in Thistletown, drowned in the pond, apparently while putting up a sign to warn children of the deep water.  It was a hammer blow to old Leo who always blamed his moving for the tragedy and was stricken with grief that lasted until he died in 1957. His friend, Hans, was honoured to be a pallbearer at Leo’s funeral.
​
My cousin, Helga Hüge, first met Leo in 1950 when she arrived from Germany with her family as a teen. She remembers that he “welcomed me with a warm embrace within my first hour on Canadian soil. I also remember the meadow with its stand of willow trees under which we had our lavish picnics. Leo was a sensitive man. He did not come down [to the creekside picnic site] until one of us went up to get him for the picnic meal.  He wanted to give our family privacy and time to relax.” 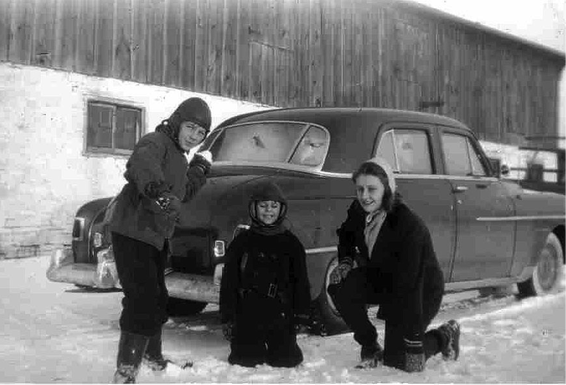 In our family Leo was always a great friend and a good man.  May he rest in peace!

Written and researched by Richard Boehnke​.

All photos courtesy of author except second last photo which is from Montgomery’s Inn.
View More People