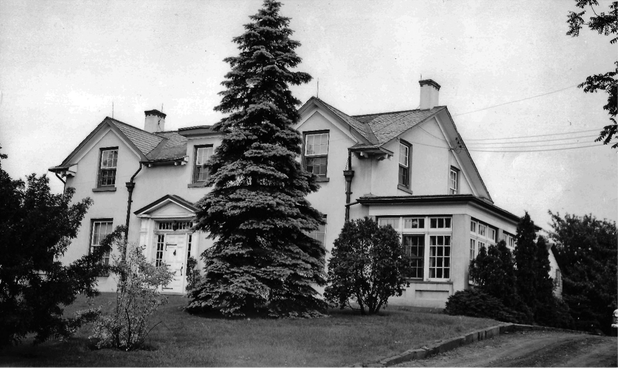 House on Lot 10 in the southeast corner of Dundas St. W. and Highway 427 in 1953. Occupied in sequence by Newman and Alvira Silverthorn, Charles and Margaret Silverthorn, and Gideon and Nell Silverthorn. (Courtesy: Montgomery’s Inn)
(Part II of the Silverthorn Family Story – Part I was published December 3, 2015)

After Aaron Silverthorn died in 1872, his son, Newman, inherited Mill Farm. Newman had left home in 1849 at age 20 to seek his own way. When he returned home in 1869, he brought with him his wife, Almira Beal of Chicago, and two sons. Newman lived in a house (see photo above) that his mother had bought for him before her death, located on Lot 10 on the south side of Dundas, east of Highway 427.

He worked hard to improve the family farm, undertaking a massive project to restore the thousands of trees the farm had lost over the years. Newman’s youngest son and heir, Charles, was educated at the Ontario Agricultural College. In 1894 he married Margaret Coulter, and Newman and Alvira gave up their house on Lot 10 to the newlyweds. Newman built a new house on Lot 12 on the south side of Dundas, west of Highway 427. Charles was a councillor in Etobicoke 1911-12 and reeve 1913-17. In 1917, Charles died suddenly when his automobile collided with a Toronto Suburban Railway car on Dundas Street. Charles’ eldest son, Gideon, had to leave the Guelph Agricultural College and return home to run the farm. When Newman died the following year, Gideon became the heir of his grandfather’s estate of 400 hectares. Charles’ widow, Margaret, moved into the house Newman had built on Lot 12, and Gideon and his wife Nell moved into the house on Lot 10.

After World War II, farming became less and less profitable, and the city was encroaching. Gideon knew it was time for change and so, with his siblings’ agreement, he began to sell off their farmland for industrial use. In 1951, a piece of lot 10 was sold to Dearborn Chemical, followed by sales to Lennox Furnace and Carling Breweries.

Gideon lived on Lot 10 until 1958 when he moved to Thorncrest Village. Lot 10 was sold and an A & P store and warehouse (now Food Basics) was built on the property. Mill Farm, after being in the family for 148 years, was sold to Mark Cavotti, who developed it as the Markland Wood subdivision, keeping his promise to Gideon to save as many of Newman’s trees as possible. The fire department burned down the 1869 Mill Farm house as a training exercise.  It was the end of an era.