Humber Bay began on the shore of Lake Ontario, growing westward from the Humber River to Mimico Creek, and north to today’s Berry Road. The Humber River mouth was one of the earliest areas used by the British for fishing, milling, ship building and travel. Although Humber Bay was never incorporated as a village or town, it had a post office with that name from 1886 to 1952, as well as its own school, churches, stores, volunteer fire service, library, and community centres.

Lake Shore Bl. W. (called Lakeshore Road until 1959) was first surveyed in 1791 along the path of an ancient aboriginal trail, making it one of the oldest roads in Ontario.  A ferry across the Humber was established ca. 1802, operated by Richard Wilson. Tolls were charged to create a fund for a future bridge. The first crude log bridge was built in 1809 but was quickly washed away in a storm.  Over time, more substantial bridges were built of wood, iron and concrete.

With its long sandy beach for swimming and the lake for boating, the waterfront was a popular recreation area right from the beginning. On a rise above the beach was a large open area known as “The Lawn”, used for picnics and garden parties. By the mid to late 19th century, there were several boat livery businesses on both sides of the Humber River near its mouth.  A bit further north the river widened into a large pond that was popular for pleasure boating, regattas, picnics, camping and even horse racing on the ice in the winter. 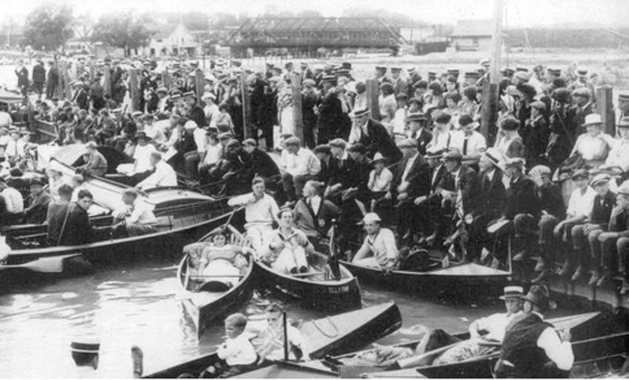 A crowd attending a regatta at the mouth of the Humber River in the 1920s. Photo is looking north to the iron bridge on Lakeshore Rd. over the river. (Source: Toronto Public Library)
By the 1870s, three large resort hotels had been built on Lake Shore Bl. W. Ca. 1870, Charles Nurse built a hotel on the west bank of the Humber, south of Lake Shore Bl. W., where his dining room was famous for its fish dinners. West of Nurse’s was John Duck’s Wimbledon House, built in 1873. His hotel was known for its “pleasure grounds”, including caged wild animals, a merry-go-round, an open-air dance floor, and live music. 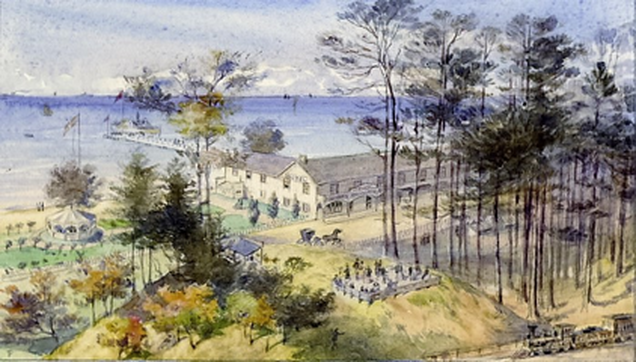 Colourized drawing of John Duck’s Wimbledon House in 1878 (Source: 1878 Atlas of York County)
Opposite Nurse’s on the north side of Lake Shore Bl. W. was the Royal Oak Hotel, built in 1852 by John McDowell and named for a tree that grew up through the front verandah roof. Around 1877, the Royal Oak was purchased by Octavius Laing Hicks, a man of many talents: boat builder; boat livery owner; businessman; inventor; and bridge builder.  In 1882, Nurse, Duck and Hicks, together with brewer Eugene O’Keefe, formed the Humber River Ferry Co. Ltd.  Their boats, the Annie Craig and Mazeppa, made four trips daily bringing customers for all three hotels from Toronto to a wharf on John Duck’s property. 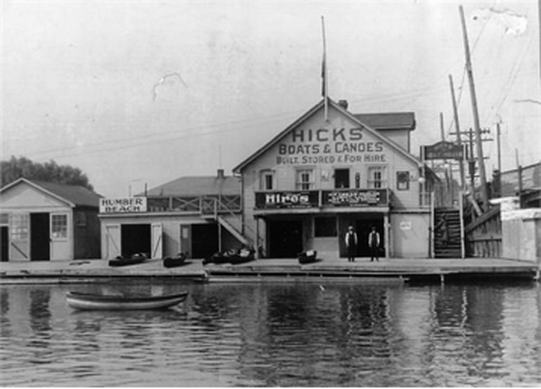 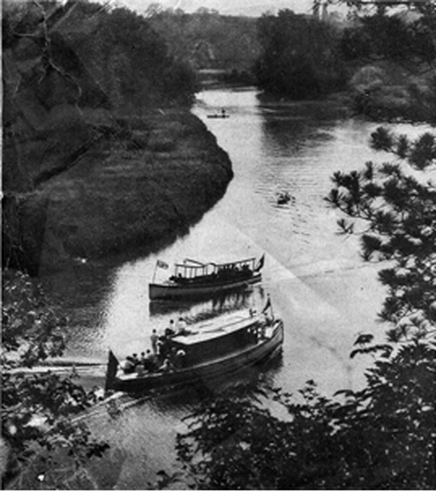 Two boats built by Octavius Hicks in the Humber River on September 8, 1923. Large boat is the Visitant and the smaller boat is the Turbinia. (Source: Toronto Star)
Things began to change in the early 1900s as the automobile grew in popularity. At that time, Lake Shore Bl. W. was lined on both sides with houses. By the 1920s, some residents had added tourist services to their properties, including campgrounds, cabins, restaurants, and gas filling stations.  It all began when some American tourists asked the Hicks family if they could erect a tent near their hotel. The Hicks then opened their “Humber Bay Tourist Camp” on the beach side of Lake Shore Bl. W.  Other residents soon followed suit.  Just east of John Duck’s hotel was the fenced-in Edgecliffe Beach, owned by Emil Brooker.  He also opened the Rendezvous Dance Hall, the Edgecliffe Tea Room, and the area’s first drive-in restaurant, Brooker’s Barbecue. 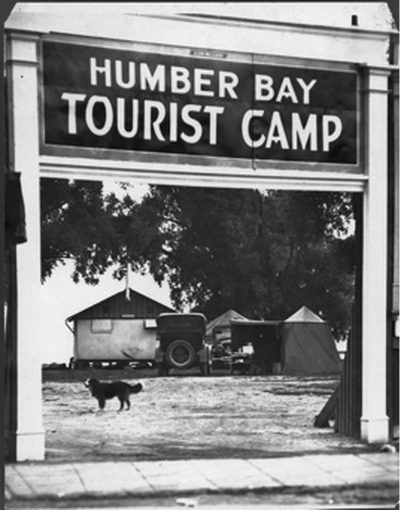 Main entrance to Hicks’ Humber Bay Tourist Camp ca. 1924, looking south towards Lake Ontario.( Source: Toronto Archives)
One stormy night it was suggested that campers seek shelter at A.M. Legge’s large brick house on the waterfront.  A few days later, the Legges decided to go into the tourist cabin business.  They opened their first six cabins in 1927 beside their house.  In 1939. the Butwell family opened the first true modern motel, the Shore Breeze, beside their family home, with cabins integrated under one roof, and car parking in front of each room.  This type of accommodation came to be called a motor court or motel. Over the next two decades, more and more motels were built along Lake Shore Bl. W., with names like Cruise, Seahorse, Rainbow, Beach, and Silver Moon. Because these motels were built adjacent to homes on long narrow lots, they were generally perpendicular to Lake Shore Bl. W. and lined up in parallel rows. 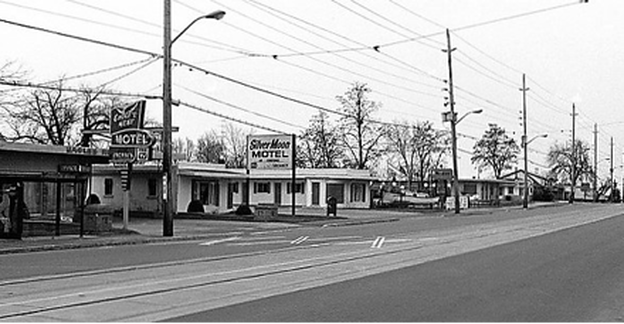 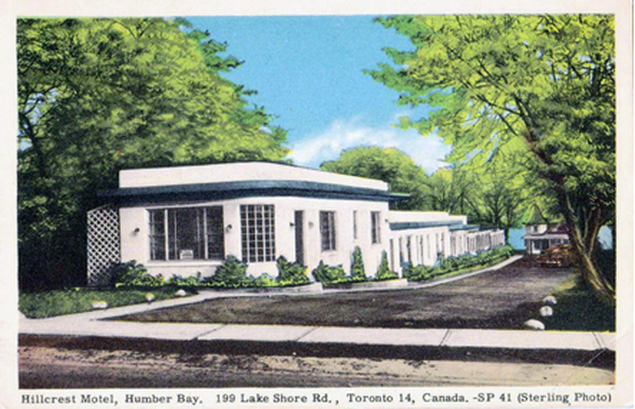 Postcard of the Hillcrest Motel with classic Art Moderne architecture ca 1930s. (Source: Unknown)
Perhaps the grandest structure built on the lakeshore was the Palace Pier, named for a famous pier in Brighton, England.  In 1927, entrepreneur Frederick Bohin hired architects Craig and Madill to design an 1800 foot long pier in a Moroccan style with a ballroom, palace of fun, band stand and theatre. Shares were sold at $10 each and the cornerstone was laid in 1931. Because of the Depression, only the 250 foot long ballroom was built, and its opening was delayed until 1941. The Palace Pier became a popular dance and music venue through the 40s and 50s, featuring performers like Duke Ellington, Harry James, Count Basie, Tommy and Jimmy Dorsey, and Cab Calloway. However, in 1963, it was destroyed in a fire started by an arsonist.  In 1978, the Palace Pier condominium was built on the site, followed in 1991 by the Palace Place tower. One original Palace Pier footing remains on display on the Waterfront Trail. 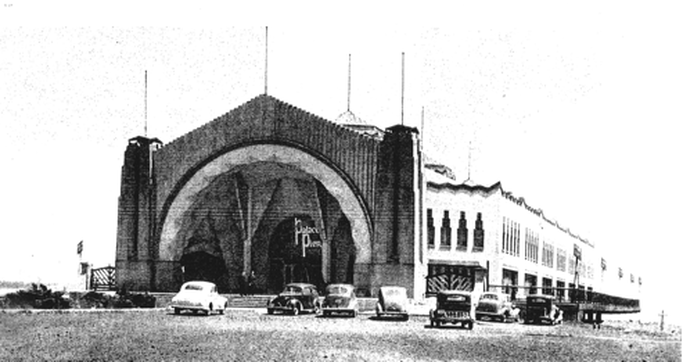 The Palace Pier (Source Unknown)
Another well-known Humber Bay boat builder was Hans Sachau who emigrated from Germany in 1928 with his wife Anna. In 1931 Hans founded Sachau Marine Construction on the south side of Lake Shore Bl. W., east of Park Lawn Rd. (then called Salisbury Av.) He built cruisers and sailboats.  During WW II, Hans was contracted to build Fairmile motor launches for the Royal Canadian Navy.  He also made fins for Mosquito Bombers and designed rehabilitation equipment for war veterans. Anna started a restaurant and inn on their property called The Dutch Sisters, named for their three daughters.  The property was sold in the 1960s and the new owner rebuilt the inn in a Spanish style, renaming it Casa Mendoza.  This business was demolished in 2012 and replaced by a condo. 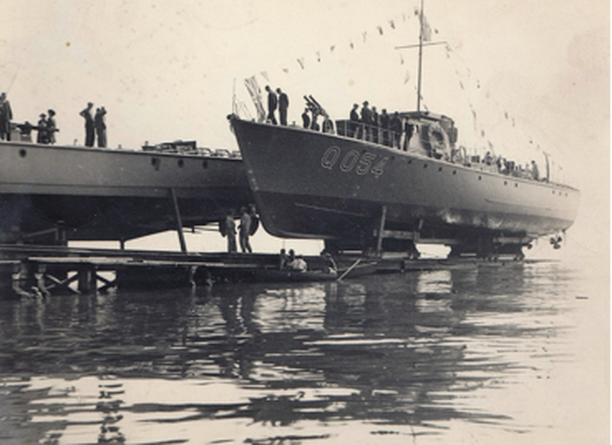 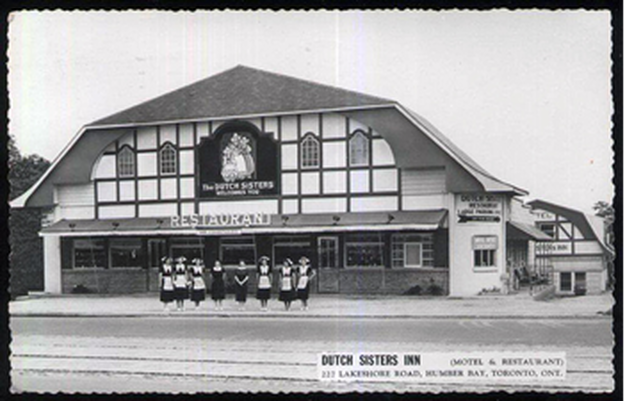 Postcard of The Dutch Sisters Restaurant. ( Source: Elsa Ann Sachau Pickard)
The motel era reached a peak in the 1950s and then the area began to decline as people began to travel further afield and by airplane.  The area became known as “The Motel Strip” and consisted of 33 parcels of land owned by 25 individuals or groups. One generation’s dream of modern tourism was replaced by decay, crime, drugs and hookers in the increasing number of motels that had absentee landlords. One night in 1959, the Reeve of Etobicoke and the Chief of Police watched while one motel unit was rented 14 times, confirming that change was required.  Despite the creation of 18 major taxpayer-funded studies during the next 35 years, it was not until 1995 that a plan was finally approved by the province. The plan included condominium residences, a new Marine Parade Drive along the waterfront, a connection to the Waterfront Trail, and extensive parkland.

To the north of the waterfront, a triangular area bound by Lake Shore Blvd. W., Park Lawn Rd. and The Queensway (originally Queen St.) has also seen many changes. Originally this was farm land.  The railway was put through the area in 1853 and the Queen Elizabeth Way in 1940, effectively splitting Humber Bay in two - twice over. There were once five brickyards in this triangle. The largest one was established by Henry Butwell in 1894.  It employed 40 men making five million bricks a year. His son Richard operated this yard at least until the 1930s, making red and buff soft mud bricks from local sandy clay. Other early industries included Carson Cement Block and Humber Coal and Supply. 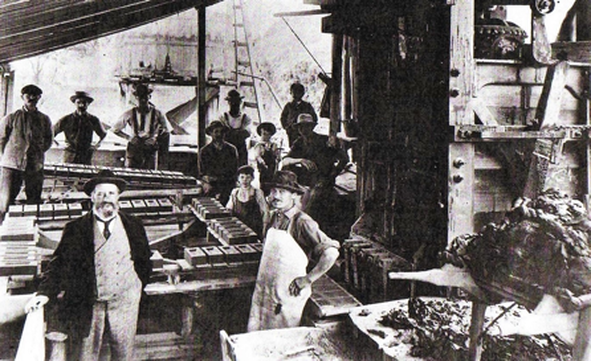 Butwell’s Brickyard ca. 1900. Owner Henry Butwell at front left. (Source: Ron Butwell)
In 1948, Christie Brown & Co. built a large bakery between the CN tracks and Lake Shore Bl. W.  The bakery operated 24-7 and employed 600 in the plant, in addition to managers and office staff. It closed in 2014, the land was sold, and as of 2016 it is awaiting development.

The area north of The Queensway was very hilly, but ideal for small-scale market gardening on lots ranging from two to 20 acres. The farmers would plough their fields with one or two horses, and then use the horses to deliver their produce to markets in Toronto. Some well-known gardening family names included Todd, Reid, Harris, Bell, Cox, Reeve, Brown, and Whitworth. 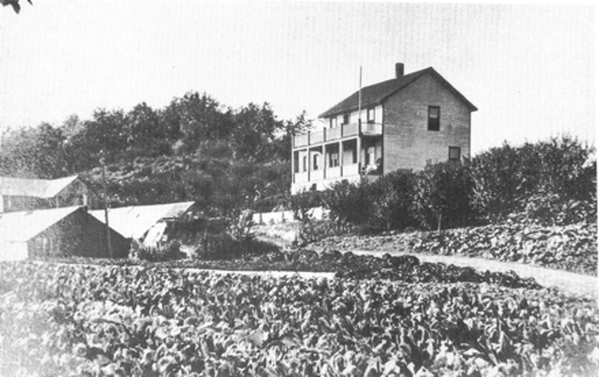 The Reeves family house and market garden on Berry Road at Stephen Dr. (Source: Giles Family)
By 1916 an ad hoc farmers’ market had been established on the southeast corner of Park Lawn Rd. and The Queensway. This market also drew farmers from as far away as Burlington who came to sell their wares and were met by eager buyers from downtown Toronto. In 1954, the current 56 acre Ontario Food Terminal opened in the same place. It is the largest wholesale fruit and produce distribution centre in Canada, and ranks number five by volume in North America. It has 6000 registered wholesale buyers who do business year round. 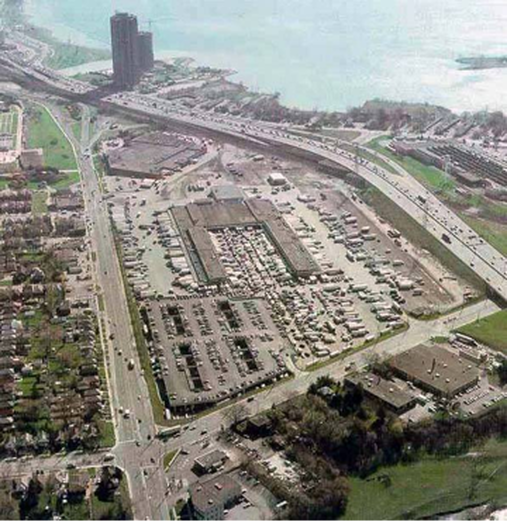 Aerial view of the Ontario Food Terminal in 1992, looking east. The high rise buildings in the distance are the Palace Pier and Palace Place condominiums. West of them can be seen the strip of motels along the shore of Lake Ontario. (Source: Ontario Food Terminal)
The area north of The Queensway also developed as Humber Bay’s primary residential area. As a result, it was also the location of community services, such as schools, churches, the library, retail stores, a volunteer fire service, and community organizations. After market gardening died out post World War II, more housing, including low rise apartment buildings, were built.

Originally children attended school in Mimico, but in 1888 Humber Bay was designated as School Section No. 11 and held their first local classes in a former house on High St. Humber Bay got its first purpose-built school in 1891, and then an even larger new school in 1923.  Today, students attend Etienne Brule Junior School or St. Mark Catholic School on Cloverhill Road.

The Humber Valley Golf Course opened on hilly land on the west bank of the Humber, north of The Queensway, in 1920. In 1954, that land was taken over by Metro Toronto, who kept 39 acres for parkland, using the remaining 67 acres for the Humber Bay Wastewater Treatment Plant.

Humber Valley Golf Course Clubhouse in 1954 (Source: Montgomery’s Inn)
Today, the Humber Bay waterfront is bracketed by two award-winning pedestrian/bicycle bridges over the Humber River on the east and Mimico Creek on the west.  For the Humber River, a 1994 design by Toronto Architects Montgomery & Sisam is based on the Anishinabeg story of creation, with the bridge arches representing a turtle’s back and the pattern between the arches representing eagles. The Mimico Creek bridge was designed in 1998 by Delcan Corp. of Markham and Dr. Santiago Calatrava of Spain.  It is the only single-span reverse-inclined arch bridge in North America.  The bridge’s architecture creates visual tension in the viewer as one’s need for stability is challenged by the apparent precariousness of the bridge’s side arch.
​ 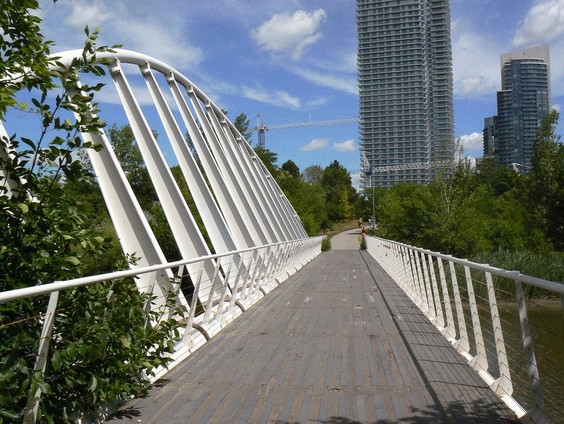