Note: This is the second of two stories about Mimico residents, commemorating the 100th anniversary of the Ontario Ministry of Labour.
You never know what you’ll find when you delve into your family’s past. Steve Hornell was surprised to learn his grandmother wasn’t just a good-natured, old lady who mischievously hid a giant Cadbury chocolate bar for him whenever he visited. She was among the first inspectors to work for Ontario’s Department of Labour back in the 1920s and 1930s.

“I didn’t know that at all,” says Steve, now in his 60s and retired from the banking industry. “She was just my grandmother and she gave me chocolate. I just thought of her as a friendly old lady who lived by herself in an apartment in a house in Mimico by the lake,” Steve recalls. But her upbeat personality lay in sharp contrast to the tragedy of her past.

Mrs. Hornell began working for Labour about 1923. She was in her mid-40s and likely needed the work. She had emigrated from England in 1908, arriving by ship from Liverpool. She had landed in Quebec and her destination was Toronto. She married in 1913. She was 35 – considered an old age for a woman to marry in those days. Her husband John Hornell, a furniture manufacturer of Scottish descent, was from Western Ontario. He was just over 40.

Mrs. Hornell was still virtually a newlywed when less than two years later, in 1915, her husband unexpectedly died of a heart ailment at home. He left her in tragic circumstances — with a toddler son, John Henry, nicknamed “Jack,” born a year earlier, and another child on the way. Mrs. Hornell gave birth to daughter, Jean, three weeks after her husband died. In 1921, tragedy struck again when Jean died at Sick Children’s Hospital of a blood disorder. The little girl was only five years old.

Although no records exist to explain how Mrs. Hornell supported her young children during those early years, her grandson guesses his great uncle Harry Hornell (the brother of Gertrude’s husband) may have helped her. He was a successful Toronto clothing manufacturer who owned Hornell Fashion Waist Co.

Whatever terrible grief Gertrude may have privately harboured, she managed to put it aside, becoming an integral member of the Factory Inspection Branch at the Department of Labour in the 1920s and 1930s. The team was small by today’s standards. By 1929, there were just 20 inspectors – six of whom were female. The men were called “inspectors”, but Mrs. Hornell and the other women were called “inspectresses”.  The inspection staff were based in Toronto, Sault Ste. Marie, Hamilton, Ottawa, Stratford, Kingston and St. Thomas. Mrs. Hornell was assigned to Toronto’s southwest district extending down to the Niagara Peninsula. 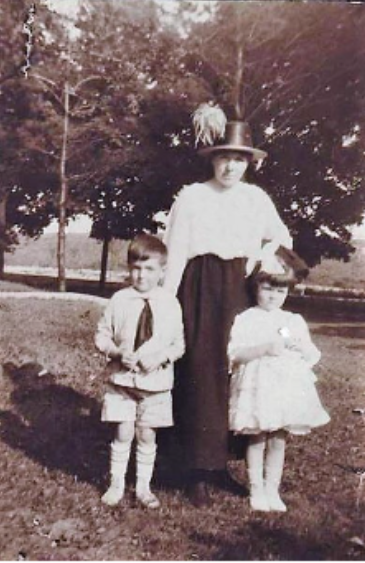 One of Ontario’s first inspectresses, Gertrude Hornell, with her two children.
The branch administered the 1913 “Factory, Shop and Office Building Act” which helped safeguard the lives and limbs of workers through plant inspections and by having protective appliances attached to machinery and buildings. They promoted worker health and safety through effective sanitary arrangements and limited the length of the working day and week for women and young persons to no more than 10 hours a day and 60 hours a week.

In 1922, the inspection staff did 18,528 inspections of Ontario workplaces. By 1933 the number of workplace inspections had risen to 22,364 - a considerable number for the time. By comparison, almost 100 years later, in 2016-17, the Ministry of Labour health and safety inspectors conducted more than 79,800 field visits.

Annual reports in the 1920s and 30s suggest Gertrude and the other inspectresses focused on safety and other issues involving women, children and youth in the workplace. A precise description of their duties is not available so it is unknown whether they also delved into issues involving adult male workers.

In those early years, conditions at Ontario workplaces were still relatively poor, but improving. Health and safety were relatively new concepts. Minimum wage was also quite new and it only applied to women and girls until 1937.

Gertrude wrote a summary of her inspection findings almost every year while she was at the Department of Labour and her observations appeared in annual reports. In 1925, she was also quoted in a Toronto Daily Star news article entitled, “Girls Take Chances Losing Their Scalps: Factory Inspectors and Employers Find  It Hard  to Make Them Wear Caps at Work.”

“Upon reviewing the improvement in employment of females, as compared with conditions existing a decade ago, the value of frequent inspections is realized,” she said. “Lunch rooms are supplied in order that meals can be partaken of away from the workroom. Cafeterias and rest rooms provided in some establishments are enjoyed by employees and assist in increasing zeal and more efficient work.”
You can almost hear Gertrude’s thick British accent as she would have spoken the words. “She called me ‘ducky’ and was very, very British in her manner and in her speech and she had a kind of witch’s cackle,” her grandson fondly recalls of his grandmother. “My nickname for her was “Danna.”

His father, Jack, a Globe and Mail sports copy editor, would take him to see his grandmother at her second-floor apartment in a large Tudor-style house on land that was once part of the “Hunter Estate” in Mimico. The home was purchased in 1915 by Harry Hornell. Later converted into four apartments, the Hornell family called the home “The Big House.” Harry’s son, David, was an RCAF Flight Lieutenant during World War II, earning a posthumous Victoria Cross for his valour and devotion to duty.

Steve Hornell was Gertrude’s only grandchild. By then, her hair was white, tied up always in a bun, and she wore spectacles. She looked like Queen Victoria, only with glasses. “I would go through the door and immediately look for a 200-gram Cadbury chocolate bar in foil wrap hidden somewhere,” Mr. Hornell recalls. “It could be anywhere – in an underwear drawer, behind a toaster in the kitchen. I guess it gave me something to do while my father and grandmother were talking about stuff.”

In the early 1950s, when he was very young, Mr. Hornell and his parents lived with his grandmother at her 50 Mimico Avenue home, but he has no memory of those early days. Later, as he became more aware, it never crossed his mind that his grandmother might have once had a job – never mind worked at the Department of Labour. She never spoke of it and Steve never thought to ask. “She was already 72 when I was born,” he says simply. “By the time I had awareness, she was an octogenarian. As a child, you think old ladies don’t work for a living.”
​
In 1962, Steve Hornell’s father moved Gertrude to a nursing home. She had developed Alzheimer’s. His last memory of her was when he was about 11 or 12. “I remember accompanying my father to the old age home. She greeted him and said, ‘Who’s that nice young boy you have with you?” When she didn’t recognize me – I don’t know if she recognized my father either – my father in his wisdom thought that was pretty upsetting for me. He never brought me back and that was the last time I saw her.” 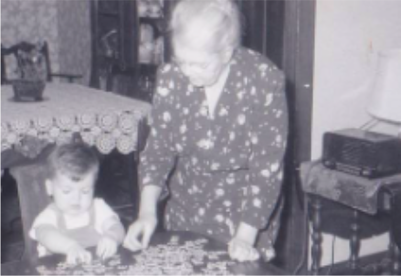 Proud grandma Gertrude with her grandson Steve.
Gertrude died in 1969 at the age of 90. “I remember going to a little private funeral service at the Mount Pleasant Cemetery,” the grandson says. “It was just the three of us – my father, my mother and me. I remember it was the only time I ever saw my father cry.”
His grandmother’s achievements may have been unknown to Mr. Hornell until recently, but as an early inspector, her legacy lives on in Department of Labour records. This information came as a complete surprise to me,” Mr. Hornell says of his grandmother’s background, “Given what I now know, I’m mightily impressed with my grandmother’s courage and resourcefulness in the face of multiple tragedies. It was an age when women just didn’t do (I believe) the kind of work for which she became responsible.

With special thanks to Steve Hornell, who searched through boxes in a shed to locate photos of his grandmother for this article. Special thanks also to Denise Harris of the Etobicoke Historical Society who helped trace Mrs. Hornell’s life before she became an inspectress. Special thanks also to the Archives of Ontario for providing access to old Department of Labour records. Belinda Sutton is the Senior Communications Officer for the Ministry of Labour.
View More People