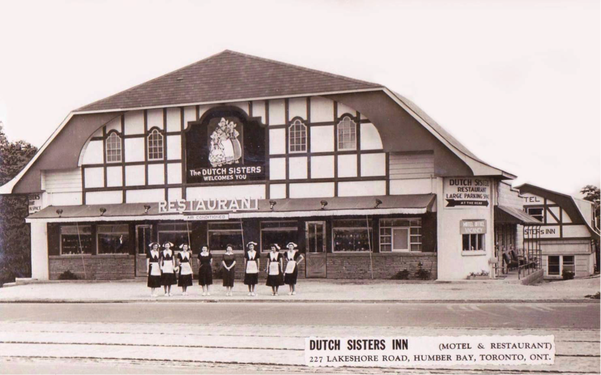 Postcard of the Dutch Sisters Inn on the south side of today’s Lake Shore Boulevard West. A corner of the motel can be see on the right. (CHUCKMAN)
Hans and Anna Sachau immigrated to Canada from Germany in 1928 and each of them, individually, built a highly successful business adjacent to their new home in Humber Bay.

Hans was a former Naval architect. In 1931, he founded Sachau Marine Construction to build all types of boats from seafleas and runabouts to cruisers and fixed keel sailboats. His property included water rights 600 feet into the lake to accommodate a marine railway.

His reputation as a skilled craftsman grew quickly, and in 1939 he built the Alvee, a 60 ton, two-masted sailboat and the largest sailing vessel on the Great Lakes since LaSalle’s Griffin 261 years earlier.

During WW II, Hans was subcontracted by the Greavette Boat Company in Gravenhurst to build at least 3 Fairmiles for the Royal Canadian Navy. These 112 foot long motor launches were posted in the St. Lawrence River and Gulf of St. Lawrence to escort convoys, run patrols, handle port defense and perform rescues. Each held three officers and 14 crew, and carried three 20 mm guns.

Sachau’s skill was not limited to boat building. He made fins for Mosquito Bombers and designed rehabilitation equipment for returning war veterans. He patented pre-cast concrete panels that could be used to build a house from foundation to roof in 1 ½ days. They were used in the 1950s to build homes in Alderwood and Rexdale.

Meanwhile, Anna started a breakfast counter in their home, calling it The Dutch Sisters after their three daughters: Greta, Elisabeth and Elsa-Ann. Although the girls were actually of German descent, she thought it prudent to avoid references to Germany during the war. The business was such a success that she soon opened a large restaurant in a new building designed by Hans. For almost 40 years it was the site of many meals and special events under a charming sign showing three little girls in traditional Dutch costumes. Advertised as the “most unique restaurant in North America”, it had five dining rooms serving steak, lobster and “continental” dishes such as smorgasbord, sauerbraten and apfelstrudel. The restaurant was so well known that Monarch Flour used Anna as their spokesperson in print ads across Ontario, including her recipe for gugelhupft cake.

Soon after this, the Sachaus added motel units and the business became The Dutch Sisters Inn. In 1953, as the age of wooden ships was fading, Hans built his last boat, The Dutch Boy, and closed his shipyard. Anna passed away of cancer in 1958 and Hans managed The Dutch Sisters Inn on his own. He died in 1963 and his executors continued the business until 1969.
​
The property was sold and a new owner rebuilt the inn in a Spanish style, renaming it Casa Mendoza - a popular dining spot and motel for many years. It was sold to a developer and closed in 2012, and has now been replaced by a condo tower.